Thank you Dartmouth. This is truly an honor. President Hanlon, distinguished trustees, members of the faculty, ladies and gentlemen, Class of 2016.

I would like to say congratulations to the Class of 2016, especially to the African students who endure the New Hampshire weather. The craving for kenkey, banku, eba, and all of the African food you couldn’t find. To students from other parts of the world craving for food that you couldn’t find. I know this because I have to ship food from New York to New Hampshire; my son is a freshman here. Sometimes he takes pictures of the dining hall meal and says, “Salad. This is what we’re having today.”

Congratulations to the parents who had to pray hard, work hard to keep their heads straight to get to this day. Congratulations to the benefactors and the donors and all those who made this day possible. I would like to say thank you all, and I think it’s time for us to make some noise because this place is too cold. Cheer yourselves, Class of 2016!

On a more sober note, I would like us to take a moment just to remember the 20 persons that were killed in Orlando early this morning at the nightclub shooting; 42 are currently in the hospital, and the news outlets are calling it an act of domestic terrorism. Let’s just take a moment of silence.

Growing up in Liberia, we lived in a community that was like a village, even though it was in the city. Our grandmother was our primary caregiver. She was a part of different traditional societies, so we grew up in a place where we saw people dressed differently, walking differently, eating differently, coming into our house and every now and then. Our grandmother was also a frequent visitor to an old lady in the community across the street. This woman lived in a virtual forest, surrounded by the cassava patch, and people were afraid to go in there.

One day, our friends told us that this old lady was a witch and that she ate children’s flesh. Instead of keeping quiet, my sister and I decided that night we would repeat this gossip to our grandmother as if it was true. We sat down, and she patiently listened to us as we explained how her friend was a witch and that she would each children’s flesh.

Until that day, our grandmother had never asked us to accompany her to visit this woman. After we repeated this story of the neighborhood gossip, the next morning she said, “We’re going to visit the old lady across the street.” We were crying and falling on the floor and begging her not to take us, and she looked at us sternly and said, “If you don’t come, I will give you the whooping of your lives."

She took us to this woman’s place, and we never stopped going until the old lady died.

Kindly journey with me as I speak briefly to you all on the theme “The Open Mind Challenge.”

Usually at graduations, I tell graduates, “I know you will not remember anything that the speakers say because mostly you’re looking forward to the partying and the eating and the gifts and all of the different things.” But if you don’t remember my mesmerizing beauty, kindly remember the topic “The Open Mind Challenge.”

We live in a world today that is totally messed up, a world that is filled with problems from north, south, east, and west. There are problems everywhere.

In my recent address on January 19, 2015, I told the Security Council, “We all live in a world of extreme fear. A world where the joys of our lives have been taken from us. Today we live in a world where freedom of expression is challenged, freedom of speech is challenged. If you are a woman, depending on what part of the world you find yourself, bodily autonomy is a thing of the past. We seem to be going backward instead of forward.

In our world today, in Africa we have tons of war going on. We have 29 countries on the continent engaged in war.

In the Middle East, you have over 267 insurgent groups fighting for different reasons.

In Europe, there are 10 countries and there are 80 militia groups.

In Asia, there are 16 countries and there are about 164 insurgents and militia groups.

I can go on counting, because that’s what I do: Look for miserable stories to make me angry to keep my work going.

From January to June, there have been 670—if you add this morning in the U.S.—671 terror attacks in the world.

On one singular day, it is alleged that 250 persons were beheaded in Iraq.

This is the world that find ourselves living in. The question we want to ask ourselves is, “What has happened to our world?” And the response that many of us give in the midst of this extreme violence or the way we come to terms with it, is to build invisible walls between ourselves and those who look different from us. Whilst there are borders between states, we have built many borders in our communities, schools—and sadly—religious institutions.

The problem with the borders that we have built is that they leave no room for others to cross, because mentally, people have transcended from being humans to being objects of violence based on the groups that they represent. So most times when I travel—and I do that like 300 days in a year—based on how I dress and the way I look and the country I find myself in, I’m immediately spotted as a possible migrant. Most times, when people see a Muslim person dressed, they see them as a possible jihadist based on where they find themselves. In most instances, people see young black men and they get afraid, because in their mind and based on the walls that they’ve built, these are possible thugs.

These borders have led nations to wars and have led to genocide. In Rwanda years ago, people were not seeing Hutus and Tutsis; they were seeing cockroaches and snakes. When you see these things, your natural inclination: "Kill them." In 100 days 800,000 people were slaughtered.

Our world is upside down. Fear and the politics of division have taken over. We are slowly losing our common humanity. Today when people mention refugees or migrants, it sends waves of fears in communities. People draw conclusions and work up negative energy and emotions without even engaging.

It is time for us to engage. Refuse to join what is trending. Refuse to be hostile to what you haven’t investigated or engaged.

We must begin to take “The Open Mind Challenge,” making conscious efforts to cross borders of fears, tearing down the invisible walls that lead us to peace rather than divisions. In Liberia, we have a saying: “A stranger that asks questions never loses his way.”

His Holiness the Dalai Lama put it very well: "Every one of us in this place wishes to live in peace, but we are often confused about how this can be achieved. We need to appreciate that genuine peace comes about through mutual understanding, respect, and trust."

Let me leave you with the words of Dr. Martin Luther King, Jr: “The good neighbor looks beyond the external accidents and discerns those inner qualities that make all people human and, therefore, siblings.” 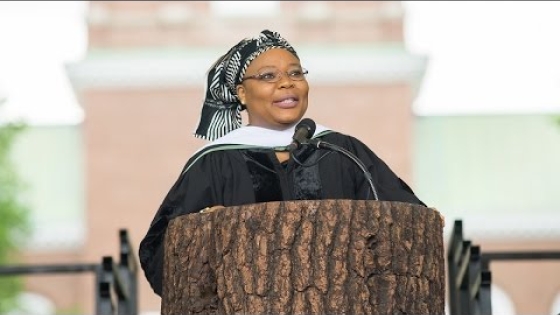 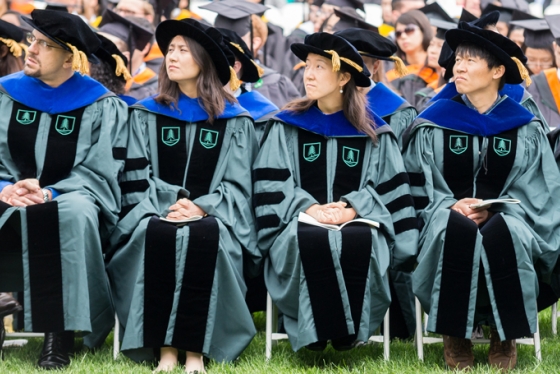 Date
6/12/2016
Body
2016 Valedictory to the Graduating Seniors by President Phil Hanlon ’77So graduates, your day has finally come. Even though the day is cool...
Image
Thumbnail 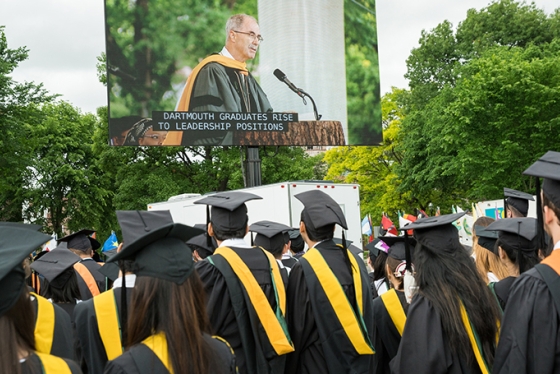