Nachtwey is an “insightful witness of human suffering,” say the award judges. 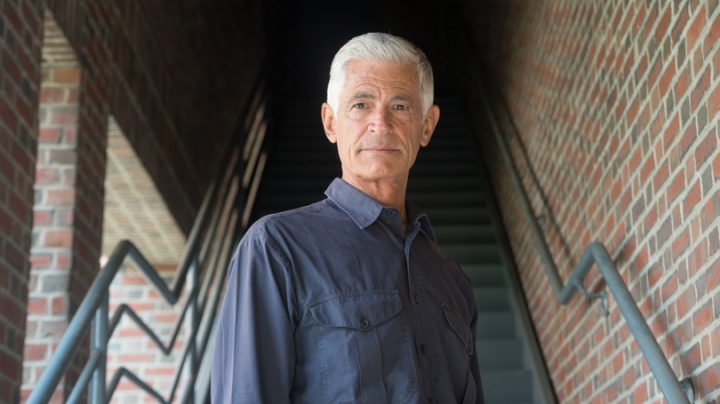 Photojournalist James Nachtwey ’70 says he was honored to receive the award and “to be in the company of so many outstanding individuals and organizations who have been inspiring and influential to me personally and to millions of others.” (Photo by Eli Burakian ’00)
6/21/2016
Body

Photojournalist James Nachtwey ’70 can add another award to the long list of honors he’s garnered for documenting conflict and crises worldwide.

Spain’s Princess of Asturias Foundation has given him a 2016 Award for Communication and Humanities, which brings a cash prize of 50,000 euros and a Joan Miró sculpture.

The foundation gives eight awards annually for “creative and investigative work in any type of humanistic activity” that “represents an outstanding contribution to universal culture.”

Responding to the award on the foundation’s website, Nachtwey said, “It is a great honor to receive the Princess of Asturias Award for Communication and Humanities, and to be in the company of so many outstanding individuals and organizations who have been inspiring and influential to me personally and to millions of others.”

Nachtwey’s mostly black-and-white photographs show, sometimes at close range, the human toll taken by war, natural disasters, famine, disease, and drug addiction. He’s traveled with his camera to more than 30 countries in Central America, Europe, and Africa with, according to a statement from the foundation, “the firm objective of provoking a reaction in the viewer faced by genocide, hunger, poverty, and the suffering of others.”

As an undergraduate at Dartmouth, Nachtwey studied art history and political science. Inspired by images from the Vietnam War and the Civil Rights movement, he decided to become a photojournalist, starting as a newspaper photographer in New Mexico and later moving to New York to launch the freelance career that has often placed him in danger. He has been a contract photographer with TIME magazine since 1984.

Nachtwey returns occasionally to campus to lecture and present his work, and spent the 2012-13 academic year as the inaugural Roth Distinguished Scholar.

In addition to the Princess of Asturias award, which will be presented this fall at a ceremony chaired by the king and queen of Spain, Nachtwey has received the Robert Capa Medal from the Overseas Press Club of America (OPC) five times, the Magazine Photographer of the Year Award seven times, the Infinity Award from New York’s International Center of Photography three times, the World Press Photo Award twice, and the French Prix Bayeux-Calvados for War Correspondents twice. He received the Alfred Eisenstaedt Award for Magazine Photography from Columbia University and the OPC President’s Award. Nachtwey has also won a TED Prize and a Heinz Foundation Award, and is the subject of the Academy-Award nominated documentary War Photographer.