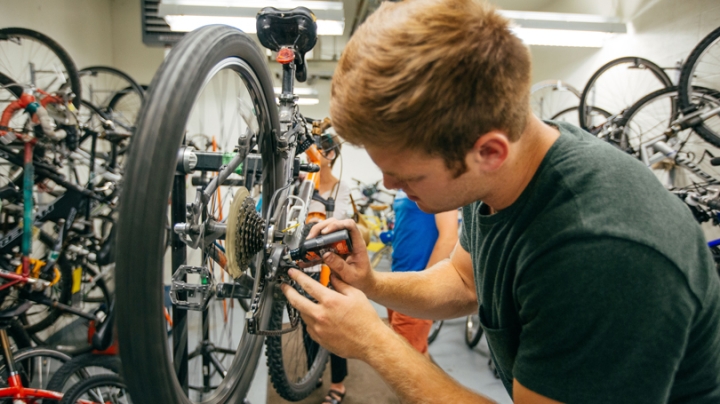 Forrest Town ’18, a co-manager of Dartmouth Bikes, oils the rear derailleur at the bike shop in Fahey-McLane Hall. (Photo by Robert Gill)
7/25/2016
Body

Each term, lots of students bring bicycles to Dartmouth, or buy them when they arrive, and use them for basic transportation and recreation. But often, when they leave campus, they leave their bikes behind, rusting in racks. There are, on the other hand, plenty of riders who need affordable bikes. Five years ago, Dartmouth Bikes, part of the Dartmouth Sustainability Project, tackled both problems with one program: The student-run group collects and refurbishes abandoned bicycles and rents or sells them to members of the College community.

The organization also offers bike clinics some evenings outside its basement repair shop in Fahey-McLane Hall. As many as 50 riders show up to get quick, affordable repairs—only five dollars per half hour of labor.

Luke Brown ’18 brought a beat-up black bike he got for free from a graduating senior this spring.

“The frame is OK,” he told repairman Ralf Carestia ’18, “but the brakes don’t work very well, and I can’t shift gears.”

“It’ll need a lot of TLC,” Carestia said, as he peered at the wheels and a worn-out chain. “But it’s brimming with character.”

If this vintage set of wheels hadn’t been passed along, it could have ended up in a landfill. Each year, at least 100 bikes are abandoned on campus—but now, many get a second lease on life.

Every few months, members of Dartmouth Bikes check racks for bicycles that seem to have been forgotten. They attach tags to the handlebars of any seemingly abandoned bike, asking the owner to either move it or lose it. On a recent search, they tagged about 50 apparent castoffs. After two weeks, wearing orange vests and driving a rented pick-up truck, they cut the locks off bikes that haven’t had their tags removed and take them to a storage room. Latest haul: a dozen.

If the confiscated bike has been properly registered with Dartmouth Safety and Security, the owner is notified and allowed to reclaim it. Four weeks later, unclaimed bikes become the property of the College, and can be rented or sold.

In the Fahey-McLane Hall repair room, where dozens of bikes hang from the ceiling or stand in rows on the floor, Fabián Štoček ’17 has spent countless hours getting his hands greasy. Formerly a co-director of the bike program, he is now a senior mechanic who advises the two new co-directors, Ryder Stone ’18 and Caleb “Forrest” Town ’18. All three have ridden for Dartmouth cycling teams. Two more mechanics recently joined the crew: Carestia ’18 (a unicyclist) and Leo Blooston ’17.

Štoček got involved with Dartmouth Bikes so he could do his own repairs. To promote sustainability, he likes fixing other peoples’ bikes, too. The College has an official bike policy governing use and storage, and Štoček says there are plans for more safety training. He wants to encourage bikers to use roads, not sidewalks.

He and the new co-directors would also like to increase the clientele for Dartmouth Bikes’ repair services, which are open to all students, faculty, and staff. Regular maintenance customers include President Phil Hanlon ’77 and his wife, Gail Gentes.

They take good care of their bikes, says Štoček. But he laments that “a lot of students come to Dartmouth in the first year and just go to Walmart and buy a cheap bike. Maybe it lasts a term, and in the winter it gets forgotten and they are left without wheels, and the campus ends up with all these bikes just sticking around.”

Rescuing those discards frees up rack space and keeps wheels in motion, limiting the number of new bikes that have to be bought. “That conserves aluminum resources,” Štoček says.

“It’s good doing something that has impact,” Stone agrees. “And I like using my hands.”

“It’s really not that all that practical for students to get around Dartmouth by car,” says Town. Parking space is hard to find, he notes, and it’s often quicker to get to classes on two wheels than on four.

In 2014, students enrolled in Professor Richard Howarth’s environmental studies class wrote a detailed report, “Making Dartmouth a Bike Friendly Campus.” Among its recommendations: a bike-share service. Soon, the authors will get their wish.

Starting this fall, there will be a rental program similar to the Zip Car service, says David Newlove, associate vice president for business and hospitality. Eight racks at strategic locations on campus will hold about 50 bikes. “If you need a bike, you go to one of the stations, use an app on your mobile device to unlock it, ride to your destination, and then lock it up at another station,” says Newlove.

The rental rate structure is still being decided. Newlove says there will a membership fee to join, and the first couple of hours might be free. “Basically, you will get a topnotch bike to use when you need it, and you don’t have to worry about storing or maintaining it.”

The bikes will bear the Dartmouth logo, but they will be supplied by the national rental company Zagster, whose bike mechanics will keep them in running order.

“If we can get students and staff to bike onto or around campus instead of bringing their cars, that frees up parking spaces for people who really do need to drive in,” says Newlove. And, he adds, a well maintained reusable fleet shrinks Dartmouth’s carbon footprint.