The former president returns to the College in the final weeks of the race. 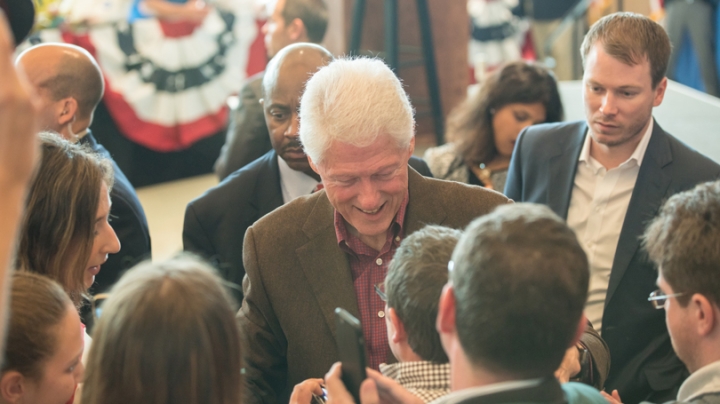 With three weeks to go before the presidential election, former president Bill Clinton came to Dartmouth to campaign for his wife, Hillary Clinton, along with Democratic candidates down the New Hampshire ballot, telling a large audience that their votes next month will determine the direction of the country.

“You’ve got a chance to be part of something,” Clinton said. “You cannot give this country’s future away.”

Clinton spoke for more than an hour in Alumni Hall to a crowd of about 470 from Dartmouth and the Upper Valley, with another 300 people watching on video in an overflow room at the Hanover Inn. The president’s remarks touched on a number of subjects, ranging from supporting nanotechnology research and development to bring economic opportunities to Appalachian coal country, to suspending student loan debt payments for entrepreneurs starting new businesses.

While Dartmouth has long been a stop on the campaign trail during New Hampshire’s first-in-the-nation primary, it’s rare that GOP and Democratic candidates or their surrogates return to Hanover during the general election. A long line of presidential hopefuls, both Republicans and Democrats, visited Hanover in the run-up to the February primary.

With New Hampshire this year considered a swing state by both political camps, state senator Martha Hennessey ’76, a Democrat running for reelection, said the get-out-the-vote effort at Dartmouth is critical.

“The students here can make a very big difference. When Sen. Jean Shaheen (D, N.H.) was running last time around, Dartmouth students really helped bring her over the top,” Hennessey said. “They literally can help decide this election.”

Bill Clinton was introduced by Colin Van Ostern, Tuck ’99, a Democrat running to be New Hampshire’s governor. Van Ostern talked about taking his Tuck experience and private sector work into public service, and he warmed up the crowd with a nod to Hillary Clinton’s “Stronger Together” campaign sign behind the podium.

The Dartmouth Aires a cappella singers got the crowd cheering, opening the event with “Sitting on the Dock of the Bay” and “Shama Lama Ding Dong.” Member Jeremy Mittleman ’17 said the group has performed for a number of candidates.

“It’s been amazing seeing all the candidates that come through here in the primary,” Mittleman said.

Jalen Wang ’20, who matriculated in September, didn’t have the chance to see the primary candidates when they passed through campus last winter, but still followed the New Hampshire primary.

“Dartmouth has great opportunities to see and be a part of the political process,” he said.