Hillary Rodham Clinton Shares Insights During a Day at Dartmouth

The former secretary of state meets scores of students and speaks at an overflow Dickey event. 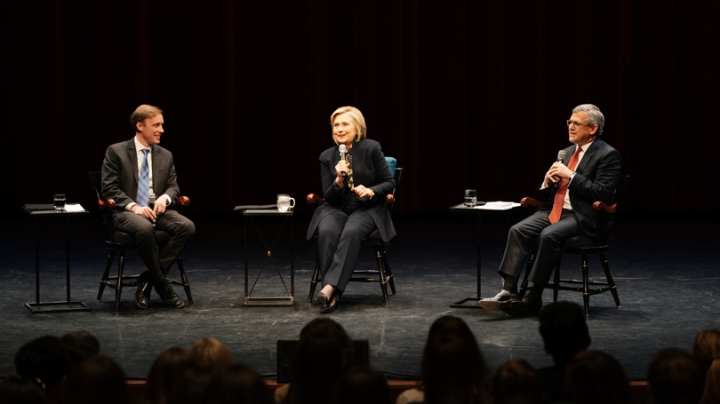 Hillary Rodham Clinton speaks to an overflow crowd at Spaulding Auditorium flanked by the Dickey Center’s Jake Sullivan, left, and Daniel Benjamin, both of whom worked for the former secretary of state as State Department officials. (Photo by Eli Burakian ’00)
5/09/2019
Body

The first question posed to Hillary Rodham Clinton on her visit to Dartmouth came from Jasin Murati ’19 of Park Ridge, Ill., as the former secretary of state met with students in the John Sloan Dickey Center for International Understanding’s War and Peace Fellows program.

Before he could ask how to get young people involved in politics, Clinton stopped him. “You are kidding me. Park Ridge? That’s where I grew up.”

Clinton told the students that young people have the power to change politics, something she says was evident in the 2018 U.S. mid-term election. She answered, in great detail, questions about foreign policy in China, Libya, Afghanistan, and Russia; spoke about her work on gender equality; and offered an analysis of current conflicts in Iran, Saudi Arabia, and North Korea.

After the session, she chatted with Murati about Maine East High School, from which they both graduated. “She started the Republican Club in the same room where I took my first U.S. history class,” Murati said.

Clinton laughed. “Yes, yes, I was a Republican, until I saw the light in my freshman year in college.” 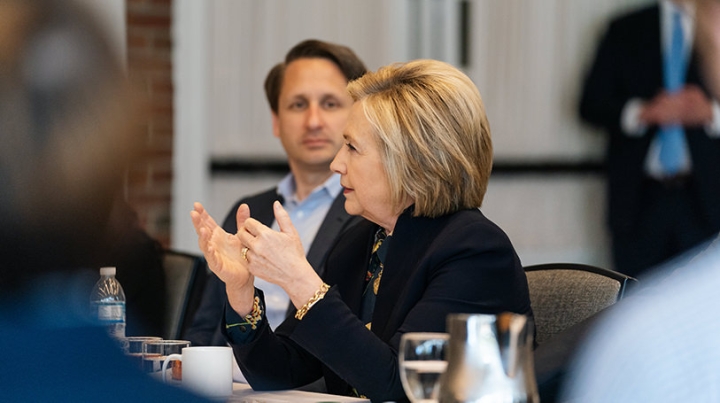 “It’s personally gratifying to be back here with Danny and Jake by my side,” Clinton said of Benjamin and Sullivan. Sullivan was Clinton’s deputy chief of staff in the State Department and foreign policy adviser during her 2016 presidential run. Benjamin worked with Clinton as coordinator for counterterrorism in the Obama administration and years earlier had been a foreign policy speechwriter for President Bill Clinton.

“They really helped move the ball forward on behalf of the State Department,” Clinton told students.

Having the opportunity to meet Clinton was a thrill for Lily Hinec ’19.

“I joined the War and Peace Fellows this year for my senior year and it’s been fantastic. I’ve heard, just in this past week, Hillary Clinton and Timothy Geithner ’83, the former secretary of the treasury. And last fall I got to hear from Jim Mattis,” then the secretary of defense, said Hinec. “Not only do we have incredible access to speakers, but also access to other students who are the next generation of people who are going to be tackling these issues.”

In her public talk, the Obenshain Family Great Issues Lecture, Clinton answered questions from Sullivan and Benjamin and from audience members who had submitted written queries in advance.

In response to a question from Benjamin about Russian interference in American politics, Clinton told the packed auditorium—as well as an audience in an overflow room and hundreds watching a livestream broadcast—that Russia, led by President Vladimir Putin, represented an existential threat.

“Putin has a very clear agenda, which is to weaken not only our democracy, but all of the Western democracies,” she said. The Mueller report concluded that Russia conducted a sweeping and systemic interference in U.S. elections, she said, adding, “We need to stand up to that, and right now I don’t think that will likely occur until we have a new president.”

“And that’s spoken as a person who apparently really annoyed Putin—which I take as a badge of honor.”

Sullivan asked a question, posed by several people, on whether Congress should impeach President Trump.

“I think it’s a mistake to jump to it. I have experience with that, too, as you might recall,” Clinton said to laughter. “I think you take this step-by-step, but you don’t shelve it. It’s on the table, but you deliberately build toward it, or not.”

Clinton said the vitriol and distortion in politics today is made worse by social media. “This is serious now,” she said. “We are really going to have to take back our information.” The press has to push beyond “both-sides-ism” that allows falsehoods to go unchallenged, people need to be more active online to counter hoaxes and lies, and social media platforms need to take responsibility for the content they perpetuate, she said.

Sullivan posed a question several people had asked: “If you had to tell one thing to all the young girls here in America, what would it be?”

“Follow your dreams and don’t let anybody knock you off course or squash them. Don’t listen to the negative voices in your head. Believe in yourself. If you don’t have it now, develop confidence in yourself,” Clinton said.

Over the years, she said she’s seen many barriers women face knocked down—in the workplace, in higher education, in athletics, and in politics. However, internal barriers still stand in the way for women, Clinton said.

“Young men and young women look at their opportunities, and young men—if they have three out of the 10 requirements for a job—think they’ll knock it out of the park. If young women have eight out of 10, they think, well, ‘I don’t have the other two, I’d better not try,’ ” Clinton said.

“So, this is all internal. This is inside our heads. And look, it’s not easy. If you come across as too confident—well, you know what the result can be,” she said to laughter and applause. 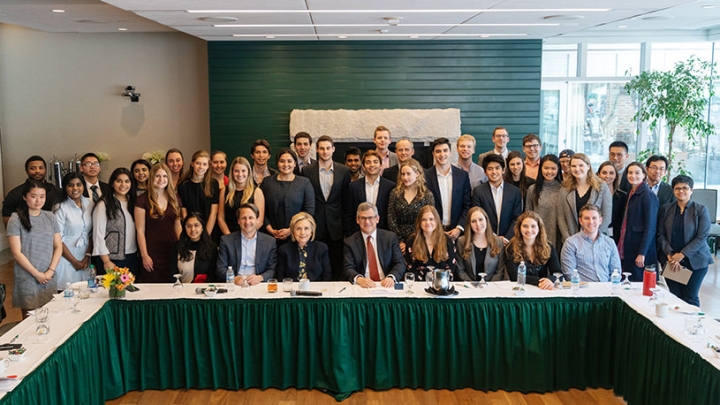 Students from the War and Peace program and U.S. foreign policy and international security postdoctoral fellows pose with Hillary Rodham Clinton after an hour-long conversation with the former secretary of state.