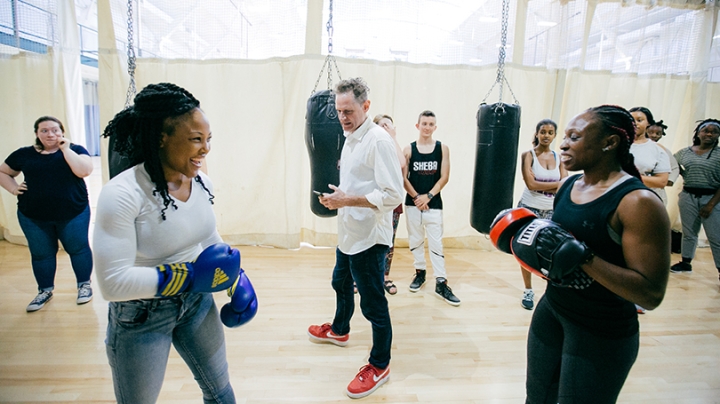 Jesse Shipley, center, a professor of African and African American Studies, invited professional boxers Melissa St. Vil, left, and Ronica Jeffrey, to teach his students about boxing at Alumni Gym. Shipley is making a documentary about the two world champions, who recently spoke to his classes. (Photo by Robert Gill)
10/25/2016
Body

Jesse Weaver Shipley is an ethnographer, filmmaker, and artist who joined the faculty in the African and African American Studies Program this year. His work explores the links between aesthetics and politics by focusing on performances and popular cultures in the midst of changing economic regimes and forms of sovereignty.

Shipley has also been an amateur boxer, and before moving to Dartmouth, spent a lot of time at various boxing gyms in New York. That’s where he met his latest research subjects: two of the world’s best female fighters, Ronica Jeffrey and Melissa St. Vil. Jeffrey lives in Brooklyn, where her parents emigrated from Grenada. St. Vil, also from Brooklyn, comes from a Haitian family. The two professional athletes, who are close friends, have excelled in a punishing, violent sport against towering odds. Yet, unlike male fighters, they struggle to find promoters, get television coverage of their world-class fights, even make a living.

That inequity upsets Shipley. It also gives him a close-up view of racism and sexism in professional sports. He’s making a documentary about the women, and recently invited them from New York to Dartmouth so his students could meet strong female role models who, Shipley says, should be better known.

Jeffrey and St. Vil spoke to two of Shipley’s classes: “Introduction to African Studies” and “African Popular Culture: Violence and Aesthetics.” They talked about the obstacles they face in trying to balance the demands of a grueling sport with the routines of daily life. They’ve had triumphs, but they’ve also been badly hurt, and didn’t gloss over the risks they take each time they step into a ring.

“Boxing was never easy for me; it was always tough,” said St. Vil. “I turned pro, and fought all these tough girls. But I was winning. I had a title fight, and that was a good day for me.”

Jeffrey started boxing to lose weight, but she soon realized that what she loved most about the sport was its mental challenges—the need to stay agile and alert while anticipating an opponent’s every move. “When I started learning things, that’s when I started to really enjoy it. I wanted to do it all the time.”

The two women also like teaching other people to box. After the first part of class dedicated to the boxers’ stories and discussions with students, the athletes led a boxing workshop at the gym where students learned some basic drills and moves. After practicing shadow boxing, defensive body stances, and fast footwork, Tsion Abera ’17 said she hadn’t realized, before this class, that female boxers were so unfairly treated.

“I was surprised that there weren’t any protections or regulations to mediate that inequality between female and male boxers. I was also surprised that there is no real oversight over promoters, who should really appreciate these women and their experiences and their sacrifices just as much as men’s. There shouldn’t be a difference,” said Abera.

It wasn’t a typical Dartmouth class. But for Shipley, teaching need not always be by the book. “One of the key things for me is to create a sense of agency and creative energy,” he says. The female fighters’ careers, he says, raise provocative questions in the classroom. “Boxers’ stories are ways to talk about urban life in America—to examine violence, gender, race, inequality, and the excitement of sport from an angle we don’t often see.” 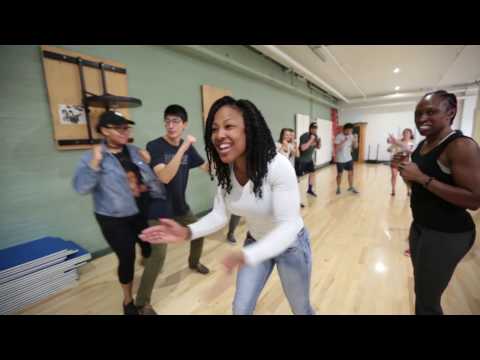 Boxing is just one of many windows through which Shipley views popular culture on more than one continent. He also follows politics and the performing arts, and is the author of two books: Living the Hiplife: Celebrity and Entrepreneurship in Ghanaian Popular Music, and Trickster Theatre: The Poetics of Freedom in Urban Africa.

Shipley is now writing a book about what he calls the “aesthetics of political sovereignty.” It focuses on two coup d’états in Ghana, in 1979 and 1981. “Those coups were moments where there was hope for political liberation, but it very quickly turned into a set of market reforms authorized by the IMF and World Bank,” says Shipley. Now, he says, “we’re at another turning point of transformation or political possibility or impossibility so it’s a key time to look back at that moment.”

The study of Africa, Shipley says, “should not be a specialized interest. Africa is a huge set of multiple places with a huge set of diverse histories, and it’s a major part of the world that continues to be ascribed to a sideline of scholarly studies.”

“I was attracted to this course because it focuses on music and film through the lens of Africa. One thing we’ve been talking about are the ways in which culture and tradition are not stagnant. It’s interesting how traditional music and dance comes from Africa to the United States, gets embedded in the African American community but then goes back to Africa.”

She says Shipley encourages her and other students to reflect candidly on their life experiences during class discussions. “We’ve been asking about the transnational identity of first-generation Africans in America,” she says. “What I am trying to figure out is, what does my proximity to that continent have to be, in order for me to maintain a culture that is mine, even though I wasn’t born there?”

Shipley welcomes such questions. “Students,” he says, “should use different kinds of media to actively observe the world, and to explore their own relationship to knowledge.”