The alumnus, a Dartmouth trustee emeritus, will receive the award Dec. 6 in New York City. 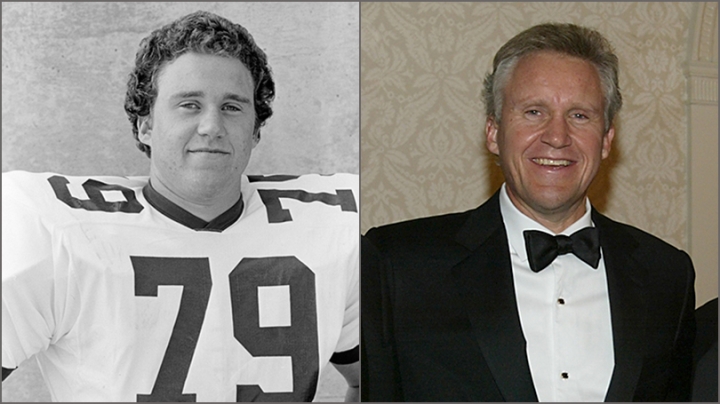 “When I daydream, I don’t think about PowerPoint charts or deals or stuff like that. I daydream about football,” Immelt says. (Photos courtesy of Dartmouth Athletics)
11/22/2016
Body

The National Football Foundation (NFF) and the College Hall of Fame announced this week that GE chairman and CEO and Dartmouth trustee emeritus Jeff Immelt ’78 will be recognized with the 2016 NFF Legacy Award during the 59th NFF Annual Awards Dinner Dec. 6 at the Waldorf Astoria in New York City. The NFF Legacy Award, established in 2007, honors individuals and organizations who have made extraordinary contributions to the NFF and/or embody its mission.

“Nobody better represents our mission than Jeff Immelt,” says NFF president and CEO Steve Hatchell. “A former offensive tackle at Dartmouth, he has paid tribute on countless occasions to the role football has played during his business career, and he has continuously given back to protect the game for the next generation, taking on leadership roles with our Football Matters campaign and again with the recent creation of the Congressional College Football Caucus in Washington, D.C. He has become a true ambassador for the game, and we are extremely grateful.”

In 2013, the NFF unveiled its Football Matters campaign to encourage people to tell why football matters to them. Immelt was featured in the first TV spot, capturing his perspective on the value of his football experiences in running one of the world’s largest and most successful industrial conglomerates.

“When I daydream, I don’t think about PowerPoint charts or deals or stuff like that. I daydream about football,” Immelt says in the video. “When you ask what a CEO does—drives performance, knows how to develop other people, and knows how to set standards—all three of those things in some way come back to what I learned when I was playing football.”