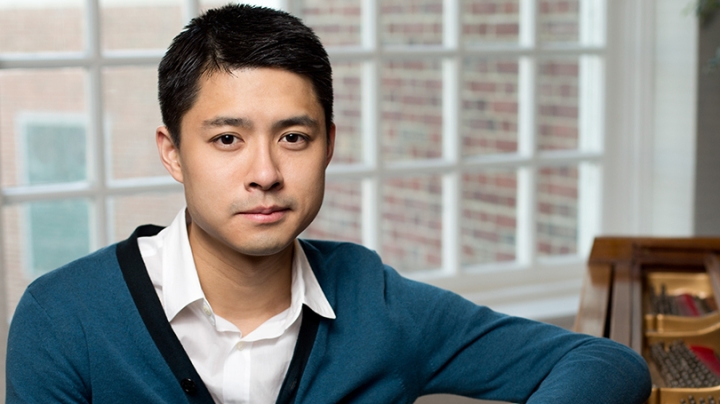 Assistant Professor of Music William Cheng has won the American Musicological Society’s Philip Brett Award for his latest book, Just Vibrations: The Purpose of Sounding Good (University of Michigan Press, 2016)—a manifesto for care and compassion in academia, including his own field of musicology.

“Just Vibrations asks a small question with big answers,” Cheng writes in the book’s introduction. “What is the purpose of sounding good?”

He argues that those whose rhetoric or performance—whether in music or conversation—sounds good within social norms can do well socially and economically, but that doing well is not enough. “My proposal, simply put, is this: what if the primary purpose of sounding good isn’t to do well, but to do good?” he writes.

The Brett Award recognizes “exceptional musicological work in the field of gay, lesbian, bisexual, transgender/transsexual studies,” according to the society’s website. This is the second time Cheng has received the Brett Award—the first was in 2011, for a chapter that later appeared in his 2014 book Sound Play: Video Games and the Musical Imagination (Oxford University Press). To date, Cheng is the award’s youngest and first two-time recipient.

“The book is not really about queer music—it’s not about gay composers or queer theory as such or LGBTQ history or activism,” Cheng says. “What the committee chair said to me was that he thought it was a way of showing people how to be queer as scholars—breaking norms, breaking boundaries, trying to rethink what’s possible and to unthink conventional wisdom.”

Cheng’s book is “a powerful, compelling combination of intellectual rigor and moral compass,” says Provost Carolyn Dever. “His work is a tremendously significant intervention in humanistic thought, deployed toward a vision of hope and mutual caring.”

Just Vibrations grew out Cheng’s personal experience of chronic illness, which not only forced him to reckon with pain, but also changed his relationship to music, which had been a part of his life since before he began to play the piano at around age 4. When he became ill in 2013, he says, “it was hard for me to sit on a hard bench, much less hunch over, so suddenly the piano didn’t fit me anymore, and I didn’t fit the piano.”

Unable to make or even enjoy music, Cheng was forced to reconsider his assumptions about music’s inherent value. “My inability to translate suffering into artistry has in fact made me doubt how much I care about music—a queer thing for a musicologist to wonder,” he writes in his book.

But in some sense, that doubt has allowed him to broaden his perspective. “The model or heuristic I use for this discourse is the idea of listening—not just what we do with our ears, or the intake and processing of audio information, but rather a more metaphorical sense of connecting with other people and ultimately helping other people if possible,” he says.

“The feminist philosopher Eva Feder Kittay says that care is most meaningful when it can least be reciprocated, and it’s most noticed when it’s absent,” says Cheng. “It wasn’t until I started to experience a really desperate need for care that I recognized how valuable it is, and how little we actually speak about it directly.”

Academics are trained to criticize each other’s ideas, he says. “But we’re less trained to do the opposite, which is to praise one another, to find the best in one another, to give certain scholars the benefit of the doubt”—a model that would humanize academia, he says.

In the classroom, this translates into teaching students “to look at their schoolwork as more than the sum of their grades, their achievements, even their intellectual abilities, because I don’t think education is either a necessary or sufficient component of being a good citizen and a good person.”

For example, the book describes an assignment Cheng gave undergraduates in his “Music, Media, and Politics” class: to find a perceived noise violation around campus—loud voices in the library, for instance, or a band practicing late at night. He asked students to “do something about the infraction, or don’t”—and then write about “the social, psychological, and circumstantial factors that drove you to action or inaction.”

The students’ discussion of these choices opened a window to the challenges, and power, of small-scale activism. “We don’t often speak up against public disturbances because, as my students pointed out, these awkward interventions are prone to mark us as peculiar and, in terms of societal expectations, veritably queer,” he writes.

Cheng earned his bachelor’s degree at Stanford University, where he majored in music and English, and went on to receive his PhD in musicology at Harvard. He completed a postdoctoral fellowship through the Harvard Society of Fellows, and joined Dartmouth’s faculty in 2014. In addition to his two books, Just Vibrations and Sound Play, Cheng is the author of several peer-reviewed articles, as well as a number of opinion pieces in popular media outlets, including The Washington Post, Slate, and TIME, thanks in part to support from Dartmouth’s Public Voices Fellowship program.

“I don’t think I could have written this book anywhere but here at Dartmouth,” he says of Just Vibrations. “I’ve felt immensely supported by my colleagues in the music department, by the deans, by everyone. And my students, of course, have taught me a great deal. I’m very grateful.”