Ethics Institute Urges Civic Engagement, on and off Campus 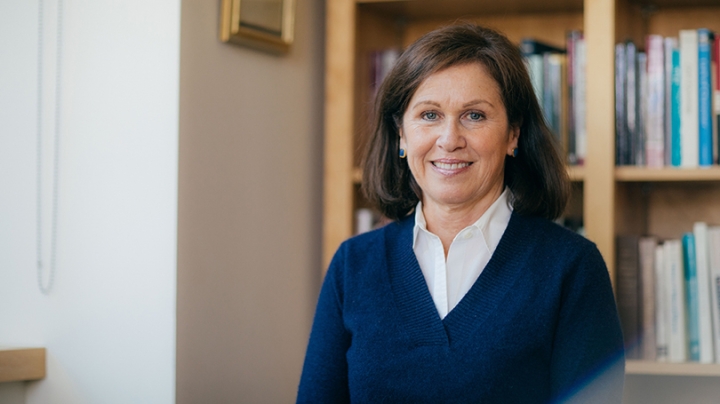 “We have a variety of programs for high school, middle school, and elementary school teachers in New Hampshire,” says Aine Donovan, director of the Ethics Institute. (Photo by Robert Gill)
3/14/2017
Body

With New Englanders heading off to town meetings this spring, it seemed like a good time to check in with Dartmouth’s Ethics Institute, which has as one of its core goals the promotion of civic engagement throughout the Dartmouth experience.

Established in 1982 by a group of Dartmouth faculty, and based on the premise that the privilege of a Dartmouth education comes with a responsibility graduates have to society, the institute has evolved to serve as a resource for the entire Dartmouth community and the Upper Valley at large.

The institute recently held a daylong workshop for high school social studies teachers, called “Student Voice and School Governance.” Director Aine Donovan, who is also an adjunct associate professor of business administration at the Tuck School of Business, spoke with Dartmouth News about how, at the behest of a former Supreme Court Justice, the institute began working with local schools.

How did you begin collaborating on these issues with Justice David Souter?

That part of our work grew from conversations we had after he retired from the Supreme Court and moved back to New Hampshire. He is a passionate advocate for his home state, and he said there was one issue that deeply concerned him—the diminishment of civic awareness in young people in the United States. So a few years ago he pulled together about five or six of us, just for brainstorming sessions. I used to go to Concord once a month. We’d sit in his chambers and have long discussions about how to address this issue. Former Dartmouth President Jim Wright was also very involved in all of this. It took about two years to evolve into a formalized structure called the New Hampshire Institute for Civics Education. It’s run through the New Hampshire Supreme Court Society, and we partner with that institute in a number of ways.

Why do you think Justice Souter was so worried about the loss of civic engagement?

He grew up in Weare, N.H., where he said the pivotal event motivating him toward public service was town meeting. He recalled the entire town’s participation and was moved by the experience. But he fears that people—especially young people— may have become jaded, and are no longer as excited as they once were about participating in the common good and community.

We have a variety of programs for high school, middle school, and elementary school teachers in New Hampshire. It’s not just about making lesson plans, or about how to teach the three branches of government. We encourage a deeper dive into the question, “Why are we in education?” What kinds of students do we want to produce? Are we just preparing them for jobs or are we trying to educate citizens? So the work with New Hampshire’s Institute for Civic Education and our work here with undergraduates often blend together.

Let’s talk about that synergy. How does the Ethics Institute promote civic engagement and citizenship among Dartmouth students?

In many ways—lectures and conferences, research fellowships and funding, an ethics minor, an ethics society, a bioethics society, internships, an ethics hotline. For me it comes back to a philosophy of education. I don’t care what they are majoring in—it could be economics, it could be studio art. But there has to be a connection to the purpose of education. Students should always realize that a Dartmouth education is a privilege, and they should be asking, what do I owe back to society? That’s one reason we give them ways to work with teachers and students off campus.

Can you give an example of that kind of outreach?

Recently I brought a group of students to Bellows Falls, Vt. We went into a junior high social studies class and the Dartmouth students brought case studies of policy issues. One was about the selling of human organs. A typical Dartmouth student might think, of course you can’t sell a kidney, that’s unethical, but in Bellows Falls, where the unemployment and school dropout rates are high, some students might think, I’d sell that, if I could get $50,000. Not only does that kind of frank discussion help the kids in Bellows Falls, it also helps the Dartmouth students see that they are in a privileged position. It gives them an empathetic awareness of what an underprivileged, disenfranchised 13-year-old has as a perspective on the world. So it’s a reciprocal benefit, and we want to do more of that.

What concerns you most about the state of civics education in America?

Social studies is unfortunately left out of a lot of standardized testing, which focuses more on reading, math, and science. So it’s hard for teachers to find time to teach civics in a lot of schools. We want to give them inspiration and resources, like the workshop we just did on voice and governance, so they can share ideas. On that day, they heard a lecture by Marc Brasof of Arcadia University, who has researched the role of student voice in school reform. And they went to Hanover High School, and learned more about the way students govern themselves there. That’s the sort of thing that can make a difference—that they can take back to their classrooms.

Forthcoming Events at the Ethics Institute