CNN news anchor Jake Tapper ’91, one of the recipients, will deliver the main commencement address. 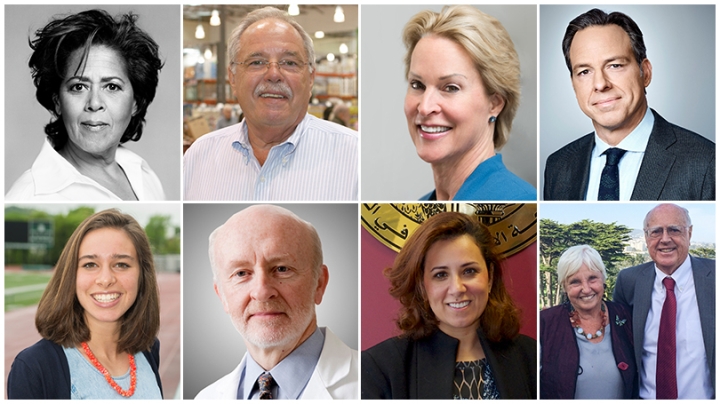 Dartmouth will recognize nine accomplished men and women with honorary degrees at the College’s 2017 Commencement on Sunday, June 11, on the Green.

Award-winning journalist and CNN news anchor Jake Tapper ’91, one of the nine recipients, will deliver the main commencement address.

The academic procession to the Green will begin at 9 a.m., and visitors are advised to be in their seats by 8:45 a.m. Commencement ceremonies will begin at 9:30 a.m.

Founder of the American University of Kuwait

Sheikha Adana Naser Sabah Al Ahmed Al Sabah is the founder and chair of the board of trustees of the American University of Kuwait (AUK), Kuwait’s first and only liberal arts university. Established in 2003 as an independent, private, equal opportunity, and coeducational institution, AUK offers a liberal arts education based on an American model, developed out of AUK’s long-standing collaboration with Dartmouth.

Al Sabah is the chairwoman of United Education Co. (UEC), Kuwait’s leading company in the educational sector. UEC consolidates under its umbrella seven K-12 schools with over 12,500 students. The United Education network includes some of the leading American, Indian, and Pakistani schools in Kuwait.

She is also the chief executive officer of Al-Futooh Holding Co., the major stakeholder in Kuwait Project Co. (KIPCO), a multi-sector operating holding company with a diversified portfolio spanning the Gulf Cooperation Council countries and the wider Middle East and North Africa region.

Al Sabah received a BA in English literature from Kuwait University and studied at Indiana University in Bloomington, Ind.

Frances Arnold is the Dickinson Professor of Chemical Engineering, Biochemistry, and Bioengineering at the California Institute of Technology, where her work focuses on protein engineering, with applications in energy, chemicals, and medicine.

Arnold’s work has been recognized with the Raymond and Beverly Sackler Prize in Convergence Research (2017), the Millennium Technology Prize (2016), the Eni Prize in Renewable and Nonconventional Energy (2013), and the Charles Stark Draper Prize (2011). She was awarded the National Medal of Technology and Innovation in 2011 and was inducted into the National Inventors Hall of Fame in 2014.

She is an elected member of the National Academies of Science, Medicine, and Engineering and the American Academy of Arts and Sciences. She has honorary doctorates from Stockholm University, the ETH Zurich, and the University of Chicago, chairs the advisory panel of the David and Lucile Packard Foundation Fellowships in Science and Engineering Program, and serves as a judge for the Queen Elizabeth Prize in Engineering.

Arnold will speak at Thayer School of Engineering’s investiture, where she will receive the school’s highest honor, the Robert Fletcher Award, given annually in recognition of distinguished engineering achievement and service in the highest tradition of the school. This year, Thayer is celebrating the 150th anniversary of its founding.

Abbey D’Agostino ’14, winner of seven NCAA championships as a Dartmouth runner, was recognized by President Obama in 2016 as a model of “what the Olympic spirit and the American spirit should be all about” for helping a competitor over the finish line after the two collided midway through the 5000-meter qualifying race at the Rio games.

D’Agostino, a psychology major, is the most decorated Ivy League athlete in both track and field and cross-country running and the first Dartmouth female distance runner to win an NCAA title.

Off the track, she was an active member of the Fellowship of Christian Athletes and of Integrare Christian Fellowship, a bible study group based at the Tucker Foundation. Following graduation she signed with New Balance Athletics Inc. to run professionally.

D’Agostino received international media attention during the 2016 Olympics in Rio de Janeiro after she and New Zealander Nikki Hamblin helped each other get up and finish their race after a hard collision. The two women finished the 5000-meter qualifier and advanced to the final, but a knee injury sustained in the fall forced D’Agostino to end her 2016 Olympic bid. Both athletes were awarded the Rio 2016 Fair Play Award by the International Fair Play Committee.

Humanitarians Robert “Bob” King and Dorothy “Dottie” King are the cofounders of King Philanthropies, a foundation that supports efforts to alleviate global poverty. The Kings’ philanthropic initiatives include the King Scholars Leadership Program at Dartmouth, the Stanford Institute for Innovation in Developing Economies, the Thrive Foundation for Youth, and a new initiative in Myanmar that focuses on food, nutrition, and rural livelihoods.

The King Scholars program, launched at Dartmouth in 2012, will graduate its first two students this year. The program is built on the premise that poverty alleviation can best be achieved by those who have experienced it. Students in the program receive a world-class college education and leadership training to prepare them to employ game-changing ways to alleviate poverty.

Bob King received his bachelor’s degree in economics from Dartmouth in 1957 and a master of business administration degree from the Stanford Graduate School of Business in 1960. He is the founder of R. Eliot King & Associates, an investment management company, and of Peninsula Capital, and remains an active international venture investor.

Dottie King majored in child development at the University of Wisconsin, Madison. Along with raising three children, she and her husband were partners in launching R. Eliot King & Associates. Her volunteer work has included service with organizations such as the Parent Teacher Association, Girl Scouts of the USA, the Lucile Packard Children’s Hospital Stanford, and the Bechtel International Center at Stanford.

Sinegal began his career in retail business in 1954. As an 18-year-old college student, he went to work for the legendary retail icon Sol Price at FedMart, Price’s discount store in San Diego. Sinegal remained working for Price for almost 30 years before striking out on his own to start Costco with his business partner, Jeff Brotman.

Costco today has revenues of more than $113 billion and operates 723 warehouses/stores in 44 states, Puerto Rico, and 10 countries. The company employs over 200,000 people worldwide and has earned a reputation as a fair and progressive employer.

Sinegal serves as a trustee of the Fred Hutchinson Cancer Research Center. He is a senior executive in residence at Seattle University’s Albers School and serves in a similar capacity at his alma mater, San Diego State University. He also serves as an adviser at the Mendoza School of Business at Notre Dame.

Anna Deavere Smith is an actress, playwright, and teacher who is known for creating a new form of theater. She is also a professor at New York University.

Looking at current events from multiple points of view, Smith’s theater combines the journalistic technique of interviewing her subjects with the art of interpreting their words through performance. Her current play, Notes From the Field, explores issues of education, inequality, and incarceration.

Smith’s earlier works, the critically acclaimed Fires in the Mirror and Twilight: Los Angeles, 1992, secured her reputation as an innovative and powerful voice in contemporary theater.

Her awards include a MacArthur Fellowship, two Tony nominations, the Dorothy and Lillian Gish Prize, the Modern Language Association’s Phyllis Franklin Award for Public Advocacy in the Humanities, the Ridenhour Courage Prize, and the George Polk Career Award in Journalism. She was awarded the National Endowment for the Humanities Medal by President Obama.

She currently appears on ABC’s hit series Black-ish. She played Gloria Akalitus on Showtime’s Nurse Jackie and the national security adviser on The West Wing. Her films include The American President, Rachel Getting Married, Philadelphia, Dave, Rent, and The Human Stain.

Jake Tapper ’91 is chief Washington correspondent and news anchor for CNN. As the host of the network’s weekday news program, The Lead with Jake Tapper, as well as the Sunday morning show, State of the Union, Tapper has earned a reputation as a skilled and tenacious questioner of key newsmakers.

During the 2016 presidential election cycle, Tapper moderated two of the GOP primary debates and one Democratic town hall and conducted extensive interviews with the Republican and Democratic candidates. Since the inauguration of President Donald Trump, Tapper has broken a series of stories in interviews with White House officials.

He is the author of the New York Times bestseller The Outpost: An Untold Story of American Valor, a history of an isolated outpost in Afghanistan, and has published the acclaimed books Down and Dirty: The Plot to Steal the Presidency, about the aftermath of the 2000 election, and Body Slam: The Jesse Ventura Story, about the limelight-loving pro wrestler who became the governor of Minnesota.

At Dartmouth, Tapper majored in history modified by visual studies, an unusual combination that the history department approved in support of his interest in politics and political cartooning.

Von Reyn worked on HIV in Africa as a consultant for the Special Program on AIDS of the World Health Organization before founding the infectious disease and international health section at Geisel. He has been an NIH-funded investigator on tuberculosis and HIV for more than 20 years, including with the DarDar trial in Tanzania, the first successful trial of a new TB vaccine. He has been principal investigator of the Dartmouth NIH Fogarty Training Grant with Tanzania since 2003.

Von Reyn has published more than 100 manuscripts on HIV and TB, has twice received the Geisel Clinical Faculty Teaching Award, and has received a lifetime achievement award from the International Union Against Tuberculosis. He is leading development of the Dartmouth TB vaccine, DAR-901, which is currently being tested in a Phase 2 clinical trial among adolescents in Tanzania.

A variety of events will take place before commencement, including class day and investiture ceremonies for Dartmouth’s three professional schools, and baccalaureate, a multifaith service open to all graduates and their guests.