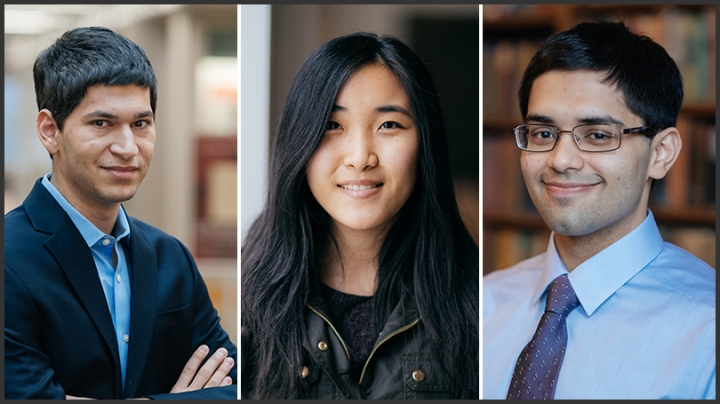 The undergraduates are among 240 sophomores and juniors nationwide chosen to receive the honor. It is only the second time since 2000 that three Dartmouth students have been selected for the annual Goldwater prize, which supports undergraduates who intend to pursue careers in mathematics, engineering, and the sciences.

“The Goldwater is the premier award for undergraduates in the sciences, intended to support students who will become the next generation of research talent in the United States,” says Jessica Smolin, assistant dean for scholarship advising.

“That three of our students were awarded Goldwater Scholarships in a single year is a testament to the outstanding contributions they have already made to the sciences, and to it speaks to the caliber of students in the sciences at Dartmouth,” Smolin says. “It also recognizes the outstanding mentorship and support our faculty provides by giving students access to cutting edge research opportunities.”

The Goldwater Scholarship, established by Congress 1986 in honor of the late Sen. Barry Goldwater of Arizona, provide funding to cover the cost of tuition, fees, books, and room and board up to a maximum of $7,500 per year for each student. This year’s winners were selected from a field of 1,286 students from 2,000 American colleges and universities.

Kang says last week brought two exciting milestones on the road to his professional goals of earning both an MD and a PhD in biomedical engineering. He received notification of his Goldwater Scholarship and the next day earned that he has been accepted in the early assurance program at Geisel School of Medicine for the fall of 2018.

He credits the broad range of opportunities at Dartmouth for this success. His experience at the College includes working as a research assistant analyzing data on electromagnetic emissions from the Northern Lights under the tutelage of James LaBelle, chair of the physics and astronomy department, and assisting P. Jack Hoopes, professor of surgery at Geisel, on a project titled “Treating malignant melanoma with viral immunotherapy.” Kang’s work with Hoopes was as part of the College’s Presidential Scholars program.

In addition, Kang and two students working at Thayer School of Engineering developed “A Happier Lamp,” a device designed to treat seasonal affective disorder in college students. The prototype, which has a pending application for a patent, won third place in The Pitch, the Dartmouth entrepreneurial competition sponsored by the DALI Lab and The DEN, the Dartmouth Entrepreneurial Network.

Kang is aiming for a career in biomedical research in the area of tissue engineering, a field in which researchers seek to develop methods to grow human tissue and organs for transplant. Inspired by his biology Professor G. Eric Schaller, his biochemistry professor, he wants to teach.

“I really like the way he challenges students with questions. So that’s something that I try to do,” Kang says.

Li, who is majoring in physics modified by biology, thought she was headed for medical school, but her work with Allen Gulledge, an associate professor of molecular and systems biology at Geisel, sent her in a new direction.

Gulledge is doing research on the interaction of two specific neural receptors in the brain. In Gulledge’s lab, Li is using advanced computational physics to model the way these receptors respond to different inputs, essentially running a computer simulation to better understand the neural mechanics.

“In Gulledge’s lab, I realized that I really like research, and I think going into academia would be ideal for me,” she says.

“The way Allan works is, we’ll start on a question, then I come up with some data, and then he gives me 10 more questions,” Li says,  “It makes me see in a very direct way that there are so many other questions to ask.”

Li envisions using computational physics to understand which pathways within the network of billions of neurons in the brain produce specific actions such as a movement or emotion. This research could potentially contribute to the development of artificial intelligence, she says.

“I think as computational power and methods get better, we’ll be able to head toward really understanding what goes on inside different brains,” Li says.

Lichtman’s studies are in the realm of pure math. The math major aims is to get his PhD and continue to explore big questions about whole numbers.

“From outside, the question on its face looks obtuse. It takes a while to build up a working knowledge of the machinery of numbers theory before you can appreciate it, but it is very rewarding if you want to invest the time,” Lichtman says.

He has been working with his mentor, Professor of Mathematics Emeritus Carl Pomerance, on how mathematicians determine whether a large number containing, for example, 300 digits, is a prime number. They examined one method, known as the “Fermat primality test,” and concluded that the method incorrectly identifies a number consisting of 300 digits as prime only 1.7 times in a number of attempts represented by 10 followed by 29 zeros.

“He’s an emeritus professor, so all his time working with me has been voluntary. He’s extremely passionate about what he's doing,” Lichtman says. “Having the chance to work with him, to take advanced courses, and the access to the amazing facilities and opportunities at Dartmouth have made my development as a mathematician seem like a natural progression.”

For information about applying for the Goldwater Scholarship and other national and international scholarship programs, visit Dartmouth’s National Scholarships/Fellowships website.