‘All That Nonsense,’  by Visiting Professor Ezzedine Fishere, is a best-seller in Egypt. 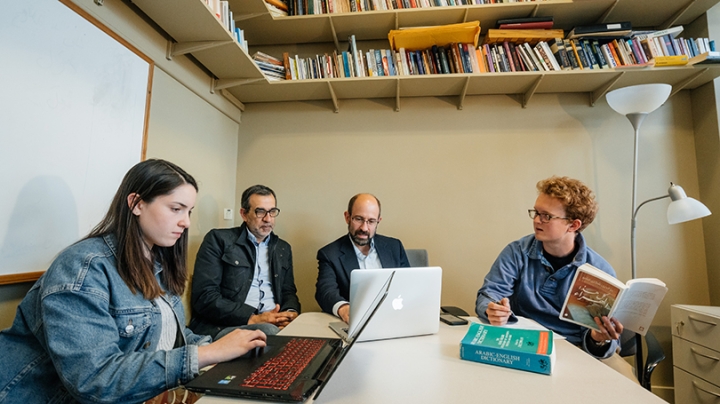 If you want to read Kol Haza Elhora’a (All That Nonsense), the latest novel by Visiting Professor of Middle Eastern Languages and Literatures Ezzedine Choukri Fishere, you’ll need to master Arabic, because the English translation is not yet available. Charlotte Kamin ’18 and Joseph Mears ’18 are ahead of that curve. As James O. Freedman Presidential Scholars, a program that offers juniors the chance to serve as research assistants to faculty members, Kamin and Mears have read the original Arabic text and are now working on the English translation with Jonathan Smolin, an associate professor of Arabic and chair of the Department of Asian and Middle Eastern Languages and Literatures.

“Working on this book is one of the most exciting things we could be doing with Arabic right now,” says Kamin during a meeting with Smolin and Mears.  “It’s one of Egypt’s best-selling novels.”

Similar to Arabian Nights, All That Nonsense nests stories within stories. Fishere’s modern Scheherazade is a young 20-something Egyptian man, Omar Fakhredine, who meets his Egyptian-American lover, Amal Mufeed, at a party. It’s Amal’s farewell bash—she’s about to return to America after being imprisoned in Egypt, charged with espionage. After a night of drinking, she goes to bed with Omar. Over 48 hours, they exchange stories about the year she spent in jail, giving the reader a window on how Egyptian activists have been affected by post-revolution politics since the 2011 uprising. Omar paints a gloomy picture of disillusioned rebels. Amal is not quite ready to give up hope.

“This is the story of a generation,” says Fishere. “They are all stuck, all in prison, either inside or outside. They are all looking for a way out and they are all disconnected from all that nonsense that Egypt is today: the regime, the discourse, the official stories, the mentality governing the country, ideas of society. All of this culture for them is alien. It belongs to their parents, not them, and they are being squeezed, so you can see this in the stories he tells her.”

Fishere has had a front row seat on Egyptian unrest through his career in the foreign service. From 2001-2004, he was senior political adviser to several United Nations missions in the Middle East. He then served for two years as policy adviser to the Egyptian foreign minister. The Egyptian transitional government appointed him as secretary-general of the Supreme Council for culture in 2011, a post he resigned. Fishere taught at the American University in Cairo before becoming a visiting professor at Dartmouth, offering courses in Arab culture, society, and literature. All That Nonsense is his eighth novel and perhaps, he says, his darkest.

“Egypt is under the rubble,” says Fishere. “But it’s not dead. It will re-emerge and survive.”

As they translate parts of his new novel, Fishere hopes Kamin and Mears will learn not just about the intricacy of the Arabic language, but also about Egyptian culture. “Language is a carrier of culture,” he says, “and that’s nowhere more evident than when you translate.”

Kamin and Mears say it’s been eye-opening, reading a novel about young people struggling for freedoms many American college students take for granted. In the passage Smolin has given them to translate, Omar tells Amal about two gay friends who defy social norms by coming out on Facebook. Family and friends are outraged. The two men get arrested, but manage to escape to New York.

“This passage reveals a kind of social problem that is not just about the tyranny of the state itself. It’s also about the social fabric of the country, about politics and sociopolitical issues,” says Kamin, who learned Arabic at Dartmouth after studying Hebrew in high school. “I think knowing both languages is the best way to understand the region, and become familiar with people and politics,” she says. She’s considering a career as a translator.

She and Mears are making key decisions about grammar and vocabulary in Fishere’s novel. “For example,” Smolin asks them, “Should we use past or present tense for the events that Omar retells to Amal?”

Mears says this project has reached a turning point, as the three confer not just about meaning, but about style and tone.

“In the next few weeks we will learn a lot,” he says, “as we move from literal to more nuanced translation. It will be very interesting to see the choices Charlotte and I make and how they differ from Professor Smolin’s. I know we will come away from this with a deep understanding of the translation process.”

Kamin reads aloud from the sample passage of All That Nonsense—in Arabic—before showing Smolin her English version. “I’m interested in how true you have to stay to the text and how much agency you have to adapt to a different readership,” she says. “But I also know now that there are always things a translation can’t convey, because languages are fundamentally different from each other.”

For Smolin, a goal of this project is to educate the students about how to land a professional translation job.

“How do you craft the proposal, the cover letter, the synopsis?” he asks them. “This sample is supposed to persuade a publisher to publish my translation. You guys live in a world where a professor has to read your paper, but in the publishing world someone has to pay to read this book, and that’s a totally different calculus from what you are used to.” Smolin says the English-language publication of All That Nonsense is still being negotiated. The publisher has asked him to translate one of Fishere’s earlier novels, Bab al-Khoroug, which views the January 25, 2011 uprising in Egypt’s Tahrir Square—ironically,  through the eyes of a fictional translator.