‘Cabaret’ Cast Gets an Expert’s View of 1930s Berlin 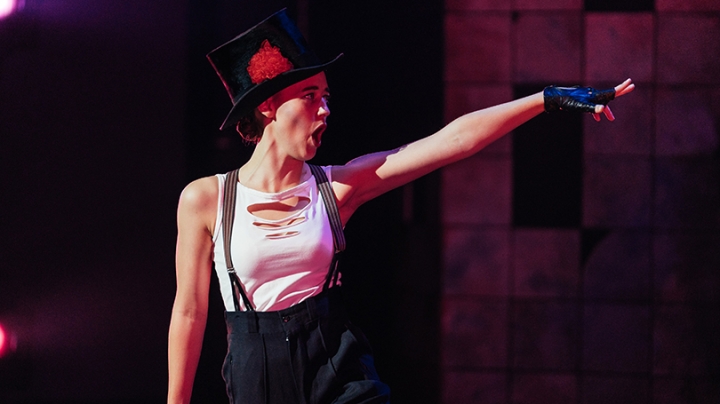 What happens when an expert on the Weimar Republic—Germany’s brief experiment with democracy between two world wars—meets the cast of Cabaret?

That’s what Associate Professor of German Studies Veronika Fuechtner wanted to know when she learned that the theater department was staging the musical, set in early 1930s Berlin, this term.

Fuechtner is the author of Berlin Psychoanalytic: Psychoanalysis and Culture in Weimar Republic Germany and Beyond and many scholarly articles about the time—and she teaches Cabaret in some of her classes. So the production’s director, Carol Dunne, and Associate Professor Laura Edmondson, chairs of the theater department, were intrigued when Fuechtner approached them.

Edmondson arranged for Fuechtner to give a public pre-show talk about sexual politics in Berlin during the Weimar Republic on the second night of the show’s run, Nov. 4, at 7 p.m. at the Top of the Hop in the Hopkins Center for the Arts. The show opens Friday, Nov. 3.

“But I was lamenting the fact that the cast wouldn’t be able to participate,” Edmondson says. “In the theater department, we encourage performers to think critically and contextually about the creative work that they’re doing. It was Carol who had the idea of, what if we invite her to dinner?”

So, before a recent rehearsal, over a buffet of pad thai and curry, Fuechtner met with the cast and crew.

Fuechtner began with a bit of background, describing Weimar Berlin as a place of exploration, from radical political factions to a nascent gay and transgender rights movement, all in the context of postwar trauma, massive inflation, and social upheaval.

“We have this incredible space of possibility in that time, and there’s so much happening in terms of artistic experimentation, political experimentation, radical movements—but also movements of the self,” she said. All that coexisted with increasing anti-Semitism and violent political polarization, with “street fights between communists and fascists and all kinds of groups. It’s very fractured.”

She described how Chris Isherwood, the British-American whose autobiographical novel forms the basis of one of Cabaret’s protagonists, Clifford Bradshaw, was deeply immersed in Berlin’s relatively sexually liberated avant-garde community, living for a time in a house owned by the Institute for Sexual Science (Institut für Sexualwissenschaft) and frequenting cabarets and pick-up spots.

The students asked questions ranging from how Afro-Germans participated in Berlin society and were viewed by ethnic-German Berliners to the class differences between assimilated German Jews and more traditional Jews from Eastern Europe to the prevalence of sexually transmitted diseases in the cabaret scene.

Student actors at the dress rehearsal for Cabaret. (Photo by Eli Burakian ’00)

Computer science and theater major Zach Gottschall ’20, who plays Bradshaw, said Fuechtner’s talk gave him insight into his character. “Berlin was just unbelievable in many ways—people were exploring their sexuality and politics and these ideas in ways that are kind of hard to imagine in today’s world. And Cliff is an outsider in this world. I found it very interesting and helpful.”

Rachel Beck ’19, a geography major minoring in film and theater who plays a Kit Kat girl— a performer in the musical’s cabaret club—was surprised at how frankly sexuality was treated in some circles of Weimar Germany. “I didn’t realize how much focus was on human sexuality at the time,” she said. “I didn’t really realize that things that are relevant today could also be relevant back then.”

Ryan Specter ’19, a double major in government and French modified with economics, plays Ernst Ludwig, a Nazi who befriends Bradshaw. He asked Fuechtner to discuss how a fascist like Ludwig would have viewed Americans like Bradshaw.

“Anti-Americanism was very, very strong,” Fuechtner said, because of the U.S. role in World War I. “The U.S. was one of the powers that were, in the Nazi view, responsible for the poverty of Germany in the 1920s.” The Nazis also disapproved of American culture, from jazz music to racial diversity, she said.

Casey Hunter ’19, a history major who plays one of the Kit Kat girls, asked if Fuechtner thought a cataclysm like the Holocaust could happen again.

Fuechtner did not say yes or no, but observed that a number of “singular factors came together” in the 1920s and ’30s to create fascist movements in Germany and elsewhere. The persecution of Jews and other groups at the time was supported by “a large part of the German population,” she said, and that persecution became normalized in German society. “A lot of people benefited from that persecution and murder. They didn’t think about what the cost was.”

Following that night’s rehearsal, Dunne described the impact of the cast’s discussion with Fuechtner as “palpable.”

“We did a run-through of the show right after, and it was revelatory. It anchored all of the scenes in which their characters are watching scenes happening. It really helped them focus on what’s outside and bring it in. It was a completely different cast,” Dunne said.

“Being part of an academic institution challenges us to make our art smarter, more historically connected, and more powerful as a tool to change the future. We’re going to put all of the perspective she gave us into the play, and hopefully audience members will come away with a deeper understanding of what happened and what might be happening now.”