In the Family: Mario Puzo’s Papers Come to Dartmouth

The Godfather author’s papers are a gift from Diana and Bruce Rauner ’78. 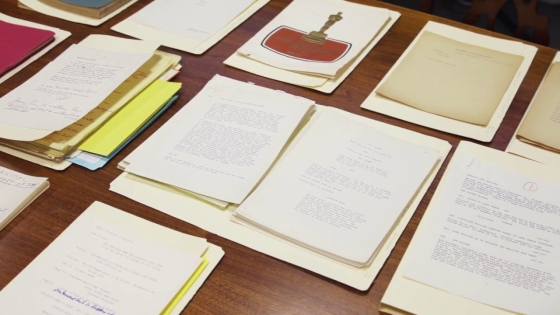 It was, ahem, an offer they couldn’t refuse.

When Diana and Bruce Rauner ’78 offered their collection of The Godfather author Mario Puzo’s papers to Dartmouth Library, the answer was an emphatic yes.

The papers, which will be housed at Rauner Special Collections Library (named by a gift from the Rauners that created a permanent home for Dartmouth’s special collections), include draft manuscripts, correspondence, and other records from Puzo’s long career as a novelist and screenwriter—even the 1965 Olympia typewriter on which he likely wrote The Godfather.

Selections from the papers will be on display from April 5 to June 30 in the Berry Main Street lobby of Baker-Berry Library. And in celebration of the gift, the Hopkins Center for the Arts will be screening The Godfather at 4 p.m. Saturday, May 12, in Loew Auditorium at the Black Family Visual Arts Center, introduced by Graziella Parati, the Paul D. Paganucci Professor of Italian Literature and Language and director of the Leslie Center for the Humanities. Tickets for the film are $8/$5 with a Dartmouth ID. 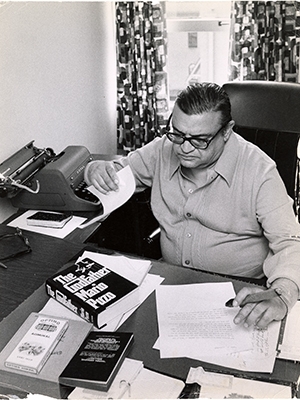 Puzo at work in his office on the Paramount Lot, 1969. (Photo by Bob Peterson courtesy of Dartmouth Library)

‘What Have I Done to Deserve Such Generosity?’ (Vito Corleone, The Godfather)

Head of Special Collections Jay Satterfield calls the collection “an incredibly generous gift that opens up a lot of avenues for research for a lot of people.”

“Acquiring the Mario Puzo papers is a coup for Dartmouth that will generate many different research projects among students, faculty, and visiting scholars,” says film historian Mark Williams, an associate professor of film and media studies. “The collection is especially rich in its details of an acclaimed working writer’s career path. The centerpiece is the many materials related to the source novel and motion picture iterations of The Godfather, the enormous success of which both enabled and frustrated Puzo in many telling ways across decades of creative endeavors.” 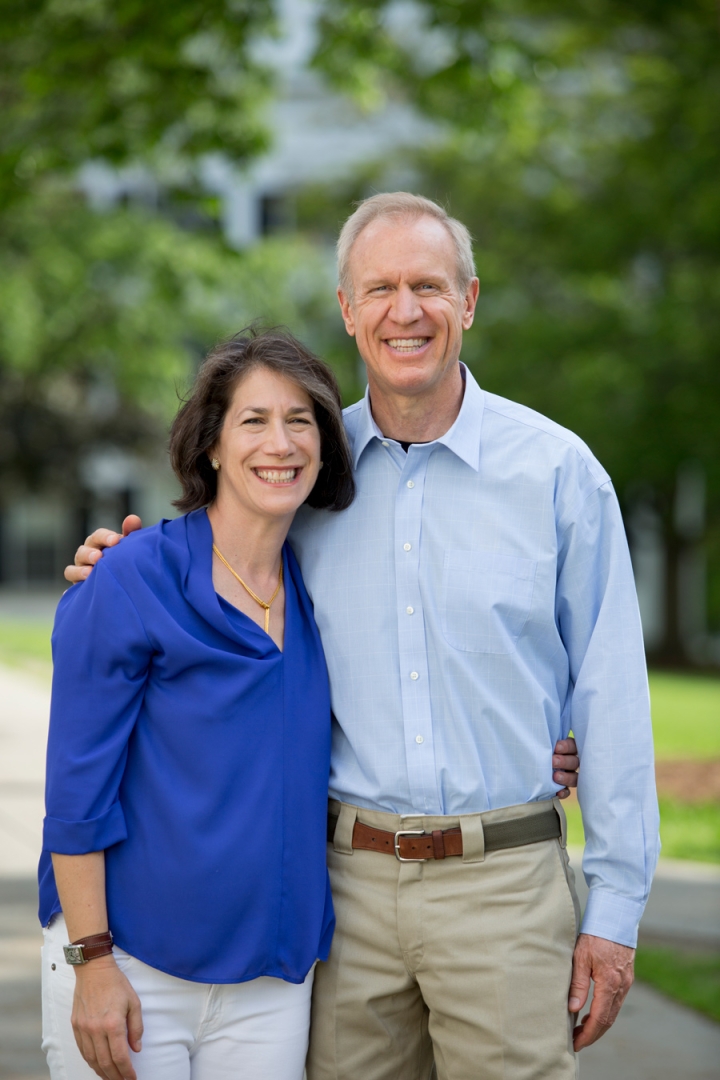 For their part, the Rauners see Dartmouth as the perfect home for the collection.

“We are thrilled to place the Puzo collection at Dartmouth, where it will be available to the worldwide scholarly community and integrated into the curriculum to create immediate and lasting benefits for students,” says Diana Rauner.

“We love the fact that Puzo’s papers document the creation of Dartmouth’s most famous fictional alumnus, Michael Corleone, and that they will live for centuries to come with the papers of so many prominent, and real, alumni!” says Bruce Rauner, who is the governor of Illinois.

Indeed, Godfather protagonist and Mafia boss Michael Corleone is portrayed in the book and films as a Dartmouth graduate, and Hanover and Dartmouth appear in many of Puzo’s writings—a puzzling detail, considering Puzo himself was not an alumnus.

Exhibit curator Hazel-Dawn Dumpert found a clue in The Fortunate Pilgrim, Puzo’s fictionalized memoir. “One of the characters gets sent to live in New Hampshire via the Fresh Air Fund”—a nonprofit that helps New York City children spend summer vacations in the country. “I thought, I bet he was a Fresh Air Fund kid.”

Dumpert was able to confirm that Puzo—the son of Italian immigrants who grew up in the Hell’s Kitchen neighborhood of New York City in the 1920s—did, in fact, spend summers in New Hampshire through the Fresh Air Fund. Although she hasn’t pinpointed exactly where he stayed, Hanover seems a plausible guess.

“I’m dying to know who his host family was. My guess is that there might still be some people who at least knew the family,” Dumpert says.

Together, the papers are a detailed record of the professional life of a working writer, documenting how Puzo made a calculated shift late in his career from serious literary novelist to founder of a pop-culture phenomenon.

“He was almost 50 when The Godfather was published, and he had had a long career as a writer before then,” Dumpert says—literary novels, pulp fiction published under a pseudonym, even a children’s book called The Runaway Summer of Davie Shaw, which Dumpert calls “funny and sweet, and still completely Puzo.”

Though Puzo’s early work received good reviews, he didn’t make much money. “In his mid to late 40s, he owed tens of thousands of dollars to family members, to tax collectors, and, because he was an inveterate gambler, to bookmakers,” Dumpert says.

Cash-strapped, Puzo consciously set out to write a bestseller. “Documents in the collection show him literally plotting out the sex scenes through the novel for maximum effect,” says Satterfield, of outlines for what became The Godfather.

But for Puzo, the downside of financial success was that he never was taken seriously as a literary writer again. “He even says in an essay published after The Godfather, ‘I’m no longer a novelist—I’m a junior partner in The Godfather business,’” says Dumpert.

‘I Work My Whole Life’ (Vito Corleone, The Godfather)

While the exhibit is on view this spring, Rauner archivist Elena Cordova will finish preparing the full collection for research use. Her work involves surveying, cataloging, and organizing every document in the collection. “The collection is comprised of somewhere around 50 Bankers Boxes, so that’s a lot of material if you imagine how many pieces of paper it takes to fill up one of those boxes,” Cordova says.

“You never know what you’re going to find, but this collection is in great shape and in good order,” she says. She identifies each document and determines if it’s in good enough condition be handled by researchers, or if it needs intervention from the library’s preservation department. 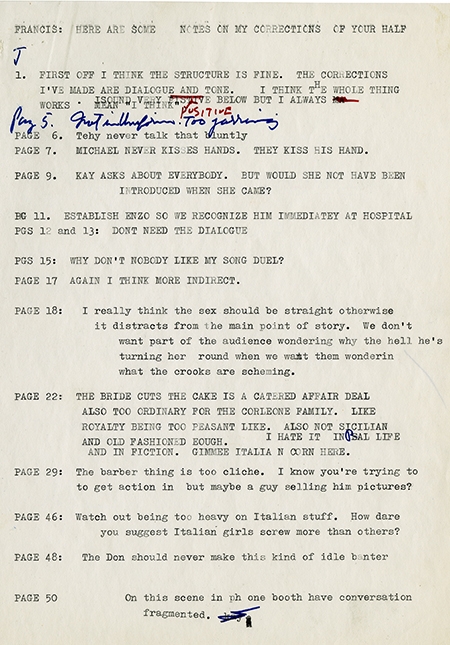 Cordova keeps a record of what she finds, highlighting documents of particular interest—including notes between Puzo and Godfather director Francis Ford Coppola and Puzo’s program from the Academy Awards ceremony at which The Godfather won best picture. “That he kept it indicates the importance of that in his life,” she says.

Finally, she will create a detailed finding aid that will be accessible on the library’s website.

Cordova says she’s been surprised to discover Puzo’s ironic sense of humor. “When you’re working by yourself with a collection, to have the papers of someone with a strong wit can make the work really fun and engaging,” she says.

“I have come to have a great affection for Puzo as a person and a lot more respect for Puzo as a writer,” Dumpert says. “Even in some of the more mercenary works, there is still an incredible talent for character and narrative drive. As a writer myself, I really appreciate that about him. I’ve learned a lot from him.” 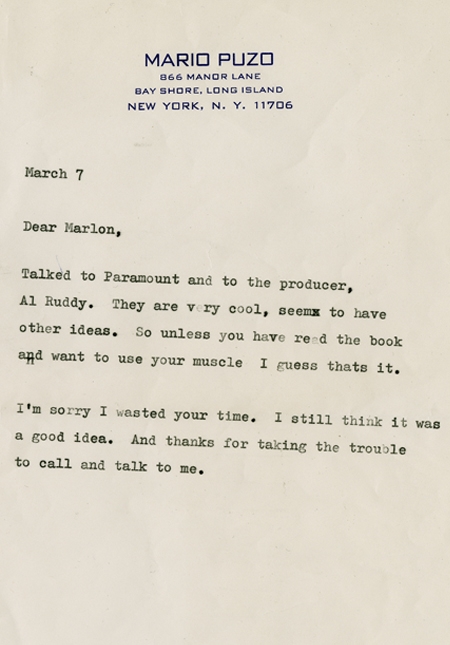 Letter, Mario Puzo to Marlon Brando. Puzo wanted Marlon Brando for the role of Vito Corleone. Brando warned that he was persona non grata in Hollywood, and that a director would have to fight for him—as Coppola did. (Photo courtesy of Dartmouth Library)

Satterfield says the Puzo papers are a good fit for the library, which owns several film history collections, including the papers of screenwriter John Hess ’39; a collection of 2,200 Hollywood scripts from the 1920s, ’30s, and ’40s, which producer Walter Wanger, Class of 1915, arranged to be collected at Dartmouth; and the papers of On the Waterfront screenwriter Budd Schulberg ’36.

“On the Waterfront was Marlon Brando’s first major film role where he won an Oscar, and now we have The Godfather material, which is Marlon Brando winning another Oscar for another iconic role. That’s kind of cool,” says Satterfield.