Dartmouth hosts an international gathering on high-powered math this month. 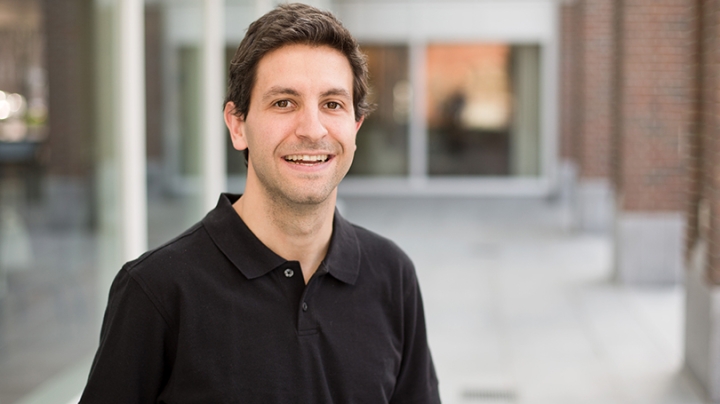 Associate Professor Sergi Elizalde is the chair of the organizing committee for an international mathematics conference coming to Dartmouth. (Photo by Rob Strong ’04)
7/11/2018
Body

More than 220 mathematicians from 25 different countries are coming to Dartmouth for a week-long conference beginning on July 16.

“Everybody who works in combinatorics anywhere in the world knows about this conference,” says Sergi Elizalde, an associate professor in the Department of Mathematics and chair of the organizing committee for the conference, the 30th International Conference on Formal Power Series and Algebraic Combinatorics (FPSAC). Other members of the committee include Professor Rosa Orellana; Peter Winkler, the William Morrill Professor of Mathematics and Computer Science; and Jay Pantone, the John Wesley Young Research Instructor.

President Phil Hanlon ’77, whose research is focused on probability and combinatorics, will open the conference with remarks at 8:30 a.m. on Monday.

“Combinatorics is a lot like solving puzzles,” Elizalde says. “It is a discipline that deals with finite things you can count, construct, or optimize. It can be used to solve algebraic problems, and sometimes algebra can help solve problems in combinatorics. The conference covers combinatorics in general, but the emphasis is on algebraic combinatorics.”

Combinatorics, Elizalde says, has applications in biology, where it facilitates DNA sequence alignment and refines evolutionary trees. It also has applications in computer science, analyzing algorithms, and in areas of physics, including condensed matter theory and quantum physics.

The conference will feature 30 half-hour presentations on applications and theories, 70 posters presenting research information, and ten plenary sessions that are typically less specialized and more accessible to members the general public, who are welcome to attend. All the talks will take place in Alumni Hall.

“This is a big deal for graduate students who work in combinatorics. It’s an opportunity to show their work and discuss their research with leading mathematicians,” says Elizalde. “Two Dartmouth mathematics graduates, who received their PhDs this year, are FPSAC participants. Justin Troyka, Guarini ’18, is presenting a poster at this year’s conference, and last year in London, Katherine Moore, Guarini ’18, presented a poster.”

“I am most excited about the fact that all the attendees from around the world will be at Dartmouth for a week,” says Elizalde. “It’s like organizing a big party for math. I have been going to FPSAC for the last 15 years, because you learn so much. Each talk is eye opening. If you are working in the area, you learn about the most recent developments and get ideas and motivation for your own research.”

The conference is supported by a gift from Fannie and Alan Leslie ’30, for whom the Leslie Center for the Humanities is named, and by the National Science Foundation.