With the coveted award, the alumnus heads to Stanford. 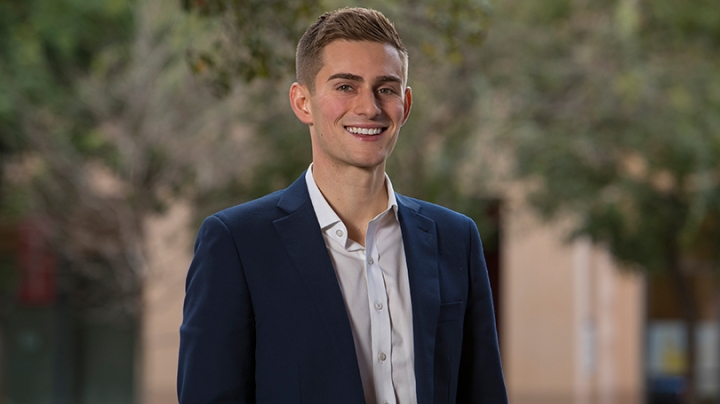 Among other accomplishments, Rex Woodbury ’15 broke the world record for the fastest half-marathon run while wearing a suit and tie. (Photo courtesy of Dartmouth Alumni)
3/04/2019
Body

Rex Woodbury ’15 has a notable track record, so to speak: He competed in cross country at Dartmouth, has finished several marathons, and even broke the world record for the fastest half-marathon run while wearing a suit and tie. So, it’s fitting that Woodbury was in the middle of a run when he got a life-changing phone call last week.

On the other end of the line was John Hennessy, president emeritus of Stanford University. Hennessy was joined by Derrick Bolton and Jeff Wachtel, dean of admissions and executive director, respectively, of the world’s largest fully endowed scholarship program: Stanford’s Knight-Hennessy Scholars. The trio informed Woodbury of his acceptance into the program’s 2019 cohort. “I was thrilled and speechless,” Woodbury says.

The Arizona native joins a group of nearly 70 students from 20 countries who will receive full funding for graduate studies among all seven of Stanford’s schools. In 2019, the program accepted a mere 1.5 percent of applicants; criteria were based primarily on independence of thought, purposeful leadership, and a civic mindset.