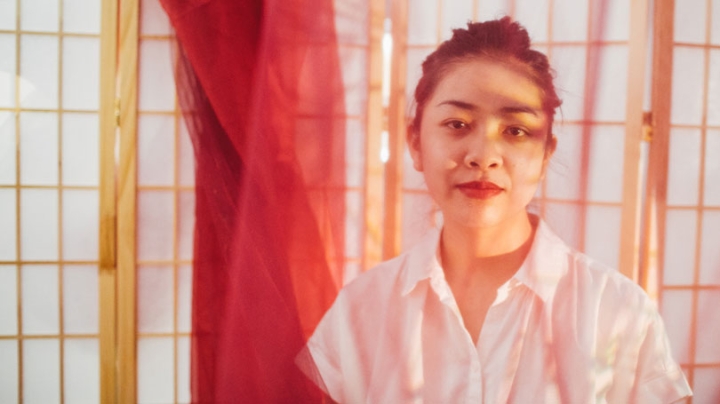 For her senior fellowship, Clara Chin ’19 has assembled words, animated film, fabrics, bits of fur, a bed, boxes of books, Japanese screens, and a bowl of tiny keys. You can find them all and more this week at the Hop Garage in Chin’s art installation about Freud’s most famous patient, “Dora,” a pseudonym for 18-year-old Ida Bauer.

The mise en scène is meant to suggest the room in which Freud treated Dora for what was then known as “hysteria.” But it’s not a realistic stage set. Instead, Chin creates a kind of dreamscape—the examining room as Dora herself might have unconsciously experienced it. The room is a 3-D illustration of sorts for Chin’s written thesis, which places “Dora” in a historical context of other women, including film stars, considered to be “hysterical.”

“What fascinated me was the way people reacted so strongly to Dora in the class,” says Chin. “Some were like, oh, this case is sexist, and Freud was so sexist—obviously he was—but the case did open up conversations about sexual stigma and social stigma.”

In his 1905 work Fragments of an Analysis of a Case of Hysteria, Freud initially concludes that Dora repressed her desire for “Herr K,” her father’s friend, who was accused of making advances to her. After about 11 months, Dora abruptly ended treatment, after which Freud admitted that the case was a failure, in part because, he belatedly decided, Dora was also hiding feelings for Herr K’s wife.

Chin’s monograph uses the Freudian case study as a springboard for theorizing about feminine desire in works of art and literature. “I hope to invert Freud’s diagnosis of hysteria and explore what extreme desire might reveal about modernity,” says Chin. “I want to reclaim hysteria by taking it out of the language of analysis and using instead the language of aesthetics and performance.”

Her installation expands upon key concepts in the written thesis, but in a way that transcends words, Chin says. “It contains what a modern-day Dora reads, the music she hears, and the films she watches. I see Dora’s hysteria not as a problem but as an aesthetic, a way of reclaiming desire. When we distance ourselves from desire, things go wrong, physically and emotionally.” 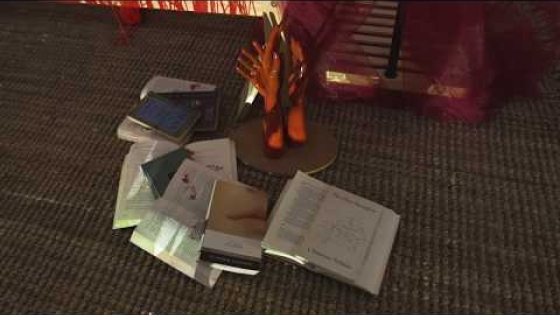 Remote video URL
In the video above, Chin explains elements of the installation.

“Clara has such an active, associative mind,” says Associate Professor of English Aden Evens, her senior fellowship adviser. “She is really interested in putting big ideas together with other big ideas. That synthetic approach is too rare in the academy generally, and certainly many undergraduates can be overwhelmed by the amount of knowledge that one has to acquire before one can make an original contribution. But that never stopped Clara. She was always an expansive thinker, even as a sophomore.”

Senior fellowships, established in 1929 by President Ernest Hopkins and supported at Dartmouth by the Kaminsky Family Fund, offer extra time and reduced tuition to pursue projects beyond the scope of curricular courses. Fellows are not required to enroll in classes during their senior year, nor are they required to complete a major.

“Dora’s Room: Digital Dreams” is open to the public in the Hop Garage from 1 to 6 p.m., April 1 through 7. Today, at 6 p.m. in the Hop Garage, there’s a roundtable discussion about masculinity. At 1 p.m. Saturday, April 6, there will be another roundtable, “Implemented Feminism.” On Sunday, Chin will give a reading from her work, also at the Hop Garage.