A “Foodways” conference will combine panel discussions and locally-sourced meals. 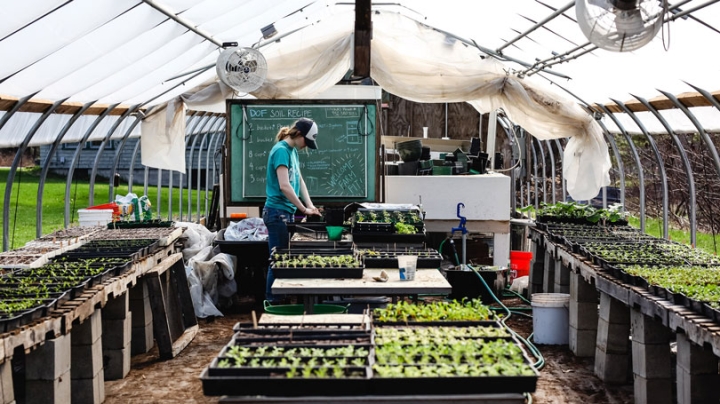 A May 21-22 food sovereignty conference organized by Native Americans at Dartmouth will include workshops and meals at the Dartmouth Organic Farm. (Photo by Kevin Yang ’20)
5/13/2019
Body

There will be food for thought—and good things to eat—at next week’s conference exploring traditional Native American agriculture.

“Foodways in Indigenous Communities” will take place May 21-22 at several locations around campus, including Collis, the Hood Museum of Art, the Dartmouth Organic Farm, and the Native American House. Participants will not only talk about healthy, sustainable food—they’ll prepare and serve it, as well. All events are free and open to the public.

“All people have a right to culturally appropriate and healthy food—to define their own food and food waste systems and the economic, social, and cultural practices that relate to the production and consumption of food,” says Shelbi Fitzpatrick ’19, one of the organizers. “We’re bringing together students and faculty to connect themes of food sovereignty, indigenous ways of knowing, and the future of food and agriculture in Indian country.”

At 7 p.m. on May 20, the eve of the conference, in the Loew Auditorium at the Black Family Visual Arts Center, there will be a screening of Maize, a documentary about indigenous ways of growing corn, by Hopi filmmaker and artist Victor Masayesva.

Over the next two days, panel discussions and meals will center on how sustainable farming practices are setting positive examples in Native American communities locally and across the nation.

On May 21, following a late afternoon panel discussion about tribal food sovereignty initiatives, Sean Sherman, an Oglala Lakota and co-author of the award-winning cookbook, The Sioux Chef’s Indigenous Kitchen, will cater dinner and give one of two keynote talks. Valerie Segrest, a member of the Muckleshoot tribe and a native nutrition educator who specializes in local and traditional foods, will give the other.

“What’s really amazing is that Sherman will take a look around the Dartmouth Organic Farm and gather foods to make dishes for our dinner. He’ll talk about each one, and how he prepared it,” Fitzpatrick says.

On May 22, Art Hanchett, a member of the Abenaki tribe who works in Dartmouth’s finance division, will lead a hands-on workshop about local plants at the Dartmouth Organic Farm. Lunch will be served. Later that afternoon, at the Hood, participants will see and learn about artifacts indigenous peoples have traditionally used to practice food sovereignty.

The conference will end with a feast at the Native American House led by Liz Charlebois, an Abenaki basket maker and seed preserver from New Hampshire.

Fitzpatrick says her interest in foods that are locally raised or grown according to culturally appropriate norms dates back to her childhood on the Blackfeet Indian Reservation in northern Montana.

“My dad is a rancher, so I’ve grown up learning about and understanding food systems and specifically how they relate to indigenous people,” she says. “Through 4-H I learned to feed and take care of a steer, and when it was butchered, I received payment. From that experience, I was chosen to attend different kinds of food conferences, which led me to a group that advocates in Washington, D.C., for Indian farmers and ranchers. I‘ve taken some leadership roles, educating youth about how they can become more food sovereign in their communities.”

To plan the Foodways conference, Fitzpatrick is working closely with Arthur “Benny” Adapon ’19, an intern in Dartmouth’s Sustainability Office. Originally from the Philippines, Adapon does not come from an indigenous community. But, he says, non-natives should learn about the Foodways of Native Americans.

“Conversations around climate change have to center on the lives and experiences and knowledge of native people,” Adapon says. “Thinking about that through an environmental justice lens, native peoples have been the stewards of their lands since time immemorial.”

Adapon hopes the Foodways conference will bring wider attention to the critical role that indigenous knowledge can and should play in creating a more sustainable world.