Video: ‘Soundscapes of the Middle East’ 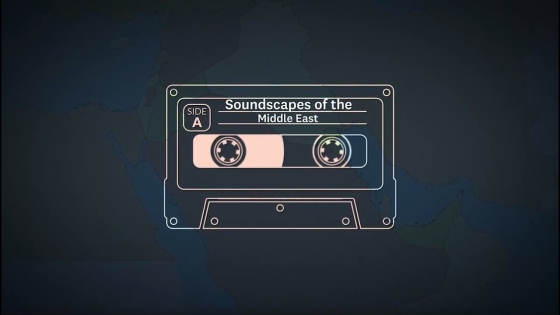 Of all the ways campus has changed during this unprecedented spring term, one of the most striking transformations is its soundscape. With teaching and learning taking place online from remote locations, the echoey silence that has replaced the typical buzz of activity in the Dartmouth Library’s cavernous Baker-Berry Library lobby might be emblematic of this moment—if anyone were there to hear it.

It’s a far cry from last winter, when Lila Watts ’22 completed her first assignment for her Middle Eastern studies class, “Soundscapes of the Middle East”—a seminar taught by Andrew Simon, a lecturer and research associate in the Middle Eastern Studies Program.

“We had to write about what a Dartmouth soundscape could tell us about Dartmouth as an institution, and I wrote about the Baker lobby,” Watts says. “There’s this low hum that’s a mix of people studying, walking through to class, chatting about social stuff. People frantically working on their academics, but also catching up with friends. It encapsulated part of the Dartmouth experience.”

Simon, a historian of the modern Middle East whose research focuses on mass media, popular culture, and sound (he’s completing a book on how audiocassette tapes and their users challenged Egyptian authorities decades before the advent of the Internet and the Arab Spring) says the course is designed to show “how the study of sound can radically enhance our understanding of the Middle East and the world around us.”

In “Soundscapes,” students explored how studying sound—from calls to prayer and Turkish jazz to Cardi B videos and Arab Spring protest chants—can add depth and resonance to historical events and “inspire us to rethink bigger ideas, from nostalgia and national identity to power and public piety,” Simon says.

Simon sees tremendous potential for undergraduates to do original research with primary sources from popular culture, social media, and the world outside their doorstep.

“When it comes to scholarship in Middle East history, there’s so much work that remains to be done,” he says. “It can be daunting, but also liberating, because the work students are performing is innovative. I encourage them to think critically about things that we encounter on a regular basis, whether it be a news coverage of something transpiring in the Middle East or a music video or a documentary film.”

Simon’s own interest in soundscapes began in 2011, when he was a recent college graduate studying Arabic in Egypt during the Egyptian revolution.

“I was at the American University in Cairo’s downtown campus, which directly borders Tahrir Square,” he says. “The first mass demonstrations that broke out Jan. 25 happened right outside of our classroom. I was intrigued by the sounds of the revolution—poets reading from makeshift stages, people setting protester chants to song.”

With his camera, Simon was able to record video and the sound of the protests from within—footage he shared with students during class nearly a decade later. That footage has historical significance, he says, because there were few Western reporters there at the time, and since then the Egyptian government has tried to suppress documentary evidence of the protests.

“When we’re learning about history, it is critical to combat efforts of collective amnesia,” he says. “In the case of the Egyptian revolution, if I didn’t have these recordings of the demonstrations in Tahrir, I may be led to believe by some people in power that those events never happened. We often believe everything online is permanent, but I’ve discovered that a lot of the videos of things like the Egyptian revolution that were on YouTube have either been deleted or turned to private settings and are no longer accessible.”

Of seeing Simon’s videos of Tahrir Square, Dania Torres ’20, a double major in government and Middle Eastern studies, says, “It’s made me more conscious of the time and place in which I’m living and how potentially all the snapshots I take—all the Snapchats, Facebook posts, everything that’s live in the moment—can have a potential impact later on.”

Simon will be teaching “Soundscapes of the Middle East” again this summer—remotely. He says he hopes students will see the course as an opportunity to appreciate—and perhaps document—the sounds of this moment.

“Currently, I am captivated by the power of sound to express solidarity,” he says of the auditory experience of the pandemic.

“Handheld videos of people cheering, applauding, and singing popular songs from their windows in support of healthcare workers and to raise the spirits of their neighbors capture our common humanity. Videos of people dancing, DJ-ing, and setting music to mundane tasks on TikTok, YouTube, and Facebook evidence the ability of sound to make us laugh, let go, and connect in a time of social distancing and self-quarantine. Our acoustic environments, much like the world around us, have changed. But hope, resilience, and unity endure in the sounds of so many.”