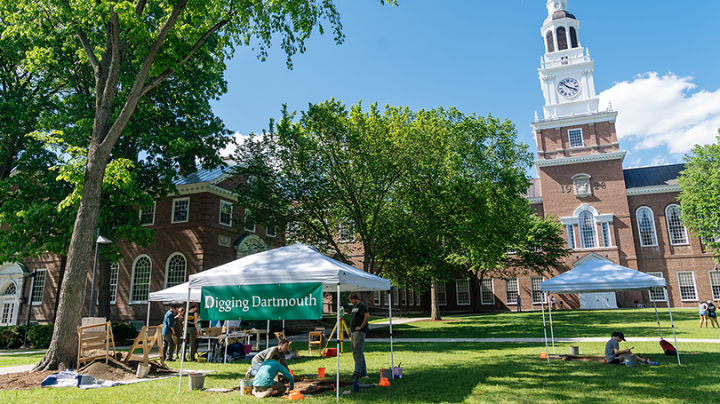 In June 2019, the Digging Dartmouth project is set up on the lawn outside Dartmouth Library’s Baker-Berry Library and the former site of the Ripley/Choate House. (Photo by Eli Burakian ’00)
5/03/2021
Body

In the early 19th century in North America, parasitic infections were quite common in urban areas due in part to population growth and urbanization. Prior research had found that poor sanitation, unsanitary privy conditions, and increased contact with domestic animals, contributed to the prevalence of parasitic disease in urban areas.

A new study examining fecal samples from a privy on campus indicates that rural wealthy elites in New England also had intestinal parasitic infections. The findings were published in the Journal of Archaeological Science: Reports.

“Our study is one of the first to demonstrate evidence of parasitic infection in an affluent rural household in the Northeast,” says co-author Theresa Gildner, who was formerly the Robert A. 1925 and Catherine L. McKennan postdoctoral fellow in anthropology at Dartmouth and is currently an assistant professor of biological anthropology at Washington University in St. Louis. “Until now, there has not been a lot of evidence that parasitic disease was anywhere else other than urban areas in the early 19th century.”

In June 2019, a team of Dartmouth researchers led by Jesse Casana, a professor and chair of the department of anthropology, excavated a privy in front of Dartmouth’s Baker-Berry Library. Earlier, an archaeological survey using ground penetrating radar instruments had identified the location as an area of particular interest. The site was home to where the Ripley/Choate House once stood. Based on historical records from Rauner Special Collections Library on campus and other sources, the researchers report that the Choate House was constructed in 1786 by Sylvanus Ripley, one of the first four graduates of Dartmouth who would become a professor of divinity and a trustee at Dartmouth. 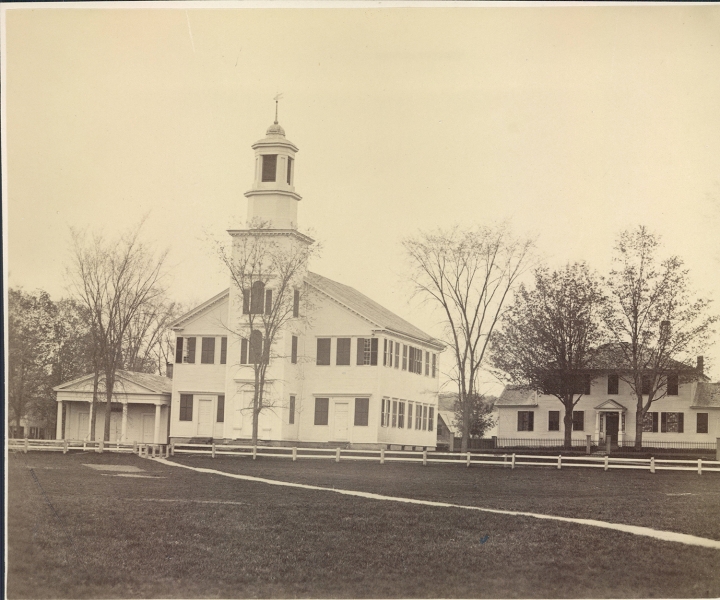 A photograph likely from the 1860s shows the Dartmouth Congressionalist Church and vestry, and the adjacent Ripley/Choate House to the right. (Photo courtesy of Rauner Special Collections Library)

In 1801, Mill Olcott, a Dartmouth graduate who became a wealthy businessman, politician and trustee, purchased the house. For several decades, Olcott and his wife and nine children lived in the house. As the study explains, the Olcotts “would have been among the wealthiest and most educated people in New England” during that time. Nearly one century later, to make space for the library in the 1920s, the Ripley/Choate House was relocated to another area of Dartmouth’s campus.

The Dartmouth dig revealed that the privy and its interior stone walls and contents had been well-preserved. A privy functioned not only as a toilet but also as a garbage, a place to discard food and other unwanted items. In the soil levels of the privy, the researchers found stratified deposits containing numerous artifacts from over the years, including: imported fine ceramics; peanut and coffee remains, which were considered exotic items at the time; and three fecal samples. In addition, 12 Hazard and Caswell bottles marketed to cure digestive ailments were found at the same soil level as the fecal samples, along with eight bottles of Congress & Empire Spring Co. mineral water from Saratoga Springs, N.Y., in a later soil level.

“The state of medical care during this time period was pretty terrible,” explains Casana. “A lot of people probably experienced symptoms of parasitic infections but wouldn’t know what was causing them. Privies would have been getting a lot of use at this time,” he adds. “If people had the means, they would order special medicines to treat an upset stomach, which were really just tinctured alcohol that offered no medicinal benefits.”

Gildner, whose research focuses on parasites, was out of town doing other fieldwork during the Dartmouth dig but had asked Casana to let her know if the team finds anything that resembles fecal material. To her surprise, Gildner learned that three fecal samples has been unearthed. “In studying intestinal parasites, I am used to working with fresh material— not fecal samples that are almost 200 years old and practically dirt,” says Gildner, who researched how to work with the centuries-old samples.

After rehydrating the fecal samples, Gildner ran them through a series of mesh sieves, from large to small, to filter out the bigger particulates and trap the small parasite eggs. The material was washed and centrifuged and slides were then prepared from each of the samples. Using a light microscope, the slides revealed that tapeworm eggs (Taenia spp.) and whipworm eggs (Trichuris trichiura) were present in each of the specimens. While the number of eggs was considered low by research standards, the parasite eggs were consistent across the three samples.

The co-authors explain that their findings are especially striking given that parasites typically prefer “warm, tropical regions” rather than the cold, snowy weather that is characteristic of New Hampshire winters, conditions which are typically thought of as inhospitable to parasite eggs.

While the researchers are unable to determine if the fecal samples came from an Olcott family member, it’s quite likely that all members of their household were exposed to tapeworm and whipworm. The findings demonstrate that parasite infection did not just affect urban and lower income areas, demographics which have been highlighted in previous research.

“I think that we take a lot of our health and infrastructure that we have today for granted,” says Casana. “Our results show that even wealth could not protect you from these parasitic infections 200 years ago.”

“Tapeworm and whipworm are still really common today in various parts of the world and can lead to nutritional deficiencies, digestive problems, and poor growth,” says Gildner. “Although these infections are preventable and treatable, there’s still more to be done to help prevent these infections. Access to clean water, which is essential to good hand hygiene, and sanitation are two things that many people still do not have today.” 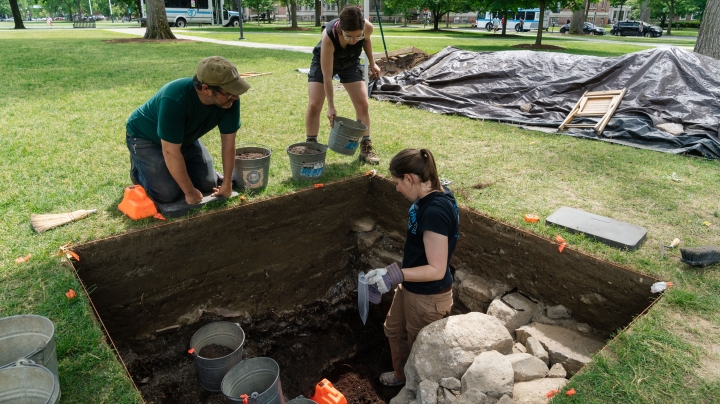 Jesse Casana, professor and chair of the department of anthropology (on the left); Keira Byno ’19; and Elise Laugier, a graduate student student in Ecology, Evolution, Environment and Society (standing in the privy); work on excavating the privy once attached to the Ripley/Choate House. (Photo by Eli Burakian ’00)
Image 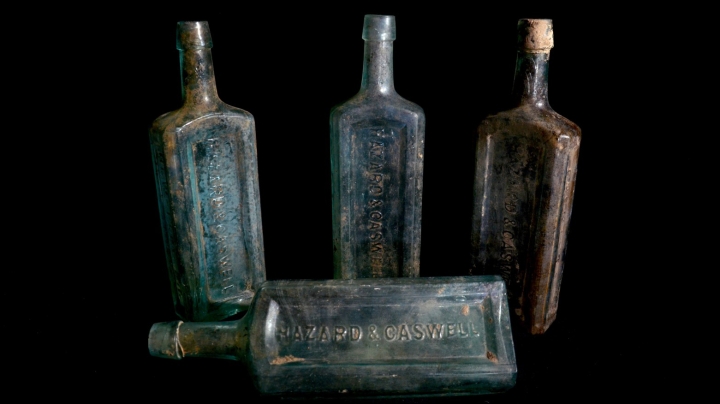 Hazard & Caswell bottles from an apothecary in Newport, R.I., which were marketed as a cure for digestive and other ailments, were one of the artifacts found in the privy. (Photo by Austin Chad Hill)
Image 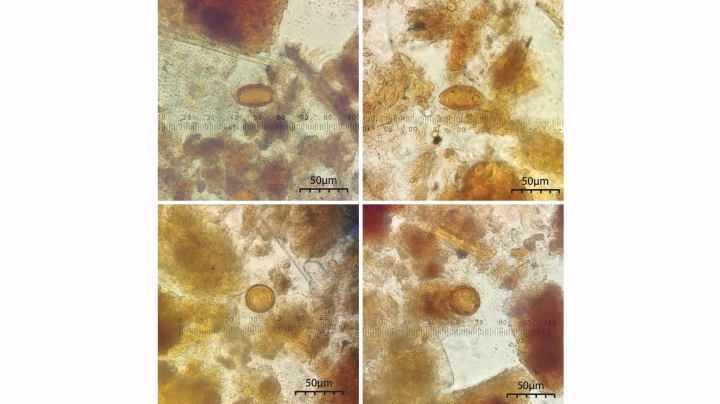 Parasite eggs under magnification. Football-shaped whipworm eggs are visible in the top row, circular tapeworm eggs with a dark outer shell are visible in the bottom row. (Photos by Theresa Gildner)
Written by
Amy Olson
Share this
FacebookTwitterEmail
In the News