The site highlights 19th-century women writers and their lessons for readers today. 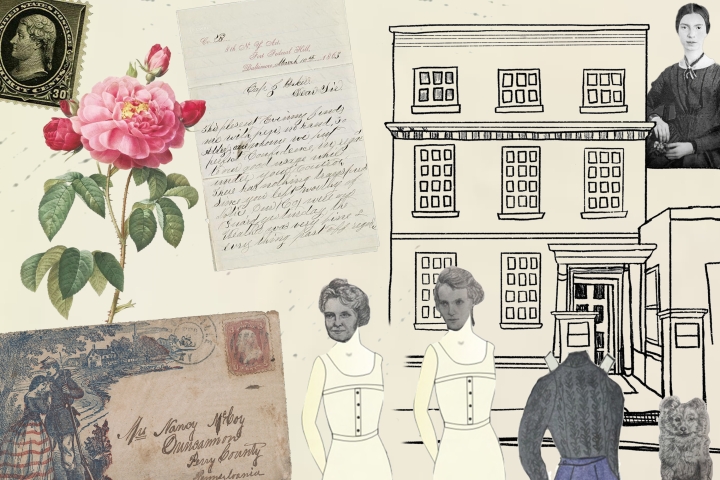 As the COVID-19 pandemic forced millions of people to work and learn from home, several faculty members in the Department of English and Creative Writing started noticing “eerie resonances” with the 19th century, the era they study.

The stay-at-home orders, the restructuring of the workforce—with the pressures of caregiving placed largely upon women—and the way the pandemic made visible, or even exacerbated, the racial and economic disparities of home and homemaking echoed the challenges confronted by women two centuries earlier, says Colleen Boggs, the Parents Distinguished Research Professor in the Humanities.

The project—a website called HomeWorks—invites visitors to explore the ways 19th-century women writers in the U.S. and U.K. addressed the challenges and opportunities of domesticity as a feminine ideal, and what lessons their lives might hold for us today.

“Home was the center of women’s creativity in the 19th century, and our ongoing encounter with ‘home’ during the pandemic offered us new insights into how 19th-century women writers used the tools on hand to make meaning,” Dever says.

An Emphasis on Accessibility

A trove of lesson plans and activities, HomeWorks offers plenty of entry points from which to explore work by the featured writers, among them Michael Field, a pseudonym for two English women—aunt and niece—who published under that name; Lucy Larcom, who worked in textile mills in Lowell, Mass., throughout her childhood but managed to become a teacher; and Sarah Winnemucca, a Native American interpreter and tribal spokesperson.

The site, designed primarily for teachers and homeschool parents, also includes resources related to 19th-century architecture, history, natural history, and art. Thoughtfully illustrated, its pages evoke the environments in which the authors lived.

The still-evolving HomeWorks site is organized into four teaching modules, each exploring the concept of home from the perspective of different women writers.

“Art and the House Beautiful” looks at how women writers use the home as a site of political and artistic expression.

“Diverging Domesticities” brings into conversation the poet Emily Dickinson, Winnemucca, and Larcom, and explores various experiences of home, based on class status, racial and ethnic identity, and region.

In “Victorian Mothers and Children at Home,” writers and photographers rethink “home” as a creative space for imagination, game play, childhood development, and business. The existing module will soon be expanded to include an essay by Emily Sun ’23 about Sui Sin Far, who is widely considered to be among the earliest—if not the first—Asian American women writers.

Far was born Edith Maude Eaton to a Chinese mother and English father, and lived variously in England, Canada, the U.S., and the Caribbean.

“She helps us to understand different cultural ideas of motherhood and domesticity, reaching across not only the U.K. and the U.S. but the immigrant communities within those two countries,” Harner says. “Her stories for children also give us insight into the cross-cultural imaginary around childhood.”

“Writing Home,” about letters from the Civil War, includes a student-created video that offers guidance on how to interpret the archival materials, Boggs says. “These letters can be difficult for modern audiences to understand.”

Each module is represented by a sketch of a house identified with the writers created by illustrator Elise Dietrich. For Harriette Yahr ’87, a visiting scholar in the Master of Arts in Liberal Studies (MALS) program who developed and produced the website, the houses offer a visual map of the site.

“We wanted to make the site inviting for different users, from scholars to high school teachers to the curious public,” Yahr says. “The houses are an engaging way to illustrate both the structure of the website and the focus of the scholarship.”

Working during the 2020-2021 academic year, more than three dozen students had a hand in creating the content, which includes videos, short films, and activities ranging from art projects and games to science experiments and writing exercises.

The downloadable content encourages students to fire up their imaginations and explore the richness of their immediate surroundings. It’s designed to be accessible to everyone, regardless of background or what materials are available at home.

‘That Feeling of Freedom and Adventure’

Lucy Turnipseed ’22, a student in Harner’s class “Victorian Children’s Literature: Fairytale and Fantasy,” wanted to remind children that they can have lofty goals, even while remaining at home.

A longtime devotee of Anne of Green Gables, by Lucy Maud Montgomery, Turnipseed was inspired by the imaginative, free-spirited main character to create a drawing and writing activity (PDF) inviting kids to dream up their own adventures in their homes or neighborhoods.

I wanted to replicate that feeling of freedom and adventure for other kids.

“Anne kind of pioneered a way for women and girls to have adventures that typically wouldn’t be considered exciting or out of the ordinary,” such as starting a story-writing club or holding elaborate tea parties, says the art history major. “I wanted to replicate that feeling of freedom and adventure for other kids.”

Public Humanities: ‘We Are All Connected’

HomeWorks was funded by a Public Humanities Grant created during the pandemic from the Office of the President, in collaboration with the Office of the Associate Dean of Humanities. With the world facing a difficult future, and imagining alternative ones, the grant called for projects that would engage campus or community partners and make the case for the necessity of “the analytical, ethical, transdisciplinary, and creative capacities” of Arts and Humanities’ work to community life.

HomeWorks was shaped by those partnerships even as it was being built.

Before creating materials for the site, students in Harner’s class met with educators in multiple states to talk about writing and designing content for children.

Public humanities is about the kind of partnerships and dialogues “that influence our scholarship and influence the work that our students are doing,” Harner says.

And last spring, students presented their projects in a discussion with Amy Earhart, a professor of English and Africana studies at Texas A&M University whose specialties include public humanities, the intersection of 19th-century studies and critical race studies, and engaging students in scholarly work.

The next step is to promote the site to educators; a student supervised by Schweitzer and Yahr is working on outreach this term.

Schweitzer, whose teaching and scholarship combine experiential learning with community-based collaborations, has long been a proponent of sharing one’s own scholarship on the web, where it’s easily accessible to the public.

The pandemic has “shown us that we are all connected globally, and we’re all dependent on each other,” she says. “As humanists, we have so much information and background and history and context that’s not just enriching but is necessary for our survival.”