Professors Horiuchi and Crabtree led study of pandemic behaviors in Japan and Korea. 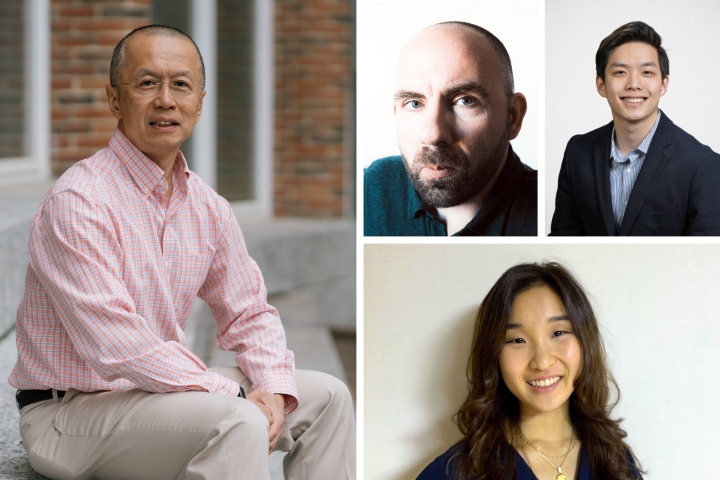 A Dartmouth faculty and undergraduate team were part of a massive international study that found people with a strong national identity were more likely to follow COVID-19 public health guidelines.

“Identity plays an important role in social life,” says Charles Crabtree, assistant professor of government and a co-author of the study. “Our research shows that this is true even in a potentially unexpected context—stronger self-identification with one’s nation corresponds with support for and use of public health measures.”

The Dartmouth team, including Yusaku Horiuchi, professor of government and Mitsui Professor of Japanese Studies, Crabtree, and then-undergraduates John Kahn ’21 and Kasey Rhee ’21, conducted research in April and May 2020 in Japan and South Korea. It was part of the worldwide collaboration involving more than 300 researchers looking at national identity and public health support among a total of nearly 50,000 respondents from 67 countries.

The paper, “National identity predicts public health support during a global pandemic,” was published in the Jan. 22 edition of Nature Communications.

This was a very interesting and rare opportunity for undergraduate students from Dartmouth to participate in a major international research project that speaks to one of the biggest issues in the world—COVID.

Horiuchi, Crabtree, and the undergraduate researchers conducted 500 question surveys with subjects in Japan and South Korea. The questions were informed by sociological, psychological, and political science theory to get at attitudes and behaviors of the public related to government public health measures early in the pandemic, before vaccines were available, Horiuchi says.

For example, a subject might be asked to rank, on a range of strongly agree to strongly disagree, statements such as, “It is important to follow public guidance on wearing a mask when visiting a supermarket.”

The data the Dartmouth team collected and the data from the 65 other countries was compiled and analyzed by lead author Jay Van Bavel and his team at the New York University Department of Psychology and Neural Science. The publication in Nature Communications consisted of two analyses of the massive data set.

In the discussion section the authors note, “Our large-scale studies suggest that identification with one’s nation is positively associated with support for and engagement in critical behavioral public health measures. Understanding the role of social identity appears to be an important issue when addressing public health crises.”

The scope of the research into public attitudes about the COVID-19 pandemic will provide valuable data for ongoing study of pandemic response, Horiuchi says. Additional papers are forthcoming from Van Bavel and his team, and the entire data set is available for any researchers interested in examining sociological, psychological, and political attitudes related to COVID-19 public health measures.

“What I thought was incredible was the number of countries in this project,” says Rhee, who majored in quantitative social science and is now pursuing a PhD in political science at Stanford.

“Especially as someone who is just getting into research as a career, seeing how researchers came together to organize and coordinate a project of this scale and produce a data set that can illuminate multiple countries at once, that was inspiring to see and something that I think was a really valuable experience for me to be part of, early in my career,” she said.

Kahn, a double major in economics and government, says doing research into attitudes about the pandemic while coping with it in his own life gave the work personal significance.

“There is a lot of uncertainty about the future in COVID, and this research felt like it was actually helping share some certainty in these times,” says Kahn, who is working as a strategy analyst for a business consulting firm in Boston.

Horiuchi praised Rhee and Kahn for their work. “This was a very interesting and rare opportunity for undergraduate students from Dartmouth to participate in a major international research project that speaks to one of the biggest issues in the world—COVID. I think their contributions are important.”