The music major wants to support other aspiring artists in Zimbabwe. 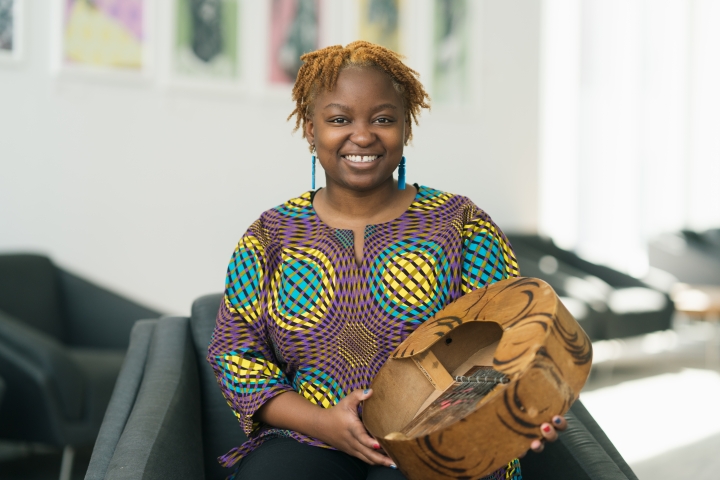 Tanaka Chikati ’25 holds the mbira she played in a video on the Google Arts and Culture website. (Photo by Eli Burakian ’00)
4/07/2022
More Reading

As a member of school music ensembles while growing up in Zimbabwe, Tanaka Chikati ’25 took the stage at the Harare International Festival of the Arts, won awards in national competitions, and performed during academic ceremonies.

Now, solo recordings by the first-year music major are being featured in a multimedia show on Google Arts and Culture that represents work by 30 African women artists. “Redefining Womanhood” was created through a collaboration whose partners include AL for the Arts, a network founded by the African Leadership Academy (ALA) to further the development of creative arts industries on the continent.

“Tanaka brings a deep well of musical experience from her study of mbira and marimba, and from years working within the rich musical traditions of Zimbabwe,” Alvarez says. “She has already made waves in the music department, with her contributions to the Coast Jazz Ensemble, her songwriting, and other musical collaborations. ... I can’t wait to see what she’s able to accomplish during her time at Dartmouth.”

‘I Still Can’t Believe It’

Chikati, an ALA graduate, made the videos for the show with help from a team that included her parents, Cecilia and Poncio Chikati. Working at home in Harare, they recorded her playing the baritone marimba. Another recording, made in Johannesburg, shows Chikati singing and playing the mbira nyunga nyunga, a Zimbabwean lamellophone, or thumb piano.

In a conversation last month at the Hopkins Center for the Arts, Chikati recalled seeing the videos online for the first time.

“Oh my gosh, you can find me on Google,” she remembers thinking, and breaks into a laugh. “I still can’t believe it.”

She has also been exploring new territory at Dartmouth. As a member of the Coast Jazz Ensemble, she’s playing another type of marimba, using different mallets and technique, and learning to improvise. In “Sonic Arts I: Machine Music,” with Associate Professor of Music Ash Fure, she explored making music on a laptop, using a digital audio workspace. And, in Alvarez’s “Songwriting I,” she tried her hand at writing music and lyrics.

“One thing I love about César is that they always emphasize that you are not going to write a fantastic song your first 100 tries,” she says. “It takes a lot of effort to get that song, and it’s OK if it doesn’t sound great. Just give whatever you have to give.”

Sharing the Gift of Music

Chikati’s earliest memory of music is singing in her church choir, which her brother sometimes conducted. In primary school, she was drawn to the marimba and to the mbira, she says, for its calming tones, which she likens to water dripping in a far-off cave. She was captain of her school’s marimba team, and later played and performed as a student at ALA.

In the future, she plans to continue sharing the healing gift of music with others, and to help ensure that other young Zimbabwean artists receive the kind of encouragement and support she has had, from her parents and teachers.

To counter that trend, Chikati wants to establish a school for African students who are gifted in the arts.

If her summer goes as planned, Chikati will begin studying traditional dance, which is integral to performing on the mbira, she says. She also hopes to intern with a virtual camp for Zimbabwean children and the related Mushandirapamwe Arts Trust, to help shape her vision for the school she aims to build.

Looking further ahead, Chikati imagines entering national politics, where she could work to advance the arts infrastructure in Zimbabwe, providing much needed employment in the country, she says. Having just traveled to New York City to see several musicals, she offers Broadway as an example.

“You have your actors, but you also have the behind-the-scenes work—hair, makeup, wardrobe, costume design, set design—all those jobs for so many people,” says Chikati, a member of East Wheelock House. “I see the big picture. It’s such a rich industry to be tapped into.”