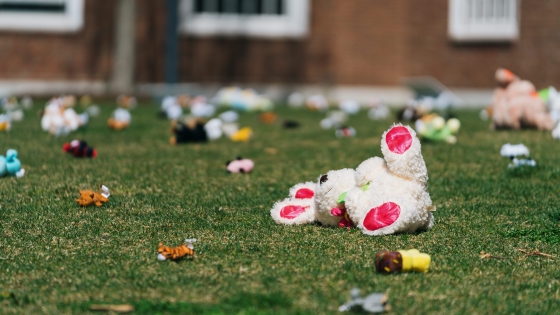 All day Wednesday until after sundown, 226 toys lay scattered on the grass of Baker Lawn, each looking like it was abandoned by a child.

It was a silent memorial to the children killed in the Russian invasion of Ukraine, created by members of the Ukrainian Student Association. The installation included signs telling of the death toll in the war, and 10 separate signs with photographs remembered individual children killed since the attack began on Feb. 24.

“The real number is expected to be much higher since many casualties are unaccounted for in occupied cities, including Mariupol, where 22,000 people are believed to have died during the siege,” one sign read.

“Some of these stories were known all over Ukraine,” says Zhenia Dubrova ’24, co-organizer of the memorial. “For example, there is this one boy, Sasha, who the whole of Ukraine has been looking for and searching for 26 days. His mother put out the call on Facebook about his disappearance. Then, after 26 days, his body was found. So some of the stories we all know and we are all haunted by.”

Dubrova is from Donetsk, in the Donbas region of eastern Ukraine, which continues to see heavy fighting. Her family is still there.

“But obviously for people here, and for students, it is not a priority to read those kinds of stories or to go and search for them, so we wanted to have it here for all the students to see. On their way to class, they can walk by and look at the photographs and take just a minute, a moment, a second to think about the scale of what’s going on in Ukraine,” she says.

Tonia Zakorchemna ’23 was taking a gap year in Kyiv when, on Feb. 24, Russian missile attacks forced her to take shelter in the subway. The next day, with just the clothes she had on and a small backpack, she met up with her family, and they crossed the border into Poland. With her family safe, she returned to Dartmouth for the rest of the term.

“We wanted to tell the stories of these children. We wanted to scream about the stories of these children, to remember them, because there are innocent lives, dreams, childhoods, families that are lost in the war in Ukraine. And I think the world must know and must care for it, because it should be, it must be, our goal to stop this,” says Zakorchemna, co-organizer with Dubrova. 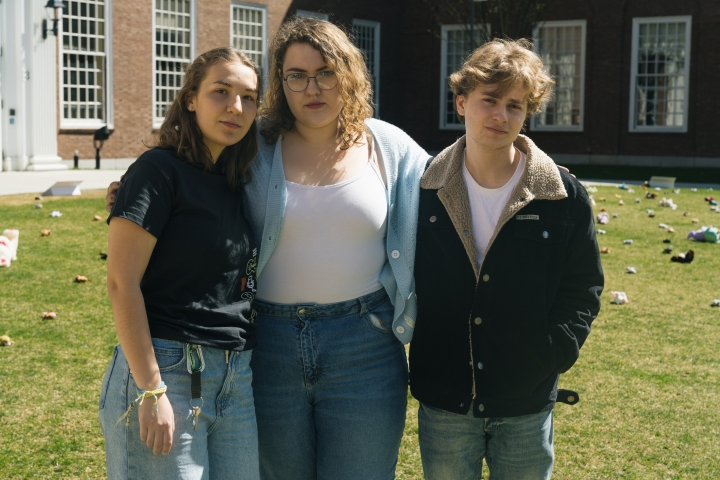 From left, Tonia Zakorchemna ’23, Zhenia Dubrova ’24, and Nathan Syvash ’25, members of the Ukrainian Student Association, set up the display on Baker Lawn. (Photo by Eli Burakian ’00)

Nathan Syvash ’25, is from Novi Petrivtsi, 20 miles from Bucha, where a mass grave of Ukrainian civilians was uncovered after Russian forces withdrew. His parents are still living in his home village where 80% of the buildings are destroyed. A 2-year-old neighbor was killed in the collapse of a building hit by a Russian missile.

Syvash says setting up the display was difficult.

“I was helping with any task I was given, but it’s just mentally hard to do it,” Syvash says. “Even now, I’m not in the right headspace because I’m an uncle. I have two nieces and my neighbor has died and it makes me think of them and makes me think of my nieces who spent the first weeks of the war in a bomb shelter without seeing sun for two or three weeks.”

His nieces are nine and two years old.

“There is no possible justification in the world that could excuse any violence toward civilians in any possible way, under any condition,” Syvash says. “This is just a principle for a better society. If there is an establishment that thinks that their geopolitical interests are more important than that, then I think such an establishment should be abolished.”

Through the day, some people rushed by the silent memorial on the way to and from the library. Others paused to read the signs and gaze at the stuffed animals and other toys scattered in the grass. 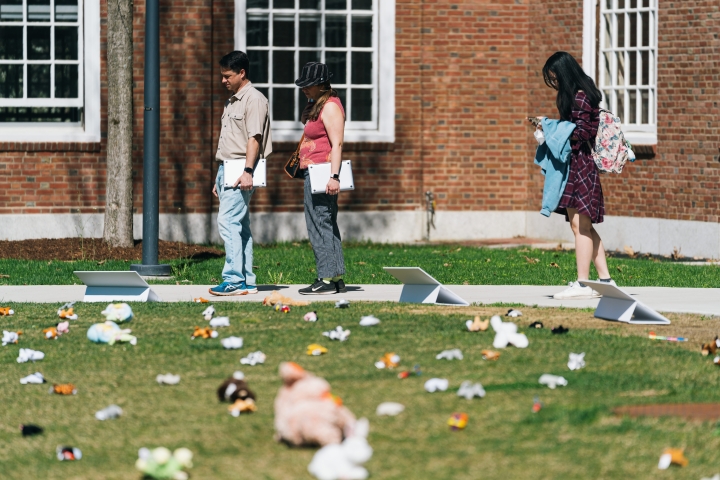 Students throughout the day looked at the display of toys on Baker Lawn to remember children killed in the Russian invasion of Ukraine. (Photo by Eli Burakian ’00)

Ryan Yong ’24 was taking a walk with a friend Wednesday evening after dinner when they happened upon the display. They paused beside each of the 10 panels dedicated to a young victim.

“To see how young these kids are—the fact that there’s no distinction between children and soldiers. It’s indiscriminate. It’s just murder,” Yong says.

“This sort of thing, it makes you see that these are individuals, not numbers. Even though they’re not any of my dear friends, the fact is there are other Ukrainians on this campus ... fellow students ... and just being able to share their perspective like this, it brings it close enough to where you can really feel it.”

Thursday evening on the Green, #DartmouthStudents4Ukraine, a group founded by students from across Dartmouth, launched a fundraiser in partnership with Granite United Way to support Ukrainian refugees. Donations can be made via the Granite United Way or by texting “Dartmouth” to 41444.