Texas native is considering a career in voting rights law. 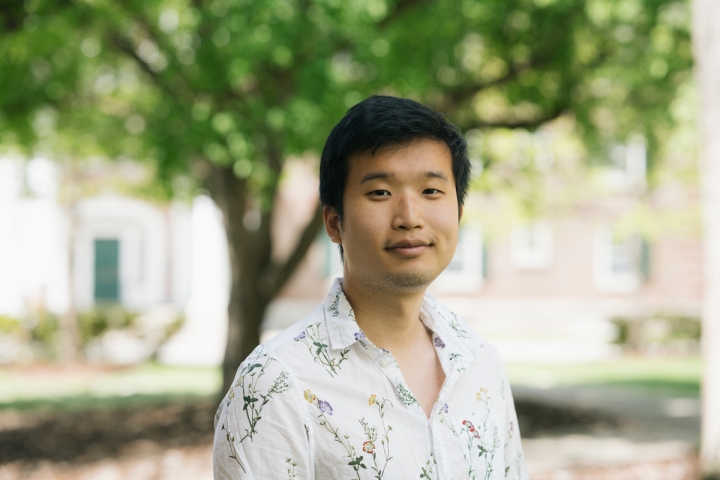 John Cho ’22 sees issues of identity and politics as common threads in his time at Dartmouth.

In four years, Cho developed a broad resume that includes founding the Asian Pacific Islander Council, organizing a vigil to raise awareness of violence against Asian Americans, and working for the Department of Justice Civil Rights Division on the filing of U.S v. Georgia, the 2021 case asserting that the state violated the Voting Rights Act with laws “intended to deny or abridge the right to vote on account of race or color.”

Cho, a government modified by philosophy and quantitative social sciences major with a minor in music, just completed his senior thesis with advisers Mia Costa, assistant professor of government, and Yusaku Horiuchi, professor of government. His thesis looked at how Asian American voters negotiate between partisanship and ethnicity when voting for Asian American candidates. He finds that Asian Americans are only willing to vote across party lines when a candidate is of their own ethnicity, an affinity that doesn’t spill over to other Asian ethnicities.

And a paper, “Who stands next to whom?,” a study of voting lines co-written with Michael Herron, Remsen 1943 Professor of Quantitative Social Science, is under review for publication.

Understanding the ways in which a group as broad as the Asian American Pacific Islander community finds common ground while accepting the importance of those differences is essential, Cho says. Trying to understand how those tensions are reflected at the ballot box is a common theme in his research, his organizing work, and his community support efforts, says Cho, who grew up in Austin, Texas.

“In terms of my community organizing, and my work on campus, and also applying these questions to my own academic work in politics ... I am interested in how difference within commonality affects our political behavior.”

In four years, he has supported the Asian and Pacific Islander community as a staff member in the Office of Pluralism and Leadership, and last year, he helped to organize the Asian Pacific Islander Council, which brings together diverse Asian affinity groups such as the Korean Student Association, the South Asian Student Association, and the Dartmouth Asian Organization. Cho says his understanding of the interplay of identity and ethnicity influences the process of finding common ground and initiating collective political action.

“It’s difficult bringing such a disparate group of people together, but in the past year or so the Asian American community has faced a reckoning about what it means to be Asian American in the face of all the violence Asian American people have been confronted with nationwide,” Cho says.

Anti-Asian exclusion and hate are not new, Cho says. “The pandemic brought them into the national conversation, but anti-AAPI hate has existed for centuries, even from the early history of the United States and some of the laws that tried to keep Asians out of the U.S.”

The newly formed Asian Pacific Islander Council organized a vigil outside Collis on March 4, the one-year anniversary of the Atlanta-area spa shootings, a high-profile attack on the Asian community amid rising numbers of anti-Asian incidents.

“I met John for the first time via Zoom in a meeting among the staff, faculty members, and students to discuss the issues of growing anti-Asian crimes,” Horiuchi says.

“We started some brainstorming for his research projects soon after we met, and he ended up completing an innovative honors thesis measuring Asian Americans’ attitudes toward Asian American politicians.”

Horiuchi and Cho’s research was based on a statistical method called “fully randomized conjoint analysis,” a method for estimating multidimensional preferences, Horiuchi says.

“His research contributes to our understanding of attitudes toward and among Asian Americans,” Horiuchi says. “His academic excellence, combined with his devotion to community building, is simply amazing.”

Cho will begin a pre-PhD program in the Yale political science department, where he will continue doing research on political candidates, and he is considering going on to a joint PhD-JD program. He says his experience working for the Justice Department inspired him to consider returning to work for them on voting rights.

“I see voting rights tying into all of this,” Cho says.

Building community coalitions and understanding how affinities affect political behavior are important, he says, “but you can’t participate in politics if you don’t have the right to vote.”