From Kuwait to Hanover: A Summer of Learning

The American University of Kuwait partners with Dartmouth to build cultural bridges. 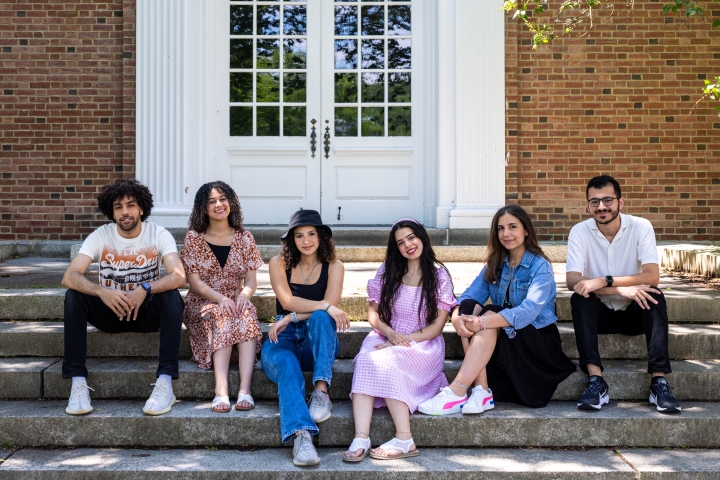 Six students from the American University of Kuwait, the first liberal arts university in the Middle Eastern country, are spending the summer on campus taking classes, serving as interns at the Tuck School of Business and the Office of Communications, and immersing themselves in a culture and climate very different from their own.

Established in 2003 as an independent, private, coeducational institution, AUK offers a liberal arts education based on an American model developed as a result of AUK’s long-standing collaboration with Dartmouth. The partnership was spearheaded by Dale Eickelman ’64, the Ralph and Richard Lazarus Professor of Anthropology and Human Relations emeritus and director of the Dartmouth—American University of Kuwait Program.

“We’re thrilled to welcome summer interns back to Hanover after a two-year hiatus due to COVID-19,” says Deputy Director Kerry Laufer. “The internships are our flagship project. And we have just launched an exchange program, Dartmouth’s only study-abroad opportunity on the Arabian Peninsula. The first two AUK students to participate in this program, Farida Mohamed and Ali Darwiche, are here this summer. Matthew Pfundstein ’24 and Nick Luikey ’24 are expected to study abroad at AUK this fall.”

The four interns and two exchange students from the AUK here now recently held a virtual meeting with Dartmouth News to describe their roles on campus and share perspectives on their summertime home.

Taibah Al-Eissa, who studies marketing at AUK, is an intern with Tuck’s Executive Education Program:

“The tasks are very interesting—we get to learn about data entry. I am also auditing a class in criminal law because I am curious about how that is handled in a country different from my own. At Dartmouth, unlike AUK, life feels like it’s in slow motion. In Kuwait, everything is so fast-paced, and the moment we came here, there was a sense of peace.”

“I’m taking ‘Cultural Anthropology,’ ‘Modern Religion,’ and ‘American Political Systems.’ It’s great that the concepts that I am learning can be incorporated into engineering. One thing I have noticed about Dartmouth is that compared with where I came from, the workload is…well…a lot. You read, prepare, and then you come to discuss it in class, and all of that combined gives you more enriching experience, rather than just saying, ‘Well, I read it and I’m done.’ I get to learn more by hearing what everyone else is saying. I feel that even the professors learn from that as well.”

Omar Hedeya majors in international relations at AUK, and is an intern in the Office of Communications with a focus on social media:

“So far I’ve created two reels, putting together short videos, for Instagram. One is about how people experience the Green and the other is about indoor study areas. I’m also researching the policies of universities around the United States relating to social media accounts. One thing I’ve noticed is the degree of diversity on this campus, which is not something I experienced in Kuwait. Here I am meeting Mexicans and Jamaicans and Native Americans and learning about their lives and cultures. I’m also taking a class called ‘Radical Islam: Jihadis, Salafis, and Radical Reformists in the 20th and 21st Century.’ We don’t really have religion classes back home, because people might get offended or triggered from what is said or being told in the class, so that’s why I am taking it, to see how it’s offered in a country that’s not all that familiar with Islam.”

Abeer Kablaoui majors in communication and media at AUK and is an intern in the Office of Communications:

“In Kuwait, I was working in the Office of Student Affairs. The work here is similar, but the atmosphere seems more open, and we are encouraged to use our creativity more, to make reels. My current task is to observe students, especially in the dining halls. What do they eat? What do they ask for? I will create another reel about the free shuttles that take people around on campus. It seems like many students don’t know how to use them, so my reel will introduce them to the shuttle system, which I think students should take advantage of. Compared to AUK, this campus is very large, and open, and also more open-minded. I feel less judged here, and free to say whatever I want.”

Farida Mohamed, an exchange student, majors in mass media and communications at AUK and is also active in theater:

“Last year, I had a virtual internship at the Rockefeller Center for Public Policy, auditing marketing strategies for its programs. Now, in the exchange program, I am taking two film classes and one Arab theater class. So I feel like I’ve got the best of two worlds. We’ve been reading and acting out Egyptian and Syrian plays from the 19th century and trying to connect them with our contemporary world. What’s different about Dartmouth is the weather. We’d be melting back home. This is like winter for us, except that it’s so green, and there are so many places you can go on campus to study, and also we have flexibility and freedom to go to the library at 10 p.m. That’s completely new to us because we all live with our families back home.”

Farah Hassan Saad majors in business administration/marketing at AUK and is an intern at Tuck:

“I’m originally from Lebanon and I’m a senior at AUK. At Tuck, I’m doing a lot of administrative work. One big project is a strategic plan to implement COVID protocols for our programs to ensure a safe experience for all the executives who come here to learn. Stepping into a new experience is something incredible. The adrenaline rush we’ve been having since the first time we stepped into the U.S. is really nice. At Dartmouth, the most exciting things are simple things, like having casual conversations, sharing experiences, and exchanging cultures.”