The theater residency brings alumni together with students to create daring new work. 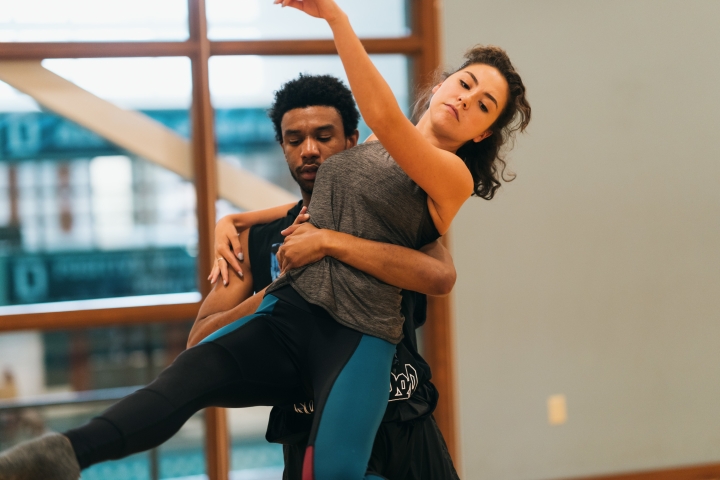 VoxLab is entering its second decade with grit and gusto, presenting three very different works-in-progress at the Warner Bentley Theater this weekend.

The annual summer residency gives alumni and other theater professionals space and time to experiment, enlisting students in the creative process and fostering a network for alumni in the arts. Matthew Cohn ’08, a New-York-based interdisciplinary artist who combines printmaking, photography, text, music, and sculpture to create new kinds of theater, co-founded the incubator program in 2012 with Thom Pasculli ’05 and Kate Mulley ’05.

Cohn, who now co-produces VoxLab with his partner in life and work, Nicolle Allen ’16, says the past 10 years have been a time of immense growth and change for his “theater home away from home.”

“The work that we do has become increasingly sophisticated and more experimental,” says Cohn. “As we get closer to the cutting edge, it’s been interesting to see how theatrical trends in general have changed, and that’s reflected in the projects that are brought forward.”

Allen, a tailor and costume designer who has worked on Saturday Night Live, the film remake of West Side Story, and the HBO series, The Gilded Age, is currently wardrobe manager for NBC’s The Amber Ruffin Show. As a Dartmouth student, she participated in VoxLab (originally called VoxFest), and later became student coordinator.

“I think the students’ involvement and experiences have become a lot deeper and more fulfilling over time,” says Allen. “They’ve greatly appreciated being able to work directly with these new artists instead of playing spectator roles. We’ve really worked hard on the treatment of students as artists in their own rights.”

As we get closer to the cutting edge, it’s been interesting to see how theatrical trends in general have changed, and that’s reflected in the projects that are brought forward.

Alongside enrollees in “Theater 65,” a hands-on summer course, Voxlab 2022 casts and crews are developing thought-provoking pieces. At 8 p.m. on Saturday, Gabrielle Farah directs Osher and the Infinite Curtain, by Elise Wein ’17. An adaptation of S. Ansky’s The Dybbuk, the play explores themes of love, loss, and demonic possession.

The weekend line-up takes an absurdist turn at 1 p.m. on Sunday afternoon, with We Do the Same Thing Every Week, by Robert Leverett ’16, directed by Liza Couser ’17. In the one-act play, characters iconically named Dick and Jane get bored on a Sunday afternoon, and when a six-foot cat shows up, hijinks happen. The plot repeats itself, weirdly filling what seems to be a vacuum of space and time.

Sunday evening brings, at 7 p.m., Female Complaints, in which history eerily presages recent events. With music and lyrics by Tina deVaron, book and lyrics by co-founder Mulley, and music direction by David Maglione, the story centers on Inez Ingenthron, a turn-of-the-century abortionist in San Francisco who gets targeted by the city’s power-hungry district attorney.

Allen sees a thread running through all three works: timeliness.

“Elise’s piece deals with being in the middle of the pandemic. Robert’s piece takes us to the end of the pandemic and how the characters coped with it. And Kate’s piece really brings us into the present. It’s a fascinating journey that you get to go through, watching each of these plays,” she says.

For Cohn, the ability of VoxLab to reach its tenth birthday, and to look beyond it, is a story in itself.

“I think theater is the most vulnerable art form in a pandemic,” he says. “It’s been very exciting to see new, challenging, and innovative work still being made. There’s still an appetite for it. People should come, see, and reconnect to why theater is so important in our lives.”

All three VoxLab productions are free and un-ticketed. Find a full schedule at the Department of Theater website.