The president gives his final “State of the College” address to the General Faculty. 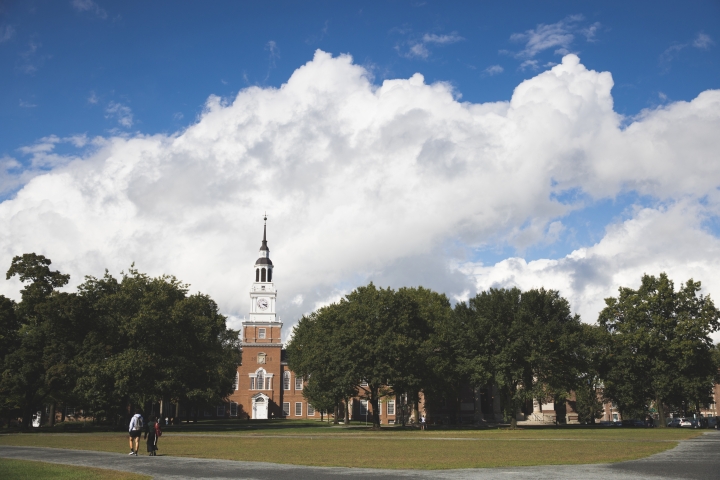 In his final “State of the College” address to the annual meeting of the General Faculty on Monday, President Philip J. Hanlon ’77 reflected on the strides Dartmouth has made during his administration and previewed some of the work still to come in the remaining months of his tenure.

“As I look back at the last decade, our community is our greatest strength,” President Hanlon told the faculty gathering, which was held by Zoom.

Because of this, Hanlon said, “I can report that the state of the College is robust and dynamic.”

One lesson I will pass on to our next president is that no bar is too high for Dartmouth when we are united in our cause.

Among Dartmouth’s successes during his tenure, Hanlon—who is stepping down at the end of the current academic year—highlighted the academic clusters; fellows programs for emerging scholars; transformational investments in student financial aid; and new and revitalized facilities, including the Arthur L. Irving Institute for Energy and Society, the Class of 1982 Center for Engineering and Computer Science, Dartmouth Hall, the Hood Museum of Art, and—soon—the Hopkins Center for the Arts.

Noting that the Call to Lead Campaign is poised to become “the only $3 billion campaign at any institution in history to have also achieved a 60% or higher participation rate from alumni,” Hanlon said the fundraising drive has demonstrated “that when the Dartmouth family comes together we are unstoppable. One lesson I will pass on to our next president is that no bar is too high for Dartmouth when we are united in our cause.”

Hanlon’s remaining priorities include the completion of the Call to Lead Campaign, creation of a unit to support potential new revenue-generating activities; unveiling an updated strategic plan for diversity, equity, and inclusion; implementing the athletics action plan; an ongoing exploration of how to better empower the Arts and Sciences division to pursue its most important priorities; and the celebration of the 50th anniversary of coeducation—the last of “an incredible year of golden anniversaries.”

In addition, Hanlon said he plans to teach this year, as he has every year of his presidency. The president will return to the classroom during the winter term to teach “Introduction to Combinatorics.”

“This is the course that turned my 19-year-old self onto mathematics—a budding interest that was then nurtured at every turn by the Dartmouth faculty of the time,” he said.

It was an experience that showed Hanlon the power of Dartmouth’s emphasis on faculty-student engagement, the liberal arts, and “the profound sense of place and the adventuresome spirit it instills,” he said. “That magic combination is what brought me back to Dartmouth all these years later with the privilege of serving the institution that had done so much for me.”

Hanlon said that he has been working closely with President-Elect Sian Leah Beilock on the presidential transition.

“Sian is smart, and she’s energetic, and she places a high priority on academic excellence,” Hanlon said. “I’m confident that Dartmouth has a bright future ahead.”