Flag raising and run, veterans’ panel, drill and retreat on the Green among events. 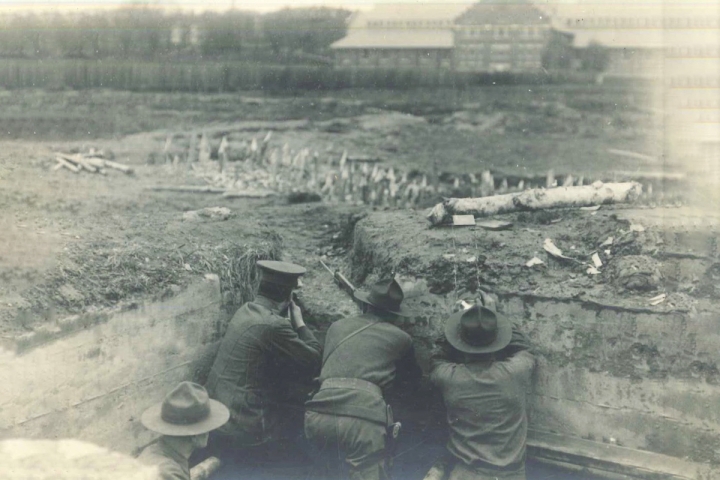 An exhibit at the Rauner Special Collections Library includes this photo from World War I, where under the Students Army Training Corps program Dartmouth began training students in earnest for front-line action. A portion of the athletic fields was converted into a realistic trench system named “Occom Trenches,” where Dartmouth recruits would stage mock sorties during halftime of football games. (Photo courtesy Rauner Special Collections Library)
11/08/2022
More Reading

To mark Veterans Day, Dartmouth is hosting a series of events, exhibitions, and ceremonies this week to honor and thank military service members.

They include the tolling of the Baker Tower bells at the eleventh hour of Nov. 11; a Rauner Special Collections Library exhibit documenting Dartmouth’s service members from the founding of the college to the present; and a flag raising at dawn Friday, followed by a five-mile run dedicated to President Emeritus James Wright, a Marine Corps veteran who died last month at his Hanover home at 83.

Ryan Irving ’24, president of the Dartmouth Student Veterans Association, says Veterans Day offers a chance to highlight the contribution of veterans to the academic and cultural community of the College, and for the community to say “thank you.”

“The student veterans community at Dartmouth represents all kinds of backgrounds and human experiences that we are able to share with the Dartmouth community. And on the flip side of that, people with those experiences learn a lot from other students at Dartmouth,” Irving says.

The student veterans community at Dartmouth represents all kinds of backgrounds and human experiences that we are able to share with the Dartmouth community.

Official events on Friday, Nov. 11, start at 6:30 a.m. on the Green with Jason Mosel, a network engineer for Information Technology and Consulting and coordinator of the Dartmouth Veterans Employee Resource Network, raising the American flag in honor of Veterans Day and Wright’s commitment to Dartmouth’s veterans.

Mosel is inviting community members to join him on a five-mile run around campus dedicated to Wright. For Mosel, a Marine Corps veteran, the community run will be the final lap of a 100-mile run that starts at Moosilauke Lodge at 5 a.m. on Thursday, Nov. 10. 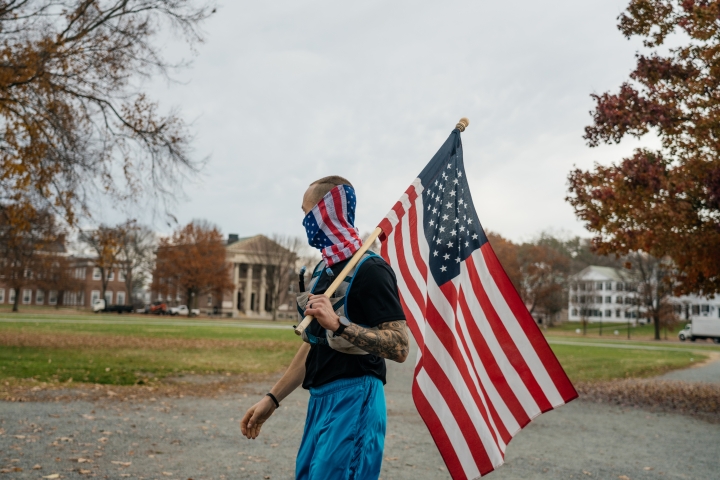 Mosel, an ultra marathoner, ran 100 miles around the Dartmouth campus and surrounding area concluding on the Green on Veterans Day 2020. He says both runs were conceived as a way to show solidarity for, and raise awareness about, veterans in the community. Mosel’s run can be tracked in real time through a GPS app.

For those who served, returning to civilian life can often leave them feeling isolated and detached, Mosel says.

“One of the biggest things we are trying to do is get the word out that there’s a community of people at Dartmouth. And as you start to meet people, and you realize this person was in Vietnam, this person is a Marine who served two tours in Iraq, this person is married to someone or has a child that served, you start to build that community.”

In addition, information about Headspace, the mindfulness and well-being app being offered to faculty, students, and staff, as well as local resources available for the veteran community, will be available on the Dartmouth Green, adjacent to the flags.

The John Sloan Dickey Center for International Understanding on Thursday will be holding a “conversation on character, leadership, and service, and the unique challenges of our time” with Maj. Gen. Mark Anarumo, the president of Norwich University, at 12:15 p.m. in Haldeman 041. The conversation is co-sponsored by the Nelson A. Rockefeller Center for Public Policy and the Social Sciences and will be moderated by Department of Government Chair Benjamin Valentino and will also be livestreamed.

The Office of Human Resources is sponsoring a breakfast at 8 a.m. Friday to honor the community’s veterans at the Class of 1953 Commons North Dining Hall. The breakfast is open to Dartmouth community veterans, families, faculty, and staff. Registration is required.

Veterans Day events conclude at sundown Friday with the retreat and drill ceremony conducted by the Dartmouth ROTC at the campus flagpoles on the Green starting at 5:15 p.m. The public is invited to attend.

Other events throughout the week include a panel discussion, “Critical Dialogues: Experiences of Student Veterans,” on Wednesday, Nov. 9, at 3:15 p.m. in Baker 102. The event is sponsored by the Dartmouth Center for the Advancement of Learning and registration is required.

And the special exhibit, “A Fighting Tradition: Dartmouth in American Wars,” curated by Irving, is on display in Rauner’s Class of 1965 Galleries. On display through Dec. 3, the exhibit uses archival collections to explore Dartmouth’s historic involvement in the country’s major conflicts. 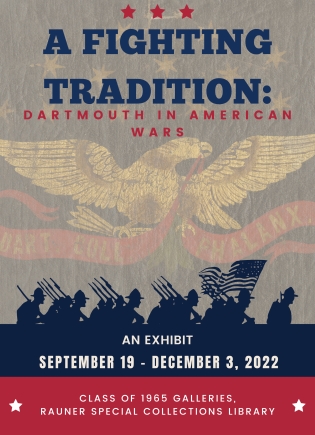 The display begins with a letter from George Washington to Joseph Johnson, the son-in-law of Samson Occom, asking him to relay a message to the Iroquois Confederacy asking for their neutrality in the Revolutionary War. The final display includes military awards, medals, uniform patches and other pieces on loan from current members of the Student Veterans Association.

There are artifacts and documents illustrating the trench network dug in Memorial Field for trench warfare training of Dartmouth World War I recruits; documents and photos of the World War II Navy officer training program at the College; and soldiers’ letters paired with newspaper accounts of the anti-war movement on campus during the Vietnam War.

After acknowledging the unrest from that period, Irving concludes his written commentary on the exhibit, “However, in the early years of James Wright’s presidency, and because his influence at a national level, Dartmouth was afforded the opportunity to support the war effort in a new way: by welcoming veterans to campus as students, along with the wealth of experience and diversity that they brought with them.”

Irving says he was able to consult with Wright about the exhibit earlier this year. Wright’s contribution to veterans’ access to higher education—not only at Dartmouth but at colleges throughout the country with his work on the new GI Bill— cannot be overstated, Irving says.

“I’ve said this probably a hundred times. He was our hero, but he’s a hero to all veterans. His compassion and care was always present.”