Programs will be held in a variety of venues after the building closes this month. 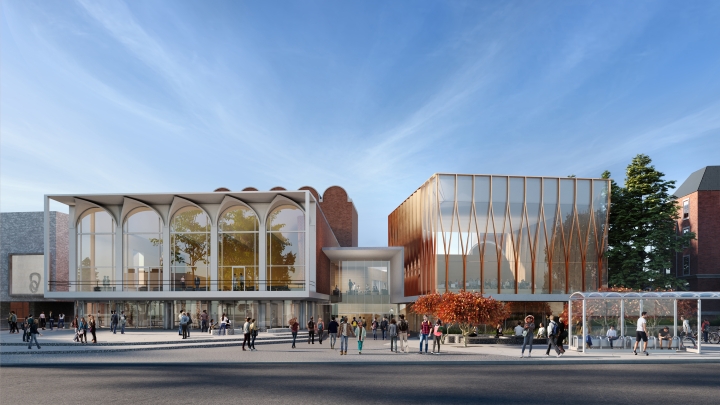 A rendering of the north facade of the Hopkins Center for the Arts includes a new wing for arts programs. (Courtesy of Snøhetta and Methanoia)
11/10/2022
More Reading

From a fresh take on the classic Broadway show Pippin to a collection of whimsical family films to a moving interpretation of Aaron Copland’s Lincoln Portrait, the Hopkins Center for the Arts is celebrating 60 in style. The anniversary events also mark a historic juncture for the performing arts center, which will pivot to offer programming in creative new ways when the Hop building closes for an expansion and renovations later this month.

The Hop is encouraging the entire community to join in the array of arts activities on Nov. 12 and 13, adding to the buzz on campus this weekend; celebrations marking the reopening of Dartmouth Hall and the 50th anniversary of co-education at Dartmouth are set for Friday and Saturday.

The Hop lineup for Nov. 12 features a performance by the Dartmouth Symphony Orchestra and a talk by Mary Lou Aleskie, the Howard Gilman ’44 Executive Director of the Hop.

Aleskie will highlight what the community can look forward to following the Hop’s upcoming transformation, an $88 million project that will add approximately 15,000 square feet of new space to the building and transform 55,000 square feet of existing space. The work, led by internationally renowned design firm Snøhetta will dramatically amplify the Hop’s impact as an artistic hub and catalyst for artistic expression. With a sculpted exterior plaza, versatile rehearsal and presentation spaces, and expanded and improved learning and creation spaces, the Hop will serve as a welcoming anchor in the vibrant Dartmouth Arts District.

The next few years represent a tremendous opportunity to bring vibrant programming to venues across campus, the Upper Valley, and beyond.

Aleskie says she’s excited about fresh initiatives in the works for when the Hop is undergoing renovations.

“The next few years represent a tremendous opportunity to bring dynamic programming to venues across campus, the Upper Valley, and beyond, through emergent and existing artistic partnerships,” Aleskie says.

During the renovations, which will be ongoing through 2025, the Hop will continue its collaboration with organizations such as the Vermont Dance Alliance and cultivate relationships with new partners, including the Claremont (N.H.) Opera House.

The Black Family Visual Arts Center will continue to host Hop films, public talks, special events, and student workshops. The Hop also will deepen its work with other campus partners, among them, Baker-Berry Library, Dartmouth Athletics, Collis Center for Student Involvement, the Hood Museum of Art, Tuck School of Business, the Office of Institutional Diversity and Equity, and various academic departments, Aleskie says.

Beginning in late January, resident and visiting artists and ensembles will take the stages for performances in Rollins Chapel and the Church of Christ. And surprises are also in store.

“Be on the lookout for arts activities in pop-up venues and innovative creation spaces around campus,” Aleskie says. “In short, we’re not closing—we’re everywhere.”

During the renovations, the music and theater departments will find a home in Sudikoff Hall, which includes room for collaboration, practice, and rehearsals. The Hop’s ever popular studios will also be relocated temporarily to BVAC and its surrounding area. The Courtyard Café will remain open during the renovations.

Taking the Show(s) on the Road

Looking ahead, the Hop will continue to invest “in the creation of powerful works that explore timely issues,” and to support talented artists in bringing their visions to life, Aleskie says.

Recently, such productions have resonated with national and international audiences.

The Ritual of Breath Is the Rite to Resist, an opera calling for social justice, was produced and commissioned by the Hop. Following its premiere at Dartmouth in September, the production was presented at Stanford University. It’s currently under consideration by a number of organizations for residencies and touring in upcoming seasons, Aleskie says.

Dance Theatre of Harlem’s 2022-2023 schedule features a production developed during a multi-year residency at the Hop. Sounds of Hazel: The Hazel Scott Ballet celebrates the legendary jazz singer’s contributions to music, film, and racial justice. The work premiered last month at the Sidney Harmon Theater in Washington, D.C., and was recently performed at the Charleston Gaillard Center and the Paramount Theatre in Seattle.

Mark Morris Dance Group’s Pepperland, co-commissioned by the Hop, has been touring nationally and internationally since its 2017 world premiere in Liverpool. The hourlong show pays tribute to the 50th anniversary of the Beatles album Sgt. Pepper’s Lonely Hearts Club Band.

Morris’ The Look of Love, commissioned by the Hop, premiered last month at BroadStage in Santa Monica, Calif. The show, an homage to pop music giant Burt Bacharach, recently played at the Eisenhower Theater in Washington, D.C.

Designed by Wallace Harrison, the architect of Lincoln Center in New York City, the Hop opened in November 1962. The weekend-long celebration of the 60th anniversary will include the concert by the Dartmouth Symphony Orchestra on Nov. 12, featuring Hector Berlioz’s Symphonie Fantastique and Piano Concerto in One Movement, by Florence Price. Actress and Hop board member Sharon Washington ’81 will be the narrator for Copland’s Lincoln Portrait.

A fun-filled afternoon of activities—live music, a children’s film festival, and student productions—is on the program for Nov. 13. First off will be a cupcake and champagne toast, music by DJ Sean, and more, at noon at Top of the Hop.

For the complete listings, check out the Hop calendar.

Tuesday, Nov. 15, marks the last day programs will take place in the Hop before it closes for renovations. The Handel Society of Dartmouth College will perform at 7:30 p.m. in Spaulding Auditorium, and the Dartmouth Dance Showcase, hosted by the Dartmouth Dance Ensemble, is set for 8 p.m. in Moore Theater.

And yes, there will be a chance to express personalized messages of appreciation to the existing Hop for its 60 years of service at a party on Nov. 15 that will include time to write messages on the walls of the building.