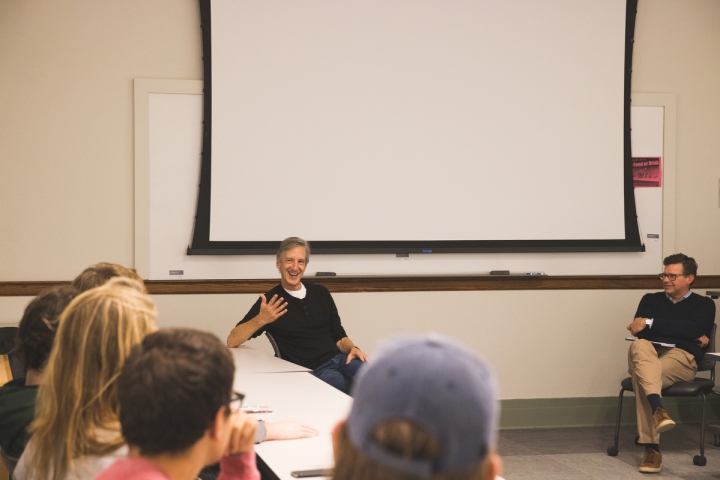 Charles Wheelan '88 Foretold of Pandemic in His First Novel

While visiting a Dartmouth writing workshop last week, author and satirist Andy Borowitz told a story about the safe, financially secure future his parents saw for him after graduating from college.

“They said that they would support me 100% in anything I wanted to do—as long as it was law school,” Borowitz joked.

Borowitz found the idea of law school “horrible,” but it drove him to pursue his passions in a way he might not have without an LSAT prep book lurking in his closet. He got involved with theater, wrote for the Harvard Lampoon, and performed stand-up comedy. During his senior year, a TV producer saw his set and invited him to Hollywood, where Borowitz found success with shows such as The Fresh Prince of Bel-Air.

Borowitz, who was the guest speaker for the last of the three-session writing workshop sponsored by the Political Economy Project and led by Charles Wheelan ’88, encouraged students to do things they cared about instead of what they viewed as safe. He and Wheelan both noted they’d seen a lot of lawyers squeezed out of a presumably ‘safe’ profession.

“One thing I’ve kind of figured out in the intervening decades is that nothing is really safe,” Borowitz said, advising the students to pursue something they want to do.

Not that doing what you enjoy is any guarantee for success, as Borowitz recalled working on TV shows and movie scripts that went nowhere. But he offered the improv performer’s maxim of ‘Yes, and …’—you accept an idea and add to it instead of saying no—as a good strategy for developing a writing career.

“In the beginning, there wasn’t anything I thought too highly of myself to take on, or I thought was beneath me,” Borowitz said. “I thought that pretty much you should try to do everything.”

Borowitz, who lives in Hanover and also spoke at a Hopkins Center event last month, seems to have followed that advice. After his years in Hollywood, he moved back east where he hosted The Moth, a radio storytelling program, and now writes for The New Yorker. His most recent book, Profiles in Ignorance: How America’s Politicians Got Dumb and Dumber, explores why many political leaders don’t seem very well informed.

A lot of what I emphasize is get to the point really quickly.

But in writing that book, Borowitz forgot about an important lesson that he stressed to students: it’s OK to use a conventional story structure with a beginning, middle, and end. He’d tried to insert a big flashback in the book that only confused his early readers.

“Shakespeare doesn’t do a lot of backstory,” he said. “It’s very propulsive and it moves forward. There are no flashbacks in Shakespeare, I don’t think.”

Another writing insight Borowitz shared was the importance of theme. Even in comedy, such as “The Borowitz Report” in The New Yorker or TV’s Fresh Prince, good writing resonates when it grapples with universal issues.

“There usually has to be some basic kind of thematic truth to the joke,” he said.

Wheelan, a senior lecturer at the Nelson A. Rockefeller Center for Public Policy and the Social Sciences, agreed. A former Chicago-based reporter for The Economist, he had to write stories that would ring true to the magazine’s global audience, even when they were about local issues.

Though his background is in policy, Wheelan is also an accomplished writer with several books to his name including Naked Economics; We Came, We Saw, We Left, about a family gap year; and Write for Your Life, a writing guide that was formative for the writing workshop.

Wheelan credits some of the early development of his writing skills to the summers he worked as door-to-door salesman for a driveway sealing company.

“A lot of what I emphasize is get to the point really quickly,” he said. “We had two sentences at most to get them to listen to the rest of the pitch.” 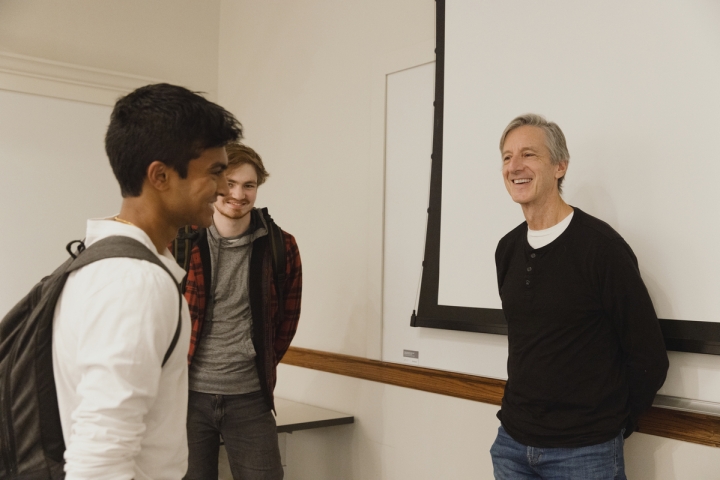 “It challenges me, but in a good way,” she said.

Anders Knospe ’23, who writes for The Dartmouth Jack-O-Lantern humor magazine, expects to do a lot of writing after college, and he liked the emphasis on persuasion Wheelan included in the workshop.

“You’re trying to get the reader to laugh or agree with you,” Knospe said.

Borowitz wrapped up his time at the Oct. 24 workshop by reminding students of the power of telling stories in whatever kind of writing they do.