“Every once in a while, a kid walks into your life who’s special,” says Dartmouth Men’s Golf Coach Rich Parker. “You know when you’ve got him because he’s better than everyone else by a mile, but he doesn’t act like it. It’s been a pleasure to coach this kid.” 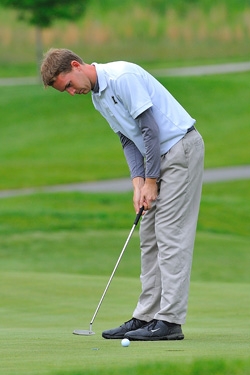 Peter Williamson ’12 will compete in the NCAA Division I Men’s Golf Championship Regional in Michigan from May 17 to 19. (photo by Tim Cowie)

“This kid” is Peter Williamson ’12, who Parker calls “arguably the best player who ever played in the Ivy League.” When Williamson won the Ivy League Golf Championships by eight strokes earlier this month, shooting rounds of 73-69-71, he became just the second golfer in Ivy League history to win the individual title three times. He was voted Ivy League Player of the Year for the third time and became the ninth player in the history of the Ancient Eight to be named First Team All-Ivy four times. He also nearly led Dartmouth to its first Ivy League team championship since 1983, but the Big Green ultimately fell to the University of Pennsylvania on the third playoff hole. As Golfweek noted in a February article on Williamson, he “has made Dartmouth [golf] noteworthy,” which the Hanover, N.H., native says was his goal all along.

Williamson, who tees off Thursday in the NCAA Division I Men’s Golf Championship Regional in Ann Arbor, Mich., says, “My main athletic goal coming into Dartmouth was to help advance the golf program. I’m a process-oriented person, so each week marked another opportunity to play better, help teammates more, and build additional relationships in order to assemble the best team going forward. I have implemented that strategy for four years, and it’s no different for NCAA Regionals this week.” 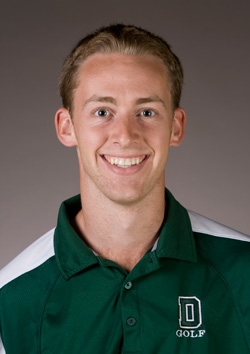 The recent rainy weather has hindered his preparation for the NCAAs somewhat, and he’s also the only golfer in his regional bracket whose academic year hasn’t ended. But between rain, classes, and studying as he completes a studio art major (with a concentration in architecture) and a geography minor, Williamson has gotten in some practice time at the Hanover Country Club. And just as in the winter, he’s been able to work on his fundamentals indoors, thanks to Dartmouth’s two-year-old indoor practice facility in Leverone Fieldhouse. As Golfweek pointed out, Williamson also hits 800 putts a night on a putting matt in his New Hampshire Hall room to stay sharp.

“Spring always challenges the balance between academics, athletics, and extracurriculars,” says Williamson, who’s a member of the Student-Athlete Advisory Committee, Athletes United, Beta Alpha Omega fraternity, and volunteers with Thetford (Vermont) Mentors. “When I have an hour or two, I’ll try to jump out and play a few holes to prepare for a tournament environment. I’ve found that’s the most effective practice regimen given my current schedule.”

Should Williamson win his 10-player NCAA Regional on May 19, he will move on to the national championship, which starts May 29 at the Riviera Country Club near Los Angeles, Calif. But regardless of what happens, he looks back on his Dartmouth career with pride. “We’ve made some big strides as a team, and we continue to pull in better and better players,” says Williamson. “Our coach puts all the pieces together and keeps everything in perspective. We have so much fun, and coach facilitates the whole team dynamic. Coach is quite the player as well, so he can teach the game by example, which earns him a lot of respect on and off the course.”

He continues, “It’s been a great year and career individually, but I’d trade an individual title for a team [Ivy] title any day of the week. We were painfully close this year. Hopefully the younger guys will take something positive out of this year and use the experience for the next chance they get at the Ivy title.”

While Williamson says “Dartmouth has been a fantastic four years,” he acknowledges that he’s “ready to move on and start the next chapter.” The next chapter includes a full summer slate of amateur tournaments, including one that starts four days after Commencement, as he attempts to qualify for the U.S. Open and the U.S. Amateur. He also plans to move to Florida this fall and will probably turn pro then, prior to entering the PGA Tour Qualifying Tournament. Known as Q-School, this is where players earn their PGA Tour card. As a former professional player himself, what is Parker’s prognosis for Williamson’s success?

“If he doesn’t make it as a professional golfer there will be some kind of Congressional inquiry,” jokes Parker, adding that he plans to caddy for Williamson in the Masters someday. “I just think he’s going to get better. He may have to change his grip a little bit to get more power, but the kid averaged under 71 for four years. He has the short game, he has the desire, he has the time, and he has the resources. It’s really up to him. But I would look for us to get to watch him on TV, quite honestly.”