The Sherman Fairchild Professor of the Humanities will receive the Archaeological Institute of America’s Gold Medal in 2013. 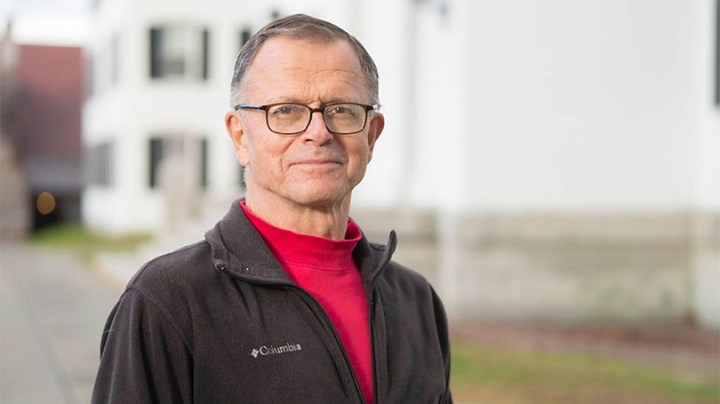 Professor Jeremy Rutter, who began teaching at Dartmouth in 1976, will receive the Gold Medal Award at the Archaeological Institute of America’s annual meeting in January. (Photo by Eli Burakian ’00)
6/21/2012
Body

In recognition of his achievements as a researcher and teacher, Jeremy Rutter, the Sherman Fairchild Professor of the Humanities and professor of classics, will receive the Archaeological Institute of America’s Gold Medal in 2013. The Gold Medal award is presented annually, “in recognition of a scholar who has made distinguished contributions to archaeology through his or her fieldwork, publications, and/or teaching.” Describing his surprise in being informed of the award, Rutter says, “It's a dream come true."

Rutter’s career as an archeologist began at a young age. “I started digging holes in my backyard at the age of 6 in places such as Takoma Park, Md., London, England, and Accra, Ghana, trying to recreate the underground hideout of James Barrie's Peter Pan and the Lost Boys,” says Rutter. “My father was a Foreign Service Officer who served in a number of European embassies between 1948 and 1967, so I was exposed to a lot of history, ruins, and foreign languages as a schoolboy that eventually determined my choice of profession.”

Rutter's formal academic career spans five decades, beginning with the publication of his first scholarly article in 1967, while he was still an undergraduate at Haverford College. Having decided to pursue graduate work in archaeology after majoring in classics, Rutter initially went to work in Italy, but moved to Greece in 1972 after completing two years of service in the Army during the Viet Nam war era. He has devoted most of his academic career to excavations of Bronze Age sites in Greece where he is best known for his studies of the pottery produced by the Minoan and Mycenaean civilizations. After 15 years spent at a number of different Peloponnesian sites on the southern Greek mainland, he was invited in 1991 to oversee the study of the prehistoric pottery from the excavations at the major Minoan port of Kommos on the south-central Cretan coast.

In 2004, Rutter returned to the central Greek mainland to take on the pottery from Mitrou, a site north of Athens. This fall, he will go to work for the first time in the northern Peloponnesian province of Achaia, to collaborate with an Austrian team at a site called Aigeira. “Every one of these sites has its own story to tell, with unusual finds made there and only there,” he says.

Rutter, who began teaching at Dartmouth in 1976, will receive the Gold Medal Award at the Archaeological Institute of America’s annual meeting in January 2013, in Seattle, Wash.