Professor Donald Pease chronicles the life and legacy of Theodore Geisel, Class of 1925—aka Dr. Seuss. 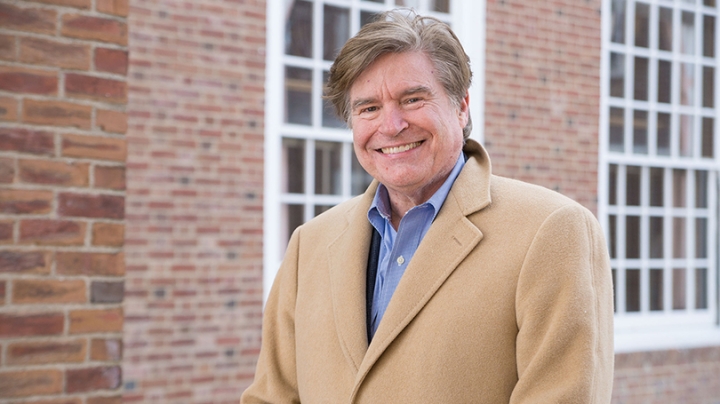 Editor’s note: Dr. Seuss biographer Donald Pease is among those who delighted in the July 27, 2015, release of What Pet Should I Get?, a new book by beloved children’s author Theodor Geisel, Class of 1925. Prior to the book’s release, Pease, the Ted and Helen Geisel Third Century Professor in the Humanities, discussed the book with WPTZ, The Conversation, and other media outlets.

When you write a biography about the creator of The Cat in the Hat and Thidwick the Big-Hearted Moose, be prepared for pushback from the critics: the children for whom Dr. Seuss (Theodor Geisel, Class of 1925) is an icon and a hero.

“If you’re going to write about a figure who is beloved by so many kids, then it’s part of your responsibility to respond to their questions,” says Don Pease, the Ted and Helen Geisel Third Century Professor in the Humanities.

That’s what Don Pease, the Ted and Helen Geisel Third Century Professor in the Humanities, discovered when he published Theodor SEUSS Geisel (Oxford 2010), chronicling the life of the children’s author. Since the book came out, dozens of school-age children have sought out Pease for answers about Seuss’s life and legacy—and to defend their interpretations of his work.

“I wrote that I thought The Cat in the Hat was an allegory of reading personified,” Pease says. “And they said, not their Cat! I acknowledged that my interpretation was a violation of proprieties—though I said that I also see other readings possible.”

Pease takes his role as a public intellectual seriously, regularly arranging phone and Skype interviews with students of all ages from around the country. “If you’re going to write about a figure who is beloved by so many kids, then it’s part of your responsibility to respond to their questions. Because you’re really in their world, on their turf.”

Seuss, Pease says, “belongs to them, and they take him very close to their hearts. They want to know as much about him as they can, but they also want to make certain that you know that they are his legacy, his guardians. They secure the truth of Dr. Seuss.”

Geisel himself was “very awkward around children,” says Pease. “He had a kind of agoraphobia, and he was so much himself a child that he couldn’t deal with other children.” Growing up the son of German immigrants during the First World War, the boy who would grow up to be Seuss was bullied by other kids in his Springfield, Mass., neighborhood. “They would scream, ‘Let’s get the Kaiser’s kid, let’s kill the drunken Hun,’ and throw brickbats at him,” Pease says. “So there’s a way in which the children’s books are a defense—a displacement of their aggression against him. A lot of his books have as a primary theme the defusing of a potentially aggressive situation.”

Recently, Pease has been fielding a number of requests from high school students participating in the National History Day Contest. Many are interested in the legacy of The Lorax, a work that has had a profound influence on the environmental movement. (“Unhappily a lot of them associate the Once-ler’s behavior with teachers in general,” says Pease, referring to the cranky character who charges esoteric fees in exchange for telling the story of the Lorax.)

Younger students, Pease says, tend to be more interested in how the people in Geisel’s life influenced his work. “They want to know about how Geisel’s wife Audrey changed his mood when he was depressed after the death of his first wife, Helen—suggesting that he change his work from primary colors to pastels,” he says. “They’re also interested in the fact that Audrey, unlike Ted, was savvy about business. Ted could not balance a checkbook, but Audrey turned that estate into a world-class enterprise.”

Some students are shy about talking to a college professor. “You have to break the ice,” Pease says. “Younger kids are tentative until they get to what they really love. Then the mood changes, because when they get into their commitment to Dr. Seuss—the whole imaginative world that he’s enabled them to construct, the waking dreams that he’s given them access to—I know we’re going to be into some good questions.”

Pease first encountered Dr. Seuss’s work as a young adult, reading to his much-younger sister Sharon. “She always asked me to read her selections from Dr. Seuss, and never tired of it.” He still reads to the children of his nieces and nephews when he visits his extended family in Delaware. The experience, he says, has given him “enormous patience for younger kids wanting to know more about Seuss.”

He also feels a debt to Geisel that goes beyond holding a professorial chair in his name. “The 18-to-21-year-olds I teach at Dartmouth came to love reading because of Dr. Seuss,” he says. “So I owe him.”