Dartmouth named its medical school in honor of Audrey and Theodor Geisel, Class of 1925. 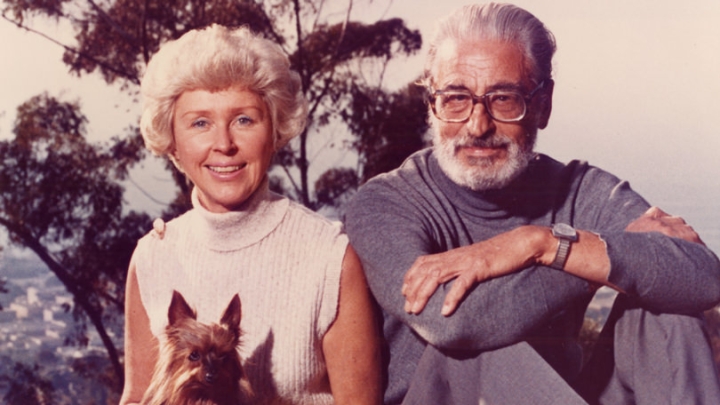 Audrey Geisel, who died Dec. 19, will be remembered by the Dartmouth community as a loyal champion of the College, a nurse, an advocate of children’s literacy, and the wife of beloved children’s book author Theodor Geisel, Class of ’25.

The Dartmouth flag on the Green is lowered today and tomorrow to honor and remember Audrey Geisel.

Audrey and Theodor Geisel were noted friends whose generosity to Dartmouth during their lifetimes and through their estate made the Geisel family significant philanthropists to Dartmouth, resulting in the naming of the medical school in honor of the couple in 2012.

“Ted would be proud to have his name forever connected to one of America’s finest schools of medicine … a school that’s doing much good in the world,” Audrey Geisel said of the April 2012 naming. “Given my background as a nurse, this moving gesture on the part of Dartmouth joins Ted’s great love of his alma mater and my passion of caring for others through the practice of medicine.”

“It is with sorrow that Dartmouth bids farewell to Audrey Geisel. She and Ted have been steadfast and generous in their support of Dartmouth,” says President Philip J. Hanlon ’77.

Audrey Geisel received an honorary doctor of humane letters degree from Dartmouth in 2000. The citation read, in part, “We proudly celebrate your return to a place where we encounter regularly Seussian characters and hats that cats might wear, a place where Green Eggs and Ham are not only part of the literary climate but also are present on the menu for incoming students.”

“(F)ollowing your marriage to Theodor Geisel in 1968, your focus was directed to the works of Dr. Seuss. And what a different you have made—and continue to make. Mr. Geisel himself made abundantly clear your important role in encouraging and enhancing his creativity. You sustained him in the most profoundly productive interval of his long career.”

Duane Compton, dean of the Geisel School of Medicine, says “We are saddened to hear of Audrey Geisel’s passing. As a former nurse, Audrey had a passion for caring for others. The Audrey and Theodor Geisel School of Medicine at Dartmouth is proud to nurture that same passion in new generations of physicians and researchers and to honor two individuals whose work continues to change the world for the better.”

Theodor Geisel, who died in 1991, was given an honorary degree from the College in 1955. In bestowing the honor on Audrey Geisel in 2000, the 75th anniversary of Theodor Geisel’s graduation, the College said she was welcomed into “the Dartmouth fellowship.”

Audrey Geisel served as president of Dr. Seuss Enterprises and oversaw the management of Dr. Seuss-licensed characters. She was the executive producer, alongside Christopher Meledandri ’81, of the adaptation of Horton Hears a Who! in 2008, and supported the creation of the PBS animated series The Cat in the Hat Knows a Lot About That!

She worked with Random House in 2011 to publish The Bippolo Seed and Other Lost Stories, which assembled seven “lost” Dr. Seuss stories originally published in the early 1950s. The publisher referred to the book as “the literary equivalent of buried treasure.” She and Meledandri joined forces again to produce The Lorax, in 2012, and The Grinch, which is in theaters now.