Two of Dartmouth’s own were at the National Magazine Awards Annual Dinner in New York on Feb. 2 to receive honors for their work chronicling the lives of everyday people.

Associate Professor of English Jeff Sharlet won the magazine industry’s top prize for reporting for his story “Inside the Iron Closet,” published in GQ last February. Photojournalist James Nachtwey ’70, currently a provostial fellow at Dartmouth, received the Creative Excellence Award in honor of 30 years of bearing witness to the human cost of war and other disasters, natural and manmade.

In his acceptance speech, Nachtwey described the work of journalists as “moving through the real world in real time, to tell the stories of what happens to people, one by one, at the sharp end of history. We navigate dangers, endure hardships and get our hearts broken by what we witness, over and over again, because we believe that people’s opinions matter—that our society cannot function properly without the information we provide and without the stories we tell.” 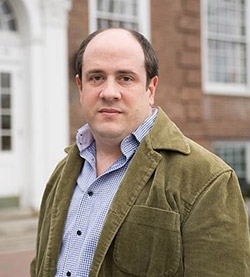 “I was really not expecting to win,” says Sharlet, whose account of gay life in Putin’s Russia was chosen from a pool of seven finalists. Among these were Patrick Radden Keefe’s New Yorker piece on the capture of a Mexican drug lord; Ben Birman and Amor Tibon’s report on the Israeli-Palestinian peace talks, published in The New Republic; and David Bernstein and Noah Isackson’s two-part investigation of Chicago’s crime rate for Chicago.

Sharlet’s plan—to drive from Hanover to New York on Monday for the ceremony and drive back in time to teach his 10 a.m. class on Tuesday—was derailed by his surprise success. (Speaking to Dartmouth Now from the road, Sharlet said he was expecting to hold his 2 p.m. class as scheduled.)

Known as the “Ellies” after the physical award, a reproduction of an Alexander Calder elephant, the National Magazine Awards, sponsored by the American Society of Magazine Editors in association with the Columbia University Graduate School of Journalism, carry the highest prestige in the industry. “There are Pulitzers for newspaper journalism and the National Magazine Award for magazines,” says Sharlet. 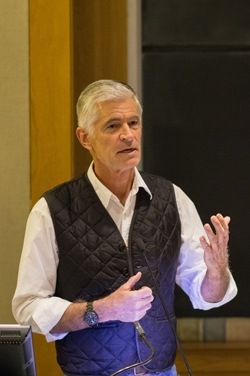 He says he was gratified to receive the Ellie for a story that focused on the lives of Russian people in the gay community—and that his editors at GQ had encouraged this approach. Other reporters had been paying attention to the issue of Russia’s crackdown on gay rights, he says. “But we didn’t go and talk to the most powerful people, to the politicians and the sources, and have, you know, a back and forth. We went and talked to ordinary people trying to make their lives. It’s sort of splendid to have recognized this kind of narrative, where reporting is finding out how ordinary people live.”

Of writing about regular lives, he says, “That’s what I try to teach in the Dartmouth classroom. I’m not trying to teach Dartmouth students how to be interviewing presidents—God forbid, how dull.”

Students in his undergraduate writing courses created an online journal, 40 Towns, to publish their work about the lives of residents of the Upper Valley region around Hanover.

The power of showing the lives of ordinary people was also reflected as Nachtwey received his lifetime achievement award during a presentation that included a slideshow of his photography and a video about his career.

Nachtwey says he is gratified to have his life’s work recognized. “To receive that level of recognition from such an eminent group of editors was truly meaningful,“ he wrote in an email. ”But it’s the combined work of all the journalists who have committed themselves to covering conflicts and social issues that builds the critical mass of information and insight that makes change possible and helps make the world a better place. It’s an honor and a privilege to be one of them.“

Sharlet describes the scene as Nachtwey received his award: “You’re sitting in that hall in Midtown and Times Square with all the glittering magazine editors. Here’s Anna Wintour from Vogue”—which won magazine of the year—“and then there’s this slideshow of the work of a guy who’s borne witness to suffering on a scale that very few other human beings can even imagine—again, of ordinary people. It was a powerful moment in the room.”

Nachtwey spent the 2012–13 academic year at Dartmouth as the inaugural Roth Distinguished Visiting Scholar. The College awarded him an honorary degree in 2010, and he was in residence at the John Sloan Dickey Center for International Understanding during the spring 2012 term as the Class of 1950 Senior Foreign Affairs Fellow.

Sharlet is a contributing editor for Harpers Magazine, Rolling Stone, and Virginia Quarterly Review. His books include The Family, C Street, and Sweet Heaven When I Die.