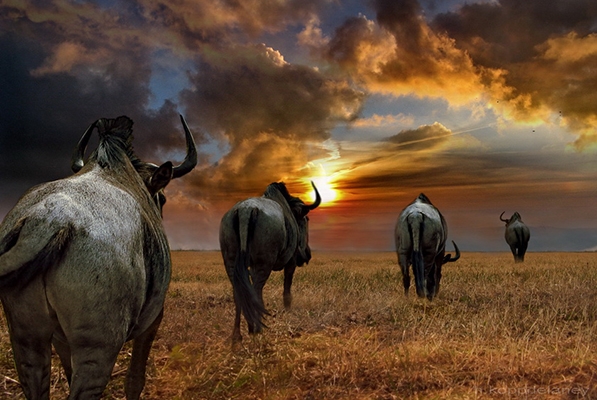 The annual wildebeest migration in East Africa is one of the largest and longest-distance mammal migrations on Earth. (Photo by koppdelaney via Foter.com / CC BY-ND)

“A lot of people didn’t think tracking hundreds, let alone thousands, of individual wildebeest was possible, but we managed with Wild-ID,” says lead author Tom Morrison, who conducted the wildebeest study as part of his PhD in Dartmouth’s Ecology and Evolutionary Biology program. Morrison is now a research associate at the University of Glasgow, studying Tanzania’s other well-known wildebeest migration, in Serengeti National Park. The findings appear in the journal Biological Conservation.

“The Wild-ID technique not only provided an understanding of population size, but importantly, it also allowed us to know the movement and migration patterns of individual animals over time. Together, this information provides a basis for predicting the future prospects of this wildebeest population,” Morrison says.

The annual wildebeest migration in East Africa is one of the largest and longest-distance mammal migrations on Earth. An estimated 1.3 million wildebeest travel between protected areas in Tanzania and Kenya to coincide with the seasonal patterns of rainfall and grass growth. Wildlife migration requires large, connected landscapes and access to seasonally available resources, but human development—such as roads, livestock fences, farms, suburban settlements and energy infrastructure—has fragmented migration corridors in many terrestrial ecosystems around the world.

In eastern and southern Africa, habitat fragmentation has coincided with widespread declines in the abundance and geographic range of ungulate populations. As the number and permeability of migration routes decrease, migratory animals have fewer foraging options. In northern Tanzania, migratory wildebeest in the Tarangire-Manyara ecosystem, a savanna-woodland ecosystem that supports one of the most diverse communities of migratory ungulates in the world, have experienced a gradual loss of connectivity between seasonal ranges and undergone fluctuations in abundance over time. Similar patterns have played out elsewhere in Africa.

Typically, wildlife biologists monitor large mammal populations by counting them from the air or attaching expensive GPS collars. Wildebeest censuses are commonly conducted using sample-based aerial surveys, although the dense clumping of herds leads to low precision. So, the Dartmouth-led team used an unusual computer-assisted photographic capture-mark-recapture method to examine the link between wildebeest abundance and their ability to freely move within the Tarangire-Manyara ecosystem.

Wildlife photo-recognition software has been used for years to identify and track species with unique spotted or striped markings such as cheetahs and zebras, but similar software was ineffective for species whose coat or skin patterns are irregular in size, shape and edges, such as giraffes and wildebeest.

Then, in 2011, Dartmouth scientists developed “Wild-ID,” an irregular pattern-matching algorithm that has proven highly accurate—its error rate is virtually zero for giraffes and about 8 percent for wildebeest.

In studies since then by Dartmouth scientists and others on a growing variety of wildlife, Wild-ID has proven to be more accurate, less invasive, less expensive, less time consuming, and cover more territory than traditional mark-recapture and aerial survey methods. And Wild-ID is so accurate on giraffes that Dartmouth researchers no longer need to physically capture and tag them as they conduct the largest ever study of giraffes and one of the largest ever individually based demography studies of a large mammal.

In their new study, Morrison and his colleagues found that as the number of migration routes declined in this Tanzanian ecosystem, so, too, has the population size of wildebeest, although the current population appears relatively stable in size despite rapid declines in the past.

The results don’t definitively link trends in wildebeest abundance with changes in land-use and wildlife harvesting, but the current geographic extent and population size of wildebeest in the Tarangire-Manyara ecosystem are vastly smaller than in studies from recent decades.

“What was probably once a population of tens of thousands of animals now numbers roughly 10,000 despite a landscape that rivals the Serengeti-Mara ecosystem in total area,” Morrison says. “Recent conservation efforts to protect seasonal habitat and to enforce anti-poaching policies outside protected areas have likely helped stabilize the population, at least temporarily, since the early 2000’s relative to the severe declines observed in the 1990s, but we caution that several key vulnerabilities remain.

“Photo identification of large number of animals using the Wild-ID software can assist scientists who monitor threatened populations,” Morrison adds. “Migratory species require large areas to sustain their populations, and this requirement is a significant challenge in settings that are experiencing rapid human population growth and development such as northern Tanzania. Simply monitoring populations is difficult and expensive in many species, and we offer a new tool for estimating a fundamental metric of population health and linking this to movements of individual animals.”