Pencils and Shrinky Dinks technology are used to detect the presence of gases. 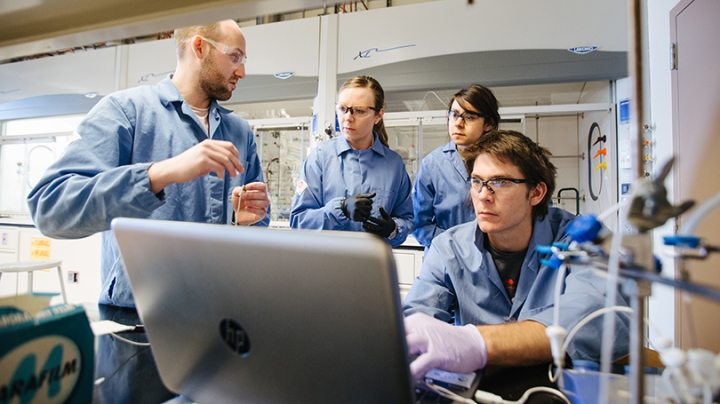 With an unlikely combination of tools—wooden pencils and a child’s arts-and-crafts kit known as Shrinky Dinks—Assistant Professor of Chemistry Katherine Mirica and her lab team are building an electronic “nose” to detect gases that are beneficial at some levels, but very dangerous at others.

“We are particularly interested in detecting and monitoring gases that may have an impact on health care but can also be environmental pollutants,” Mirica says. The “nose” they are developing is a portable sensing device that will detect the presence of gases.

The particular gases in her sights are nitric oxide, carbon monoxide, and hydrogen sulfide, all normally produced within the human body. In low concentrations, they can play a role in regulating the cardiovascular, neurological, and other life systems. With exposure to atmospheric pollution, or because of a metabolic imbalance, higher concentrations may form in the body. “These gases are essential to life, but if you have too much of them, they will kill you,” she says.

To explain how the device works, Mirica likens it to a human nose.

“When you smell a rose, you are actually sensing a variety of different things that tell you it is a rose—an array of chemical cues,” she says. With the device, “multiple sensors, each tuned to a different component chemical stimulus, must be employed. We ‘train’ this collection of multiple sensors to respond like a nose.”

The first step in her approach to sensor construction is to draw lines with standard pencils—the yellow wooden ones with graphite inside. Graphite conducts electricity, so the lines, which are drawn on a polymer (plastic) film, become their electrodes. This is followed by a process familiar to any child who’s played with Shrinky Dinks.

“Children bake plastic pieces in an oven, shrinking them down into small plastic charms, jewelry, and figurines,” says Mirica. “Similarly, we heat the film, which significantly shrinks the electrodes, allowing us to create miniaturized devices. While Shrinky Dinks works for toys, I do not think it has been previously used for making chemical sensors.”

The first step in building the gas sensor is drawing electrically conductive graphite pencil lines on a polymer film to form the electrodes. (Photo courtesy of Katherine Mirica)

Nanomaterials—Mirica’s specialty—are attached to the electrodes. When voltage is applied, gasses are drawn in and trapped in the nanomaterial. “When this happens, a change in the electrical conductivity of our new sensor tells us a gas is present and what its chemical identity may be,” she says. “When I came across these gases, I realized that no single technology was capable of detecting and monitoring them in real time. That is ultimately what we want to accomplish, and our research in that direction is taking off well.”

Mirica began thinking about gas detection during her postdoctoral time at the Massachusetts Institute of Technology. She was looking for an opportunity where technology could make a big difference in discovering the presence of a gas. Prior to joining Dartmouth, in July 2015, she worked on chemical sensing systems, but none of them were directed specifically at biologically relevant gas detection.

The sensing and detecting of gases are now a major focus in Mirica’s newly renovated laboratory, which bustles with nine full-time researchers—five graduate students and four postdocs. Seven undergraduates also work in the lab, including two from WISP—the Women in Science Project.

When not in the lab, Mirica is teaching. Near the end of her Harvard PhD training, she underwent an epiphany of sorts, realizing that “while I really loved research, I also really loved teaching and decided that I wanted to do both. Now I am able to combine those two passions.”