The honor society recognizes the top grade earners in the next graduating class. 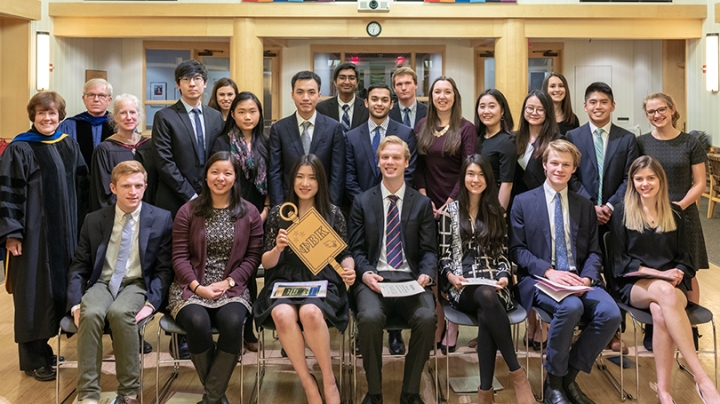 Student inductees join Dartmouth Phi Beta Kappa chapter officers for a photo shoot after the induction ceremony last week. (For a list of names, refer to text below the story. Photo by Lars Blackmore)
10/23/2018
Body

Twenty-one top grade earners from the Class of 2019 were inducted into the nation’s oldest honor society last week at the 231st annual meeting of the Alpha of New Hampshire chapter of Phi Beta Kappa.

After an opening greeting, a reading of the charter, and a proclamation of the intention to induct new members, chapter marshal, classics professor Roberta Stewart, a University of Michigan at Ann Arbor alumna of Phi Beta Kappa, led the inductees to their seats in the front of row at Occom Commons in Goldstein, where some 20 parents, family members, and friends were gathered for the ceremony.

“I now ask you, in words first employed in 1779, and therefore venerable in the usages of our society, to affirm that you will, with all your possible efforts, endeavor to prove true, just, and deeply attached to this, our growing society,” Washburn recited. “And in addition to this ancient pledge, do you affirm that in all your relations you will adhere to the principles of the philosophy which its founders accepted as the inspiration of life, namely, fraternity, morality, and literature?”

With that, and some additional recitation, Washburn instructed the inductees to raise their right hands and answer, “I do.”

The 21 seniors raised their hands in unison and paused. Washburn tilted his head and raised an eyebrow, prompting a chorus of “I dos” and laughter from the inductees and the audience.

Acting chapter vice president Linda Fowler, the Frank J. Reagan Chair in Policy Studies, Emerita, and a Smith College Phi Beta Kappa alumna, instructed those gathered for the ceremony in the history of the Alpha of New Hampshire at Dartmouth College chapter of Phi Beta Kappa. Founded in 1776 at the College of William and Mary to advocate for and recognize excellence in the study of the liberal arts and sciences, the honor society has 286 chapters on college and university campuses and over half a million living members. Dartmouth’s chapter, the fourth oldest in the nation, was established in 1787.

Kate Soule, chapter secretary and a member of the Phi Beta Kappa national governing body, told the students that the criteria for election to Dartmouth’s chapter are rigorous: Students must hold one of the top 20 cumulative grade point averages in their class after completing eight terms within three years of matriculation.

Just before the close of the meeting Soule, director of Arts and Sciences Finance and Research Administration and an Amherst College alumna of Phi Beta Kappa, spoke about the rights, responsibilities, and benefits of membership before teaching the students the secret Phi Beta Kappa handshake.

“There’s a reason that’s a secret handshake, because you’re going to be too embarrassed to do it in public,” said Washburn, drawing a big laugh.

After the ceremony new Phi Beta Kappa member Sonia Qin ’19 said taking part in the ritual was exciting. “Feeling so honored by our professors—that was really special,” she said.

The following students were inducted:

The chapter also awarded the Phi Beta Kappa Sophomore Prize to nine members of the Class of 2020, an honor that recognizes students with the highest grade point average after completion of five terms. These students are not yet members of Phi Beta Kappa but are on track to become members in their senior year.