‘Infinite Receptors’: Enrico Riley ’95 Discusses His Art at the Hood

The professor of studio art delivered the 2019 Dean of the Faculty Diversity Lecture.

Enrico Riley ’95, a professor of studio art, gave the 2019 Dean of the Faculty Diversity Lecture about his recent body of work, “Infinite Receptors.” (Photo by Robert Gill)
4/03/2019
Body

How can visual art expand our understanding of race, gender, and oppression? That’s one of the questions Barbara Will, the A. and R. Newbury Professor of English and associate dean for the faculty of arts and humanities, asked  Enrico Riley ’95 at the Hood Museum of Art on Friday. Their public conversation was the main part of “Talking Points,” the 2019 Dean of the Faculty Diversity Lecture. The lecture series was launched seven years ago to foster a welcoming and inclusive community at Dartmouth. Riley’s presentation was open to all Arts and Sciences staff members.

Following a brief welcome by Elizabeth Smith, dean of the faculty of arts and sciences and the Paul M. Dauten Junior Professor of Biological Sciences, Will introduced Riley to the 30 staffers gathered in the Hood’s Russo Atrium. “He’s a much beloved teacher, and it’s a pleasure to listen to how much students appreciate what he brings to the classroom, including interesting discussions about how art connects to their careers and their lives,” Will said.

After graduating from Dartmouth in 1995 with a BA in visual studies, Riley earned an MFA in painting from the Yale School of Art in 1997. He joined the College faculty in 2001, teaching drawing and painting at all levels, and currently chairs the Department of Studio Art.

Riley’s work has been shown in museums, galleries, and cultural centers throughout the U.S. and Europe. He has a long and distinguished list of awards and honors, including a Guggenheim Fellowship and a Rome Prize.

In the atrium, Riley projected and spoke about paintings from his recent body of work, “Infinite Receptors.” Images include cartoon-like hands and feet, some bound by ropes, others threatened by gun barrels jutting into the picture. No faces are shown on the canvasses.

“The original impetus of the work was in response to many of the police shootings we all were viewing a few years ago,” Riley said. “I found myself thinking about not only the sort of violence involved, but the historical relevance and antecedents to it, and also the conversation within the African American community—though I don’t say  it’s the entire community, because it’s not monolithic—about the idea that these sorts of acts of violence didn’t end with emancipation. These kinds of things have happened throughout time. Seeing all of this information on the nightly news and put into the center of a national conversation, I found myself thinking about this more and more and it prompted a shift in my work.”

The images, he said, are strong and disturbing—one reason he borrows from the visual vocabulary and saturated palette of cartooning, as a way to “soften the images with an aesthetic roundness. All the images have only three fingers, sometimes a thumb—all clear references to animation. There’s a nakedness of the male form, as a signal of vulnerability.” 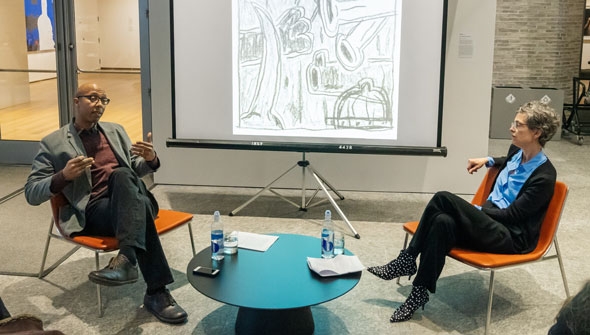 Enrico Riley ’95, a professor of studio art, talks with Barbara Will, the A. and R. Newbury Professor of English, at the Hood Museum of Art during the 2019 Dean of the Faculty Diversity Lecture. (Photo by Eli Burakian ’00)

Will said, “There are so many ways to read your paintings—so many points of entry. How does art help us be more inclusive as a community?”

“I think that human beings want to be seen and want to be heard,” Riley said. “It doesn’t matter what your race or gender is, it’s something we crave. In some ways, art can be a corrective measure, an activity that is an adjunct to normal everyday experience.”

Will, Riley, and Juliette Bianco, deputy director of the Hood, led a brief tour of the second floor of the museum, discussing a few works in relation to the event’s inter-related themes: race and representation, social identity and power, and the intimacy of viewing artwork.