Salman Khan to Class of 2020: Adversity Is a Chance to Grow

“It’s in times of crisis, times when the world is uncertain, that there’s also the biggest opportunities for personal growth and for the society as a whole to grow—and opportunities for young, energetic, optimistic people who have a bias towards action to make a difference,” Khan Academy founder Salman Khan told Dartmouth’s Class of 2020 in a video address streamed today as part of Dartmouth’s virtual degree conferral ceremony, Celebrating the Moment: Dartmouth 2020.

Because of the COVID-19 pandemic, the celebration, which streamed to an audience of graduates and their friends and families, was unlike any other commencement ceremony in Dartmouth’s history—no academic regalia, no honorary degree recipients, and no need for sunscreen or umbrellas.

But the business of the day was the same: to confer bachelor’s, master’s, and doctoral degrees on students completing undergraduate programs and graduate programs at the Geisel School of Medicine, Guarini School of Graduate and Advanced Studies, Thayer School of Engineering, and the Tuck School of Business—this year, 1,914 degrees in total. 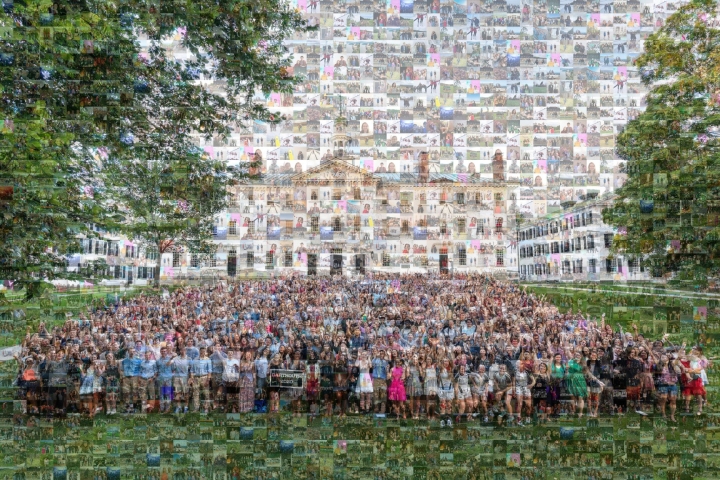 This mosaic was created from images submitted by members of the Class of 2020 and arranged to recreate their first-year class portrait. See the full version and download it.

And although the graduates could not march across a Green crowded with well-wishers, the broadcast began with a prelude featuring video of Dartmouth images and people, interspersed with clips from commencement speakers from years past, including Fred Rogers ’50, Shonda Rhimes ’91, Jake Tapper ’91, Mindy Kaling ’01, and Yo-Yo Ma. The main event featured greetings to the graduates from faculty and staff; congratulatory messages from friends and family scrolling to a soundtrack of the Alma Mater, recorded by Dartmouth bagpiper Joshua Marks ’96, who has led every commencement procession since his own in 1996; and a welcome from Provost Joseph Helble, who said that until Dartmouth is able to welcome the graduates back to campus, “know that we all, all of us in the Dartmouth community, will always be with you and will always be a part of you.”

Co-presidents of Native Americans at Dartmouth Elsa Armstrong ’20, a member of the Red Cliff Band of Lake Superior Ojibwe, and Onaleece Colegrove ’20, a member of the Hoopa Valley Tribe, offered welcoming remarks, saying that “on the homelands of the Abenaki people, we are lucky to have had the privilege to have learned from one another.”

Rabbi Daveen Litwin, dean and chaplain of the William Jewett Tucker Center for Spiritual and Ethical Life, offered a formal invocation. The gospel choir and glee club sang, accompanied by the wind ensemble.

In his address, Khan—whose nonprofit education organization provides free online courses to more than 20 million learners worldwide—likened today’s crises to the challenges faced by the Class of 2020’s great-grandparents, who lived through the Great Depression and World War II and became known as the “Greatest Generation.”

“They came home and were the foundation of the prosperity and innovation—and actually a lot of the social progress—that we saw in the second half of the 20th century,” Khan said. “And I don’t think it’s a coincidence that they came of age during times of adversity, and you are coming of age during a time of adversity.”

If today’s graduates put their energy toward positive change, Khan said, “You have a chance of being another Greatest Generation.”

Khan shared his method for figuring out what really matters in life: He asked the graduates to imagine themselves 50 years in the future, reflecting back on their accomplishments and regrets. What would happen, he asked, if in that future a genie offered their 70-year-old selves “a second chance” to go back in time to this moment, in 2020?

“You’re sitting there watching this guy with a bad haircut give you this somewhat strange speech,” Khan said. “And you realize, ‘Wait, the genie did what they said they were going to do—I am now 50 years younger, it’s 2020, I’m graduating from Dartmouth, and all of those regrets, I can redo.’ ”

He continued: “Let me just say how excited I am to see what you—what I believe is going to be the next Greatest Generation, the Dartmouth Class of 2020—what you’re going to do with your second chance.”

President Philip J. Hanlon ’77, who recorded his message from outside the president’s house on Webster Avenue, told graduates, “You may be physically distanced from one another today, but no distance can diminish the bonds you’ve forged at Dartmouth over these last four years.”

Hanlon said that this past spring has seen “the gravest of threats to our American ideals that we have ever experienced”—from the global pandemic and the ensuing economic recession to “the senseless murders of George Floyd, Breonna Taylor, and Ahmaud Arbery—manifestations of the bigotry, hate, and systemic racism that continue to plague our nation and are yet again tearing our nation apart.”

“But this is not a moment of despair,” Hanlon said. “Instead, it is a moment to ask yourselves, ‘What can I do to restore unity to our nation? How can I help the most vulnerable among us and put an end to discrimination and inequality, once and for all? What knowledge can I apply to improving the human condition?’

In her address, biology major Emma Esterman ’20—one of six valedictorians this year who earned cumulative grade point averages of 4.0—called for her fellow graduates to ”use our creativity, intelligence, and empathy to create a new normal that is more equitable to each other and to our planet.“

Citing the impact of a Dartmouth faculty mentor on her own life, she spoke about the power of becoming a mentor. ”The best way to lift each other up is to meet people exactly where they are without judgment and to offer them your time, your actions, your respect, and your willingness to listen.“

At a streamed multifaith baccalaureate service earlier in the day, Harvard epidemiologist Michael Mina ’06 spoke on ”The Benefits of Existing in a Time of Great Uncertainty,“ calling the ”great uncertainty and instability“ facing the world today ”an opportunity to seize change—whether that’s change across the globe as we’re seeing with the protests on the streets surrounding George Floyd, or change within your own life.“

He continued: ”The silver lining of this pandemic and of George Floyd’s senseless death, is that these events have exposed the dire need for change. Who better to make that change than all of you?“