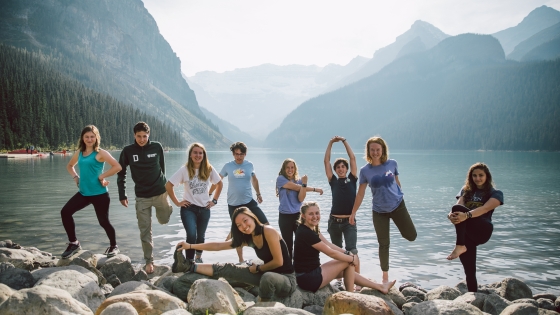 “Whoa—that is so cool!” exclaims Whitaker Fanestil ’20 as he reads waveforms scrolling across an oscilloscope monitor that is collecting radio echo-sounding data that measure the depth and shape of the Athabasca Glacier, where he and his classmates are standing.

“We talked about this exact same thing in class, and it’s so cool to see where these numbers are coming from and how these waves look in real life, with all this other noise,” he says. 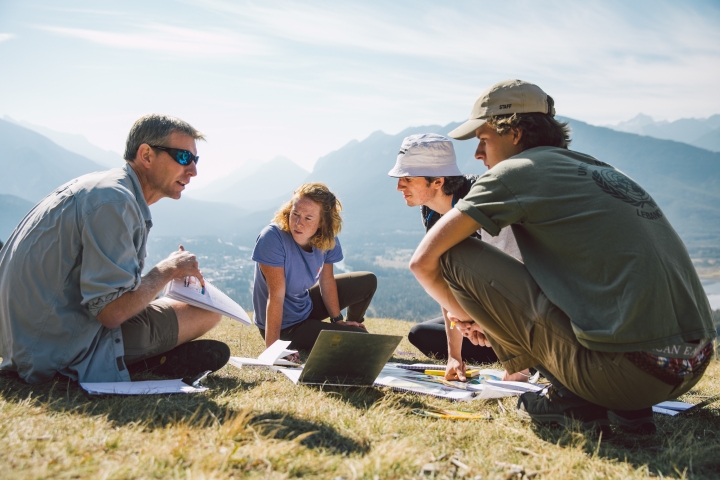 ‘Simple Surveying Techniques and a Bit of Math’

It is Day 2 of the Stretch—the first day on the Athabasca, a small mountain glacier flowing down from the Columbia Icefield in Jasper National Park—and already Fanestil and the other “Stretchies” are beginning to understand that standing on a glacier gathering data first-hand is worlds away from slideshows, lectures, and textbooks.

“What I’ve seen in the past few days is more than I see in an entire term sometimes,” says Berit DeGrandpre ’20, an anthropology major from Charlo, Mont.

Glaciologist Robert Hawley, who is co-leading this segment with his colleague climatologist Erich Osterberg, says this is why the Stretch matters.

“We spend a lot of time in glaciology class deriving the equations for how a glacier moves,” says Hawley, who is, like Osterberg, an associate professor of earth sciences. “Now they can see and experience a glacier and make actual measurements on the ice. They can’t get that in a classroom.”

That makes sense to Rachel Rubin ’20, who took Hawley’s glaciology class last spring. “While I found it really interesting, it all seemed so abstract,” she says. “Now that I’m here, I can see all the formations we talked about, and I can gather the data myself. It brings it closer to home. This is what glaciology really is—being out in the field and looking at glaciers. You really can’t get the sense of it in the classroom.”

In addition to learning about radio echo soundings, the students are seeing how much lower-tech methods can tell them about things like the velocity and thickness of the glacier.

“There are lots of new high-tech instruments that geophysicists use to make measurements on glaciers. It’s easy to go straight to those high-tech instruments, but the science behind them can get lost in all of the button pushing,” Hawley says. “So I like to bring it back to the basics. We start with simple surveying techniques and a bit of math.” 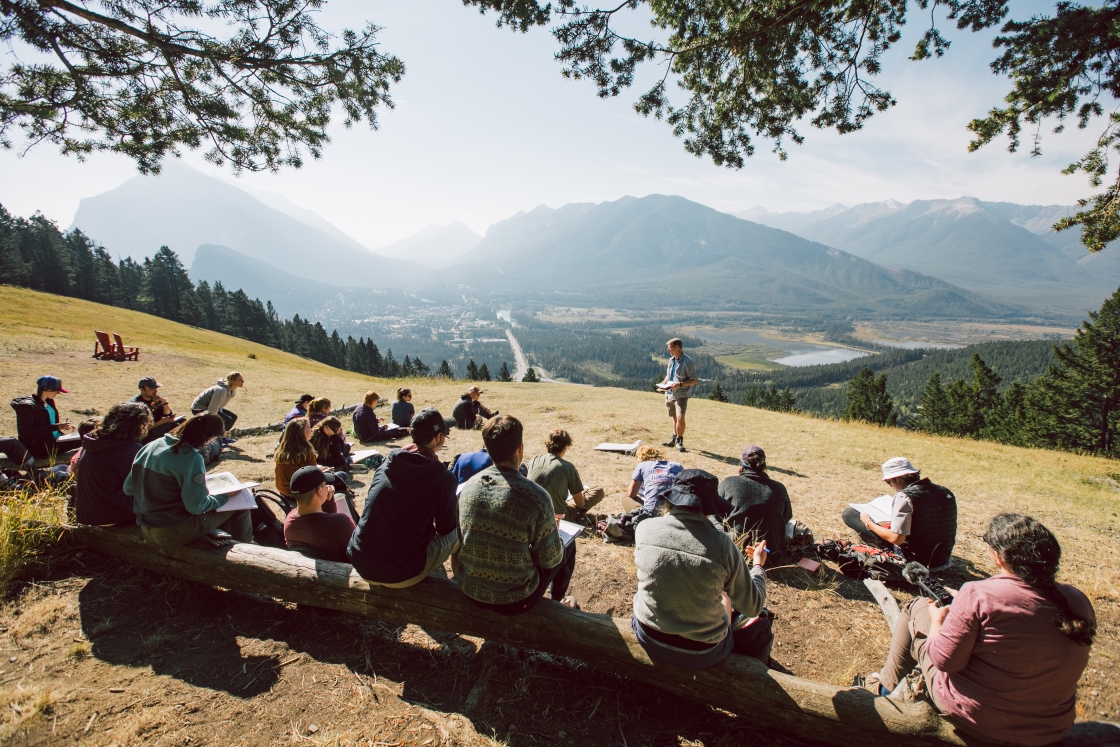 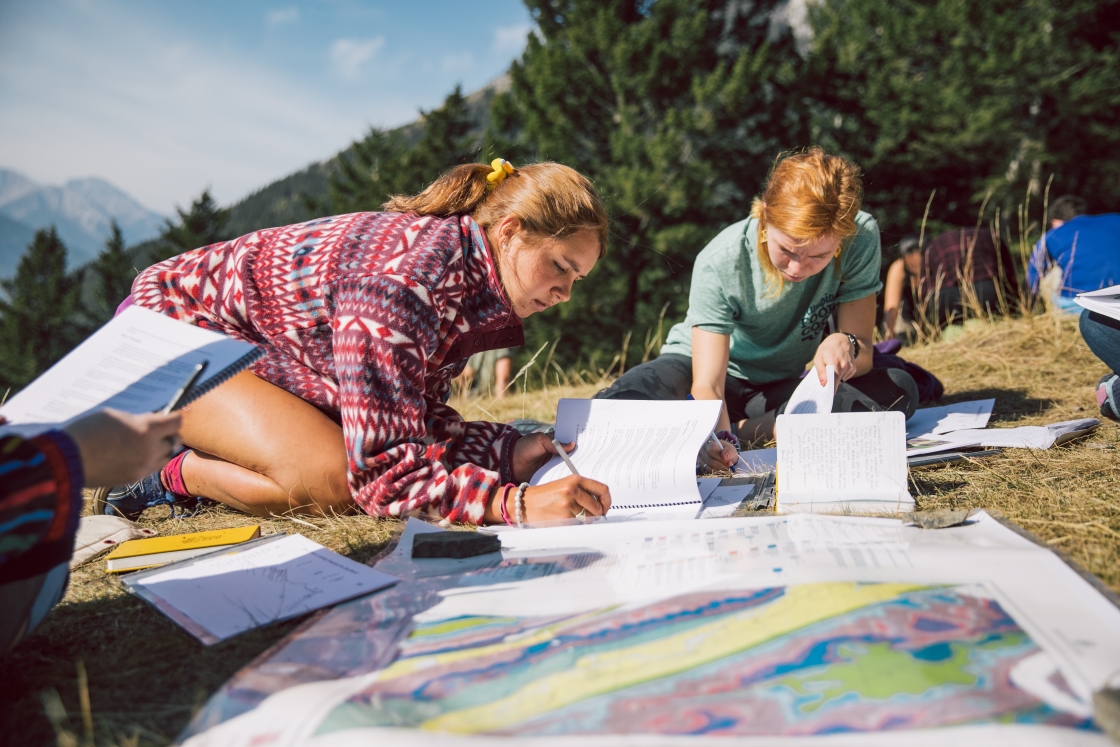 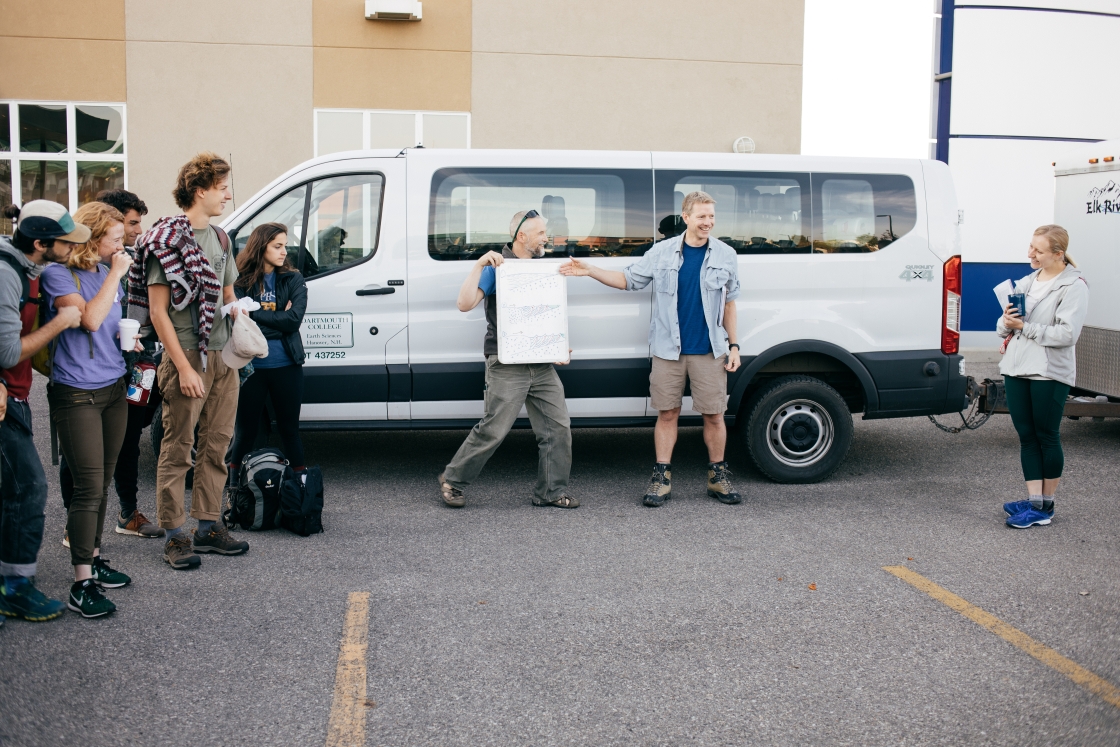 Caption
Day 1: Professors Hawley, left, and Osterberg explain the formation of the Canadian Rockies in the parking lot of the Holiday Inn in Calgary, Alberta. (Photo by Robert Gill)
Image 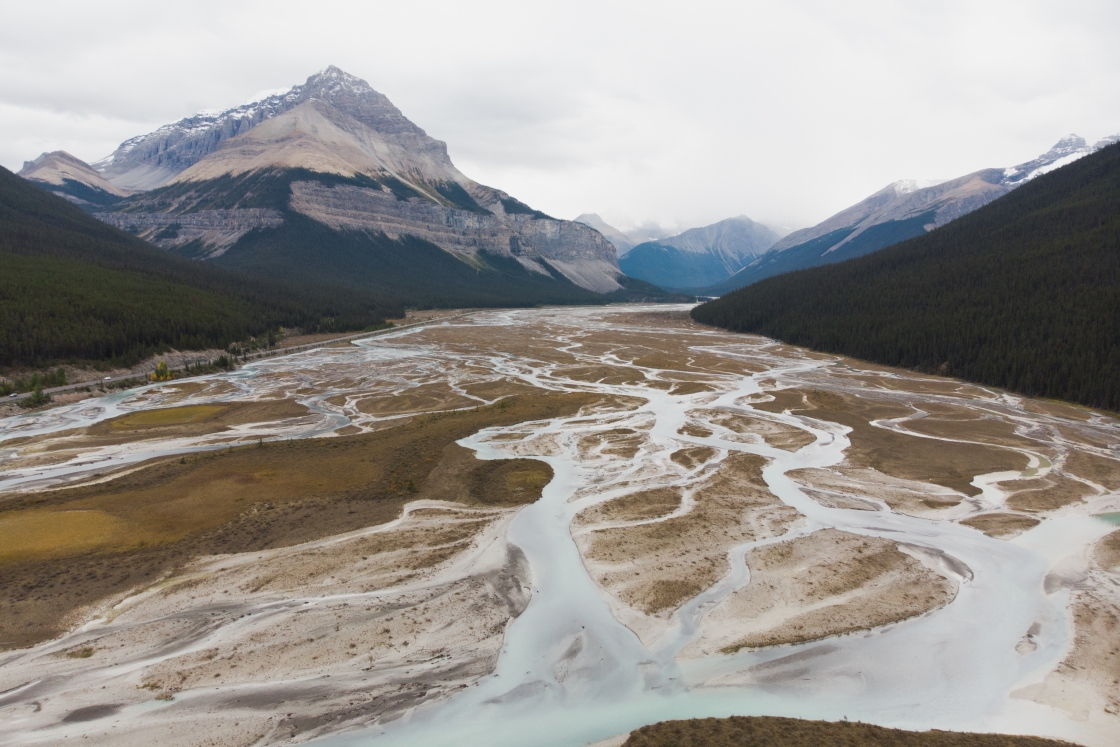 Two days earlier, the students, who spent the summer taking the required “Earth Sciences 40” course to learn mineralogy and structural geology for the Stretch, gather at a Holiday Inn in Calgary, Alberta, for their first night together as Stretchies.

They are met by Osterberg and Hawley and two graduate student teaching assistants who have spent three weeks driving from Hanover in Stretch vans loaded with camping gear and research equipment for the entire term. Over piped-in music in the hotel’s dining room, which they have commandeered for an orientation session, Hawley tells the students, “You guys all came in as individuals, and you are now a group.”

And being part of a group of this size and with such a complex itinerary means being on “expedition behavior”—thinking more conscientiously about courtesy, safety, and preparation than they might if they were traveling alone. “When you bump it up a notch, it makes the whole expedition go smoother,” he says.

At 8 the next morning, the group meets in the hotel parking lot to talk about the day’s goals before setting off across the plains into the Canadian Rockies—a drive Osterberg describes as “one of the most spectacular I’ve ever experienced.” 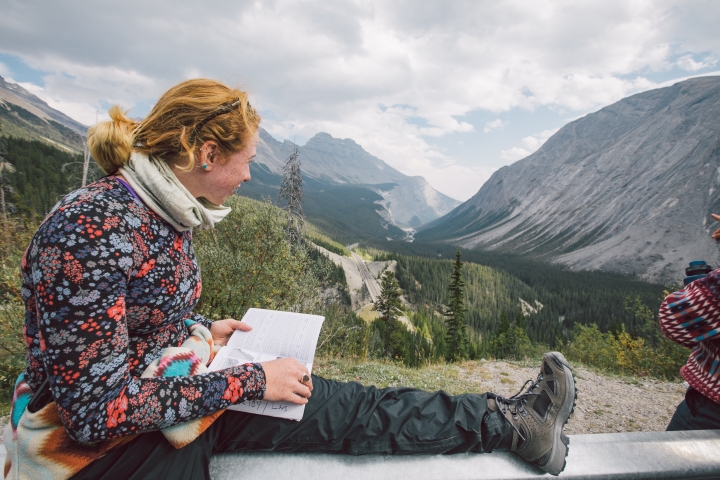 Berit DeGrandpre ’20 looks out across a glacial valley. (Photo by Robert Gill)

The drive includes a full day’s worth of learning, punctuated by radio conversation between the vans as the professors and TAs point out interesting geological features in the landscape. During a stop at an overlook on Mount Norquay, above the village of Banff, the students draw geological cross-sections of the mountains surrounding the Bow Valley.

In the afternoon, the TAs give a crash course on using a Brunton—the geologist’s equivalent to a Swiss Army knife, combining compass, clinometer, and level—and how to take notes in the field. After a scramble down a steep slope, the students put their new skills to work examining hoodoos—strange, tower-like formations of eroded sedimentary rock whose origins are at the center of a scientific debate.

Dinner is takeout pizza on the banks of Lake Louise. Then the students pile back into the vans for the ride deeper into the Rockies and the wilderness hostel that will be their home for the next several days as they explore the Athabasca Glacier.

Though they will be with the students through only the first segment of the Stretch, Hawley and Osterberg are very conscious that these first days are foundational for the entire nine-week journey from Alberta to Arizona.

“From the first moment they land at the airport, we’re trying to set the tone, showing them that we’re here to support you, but you have responsibility,” says Osterberg. “You’re representing Dartmouth.” 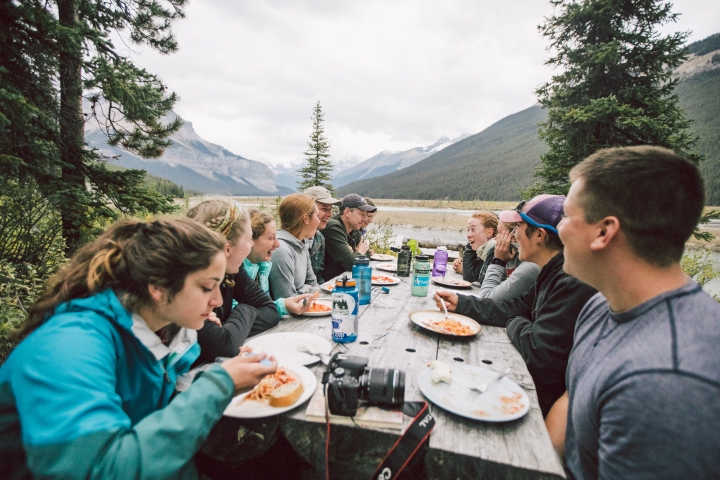 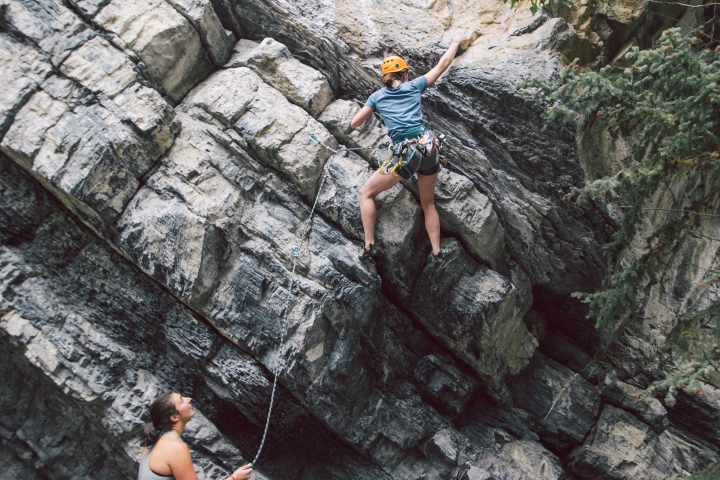 Rebecca Miller ’20 belays Rachel Rubin ’20 as she climbs a rock wall behind the Rampart Creek Hostel. (Photo by Robert Gill)

“This hotel will be your last shower in Canada,” Osterberg tells the Stretchies at the Holiday Inn in Calgary. Bathing options at Rampart Creek Wilderness Hostel in Banff National Park, one of two hostels where the group is staying during this segment, include a wood-fired sauna and an icy stream fed by glacial runoff.

For recreation, there is a small climbing wall and trails. Because this is grizzly bear country, the students are expected to hike in groups of at least two and to limit their running to the main road. The students sleep in bunkhouses, prepare suppers in the communal kitchen, and hang out around the fire pit in the evenings after they complete the day’s homework assignments.

The hostel offers spotty wifi for a couple of hours each night, and each morning the students have access to the internet at the visitors center across the road from the glacier. But for the most part, the Stretchies seem happy to limit their connection with the outside world to small doses.

“This whole first week we don’t have cell phone service,” says Shoshana Geller ’20. “It’s really awesome to get to know everyone without that.”

Science on a Glacier

It’s what a lot of us love about living here: our winters. It’s more than changes to the climate; it’s changes to our livelihood and our culture.

Without the whiff of oxygen reported by a series of earlier studies, the scientific community needs to critically reevaluate its understanding of the first half of Earth’s history.