A Thunderstorm in Dinosaur

It’s past midnight when lightning strikes above Dinosaur National Monument’s Split Mountain Campground, where the Stretchies are—or were—sound asleep alongside the Green River. When the too-close-for-comfort thunder echoes up and down the rock walls of the narrow canyon, it feels like the rain-pummeled tents are levitating.

This is the group’s first night in Utah, and their first night sleeping in tents. They are midway through the Parks segment, wending their way southward from Yellowstone through the Grand Tetons, Dinosaur, Arches, Bryce Canyon, and Zion national parks.

By morning, the storm has passed, leaving some tents surrounded by puddles but otherwise dry. “If we’re going to have a thunderstorm, we’re probably in the safest place, on the canyon floor,” says Professor Carl Renshaw, who has led this segment of the Stretch for the past 20 years.

It promises to be a beautiful, sun-filled day—and, in fact, the day turns out to be one many of the students look back on as a highlight of their entire Stretch. 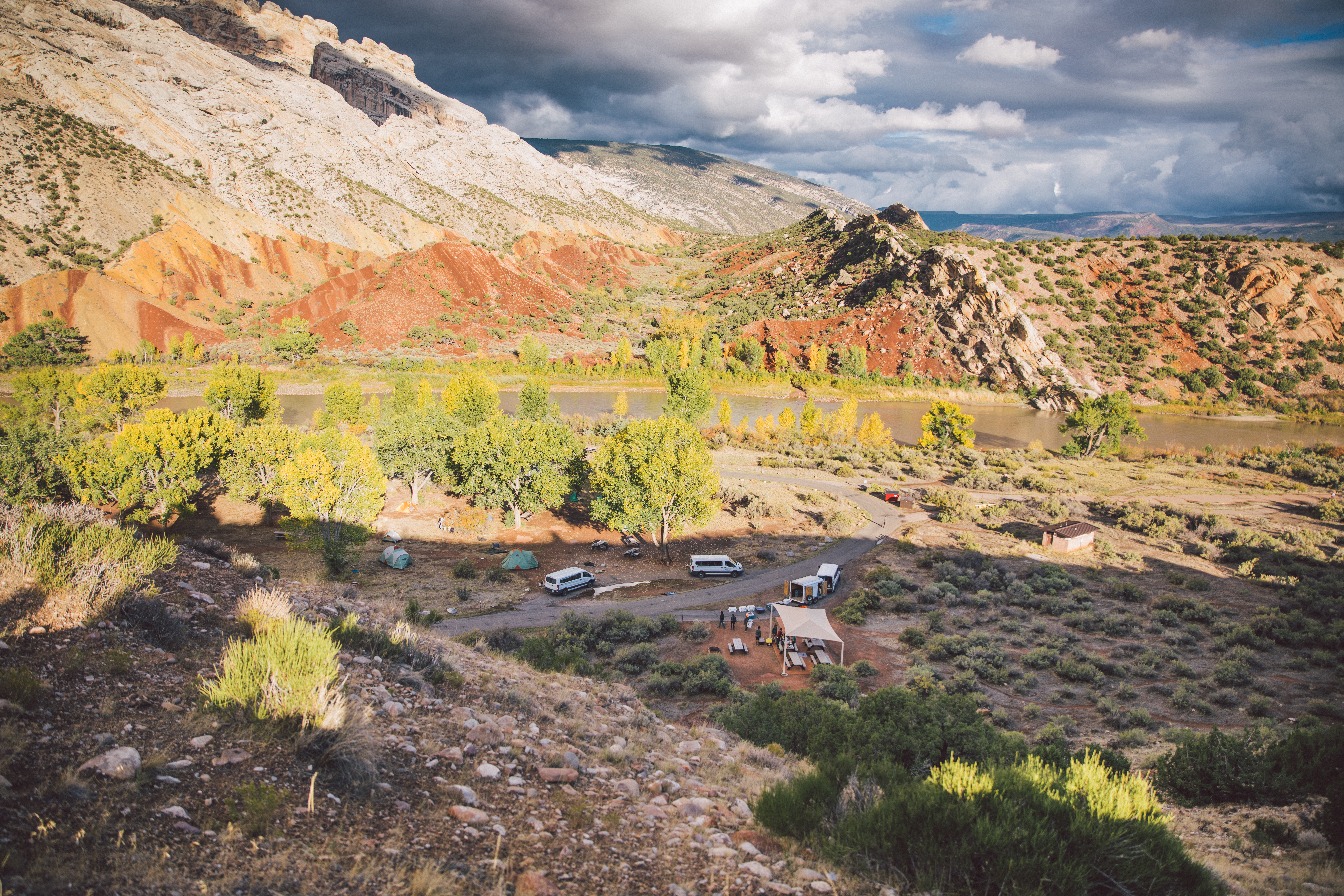 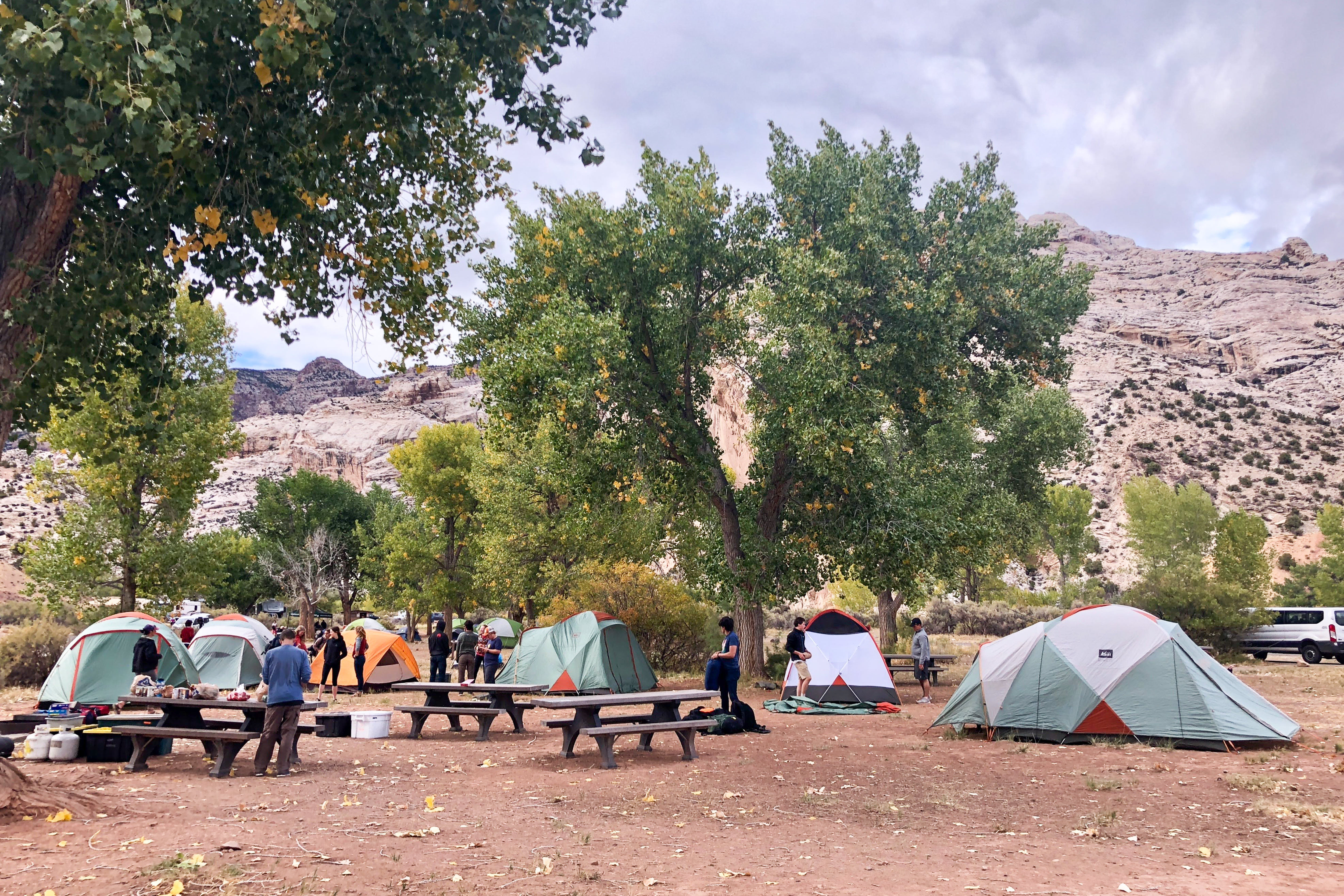 The Split Mountain Campground in Dinosaur National Monument was the Stretchies’ home for three nights. After a night of rain, this site turned to mud. (Photo by Isabel Boettcher ’20)

The Parks segment is about discovering “what each park has to offer,” Professor Carl Renshaw says, which means studying everything from tectonics and geobiology in Yellowstone to how the famous arches in Arches National Park formed. In Dinosaur there are, of course, dinosaur fossils (“not living dinosaurs,” Renshaw clarifies), as well as rivers and the sandstones of an ancient Mesozoic desert.

Even the van rides and days off are learning experiences. On a day off in Moab, some students rent mountain bikes to ride the region’s legendary trails. “We were biking on rocks and over these ancient sand dunes that we had talked about for several weeks,” says Max Bond ’20. “You felt like you knew what was going on with the geology and you could use that knowledge for your riding.”

Zachary Berkow ’20, who is traveling out West for the first time, describes the drive from Yellowstone into the Grand Tetons, where the students practiced mapping a fault scarp. “It was such a wild transition,” he says. “Yellowstone wasn’t the most exciting visually, and then all of a sudden these beautiful massive peaks just shoot up outside of Jackson.”

“We’re learning about what’s around us,” says Kyle Sullivan ’20. “It’s a lot about figuring out what’s different about each location—we move into a new area and try to figure out what’s going on there and how that plays into everything we’re learning overall about the landscape of the western United States.” 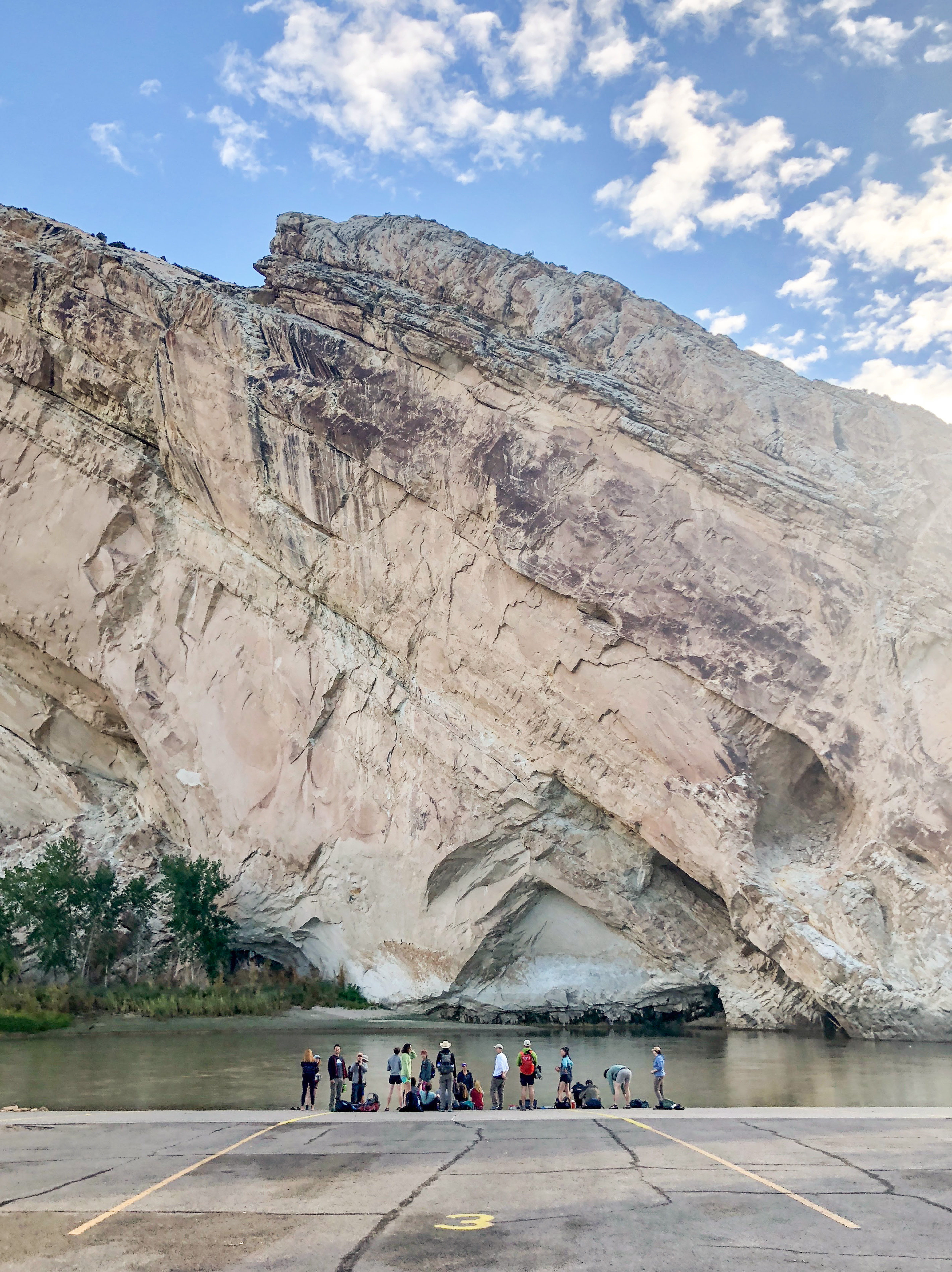 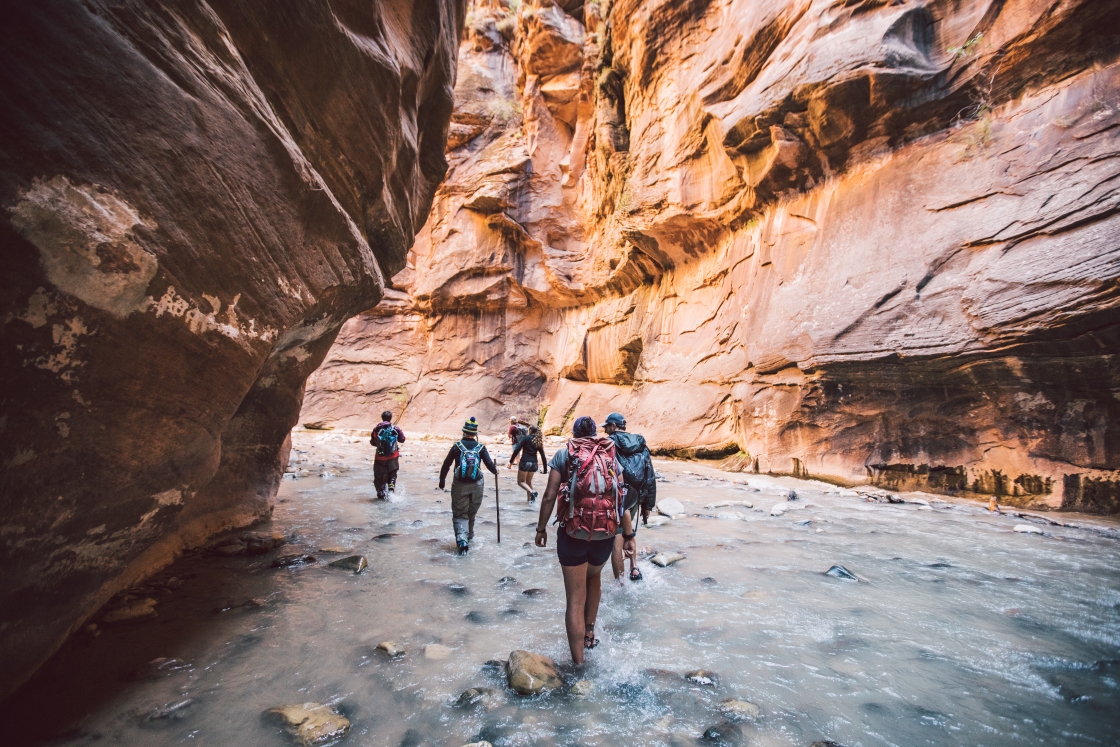 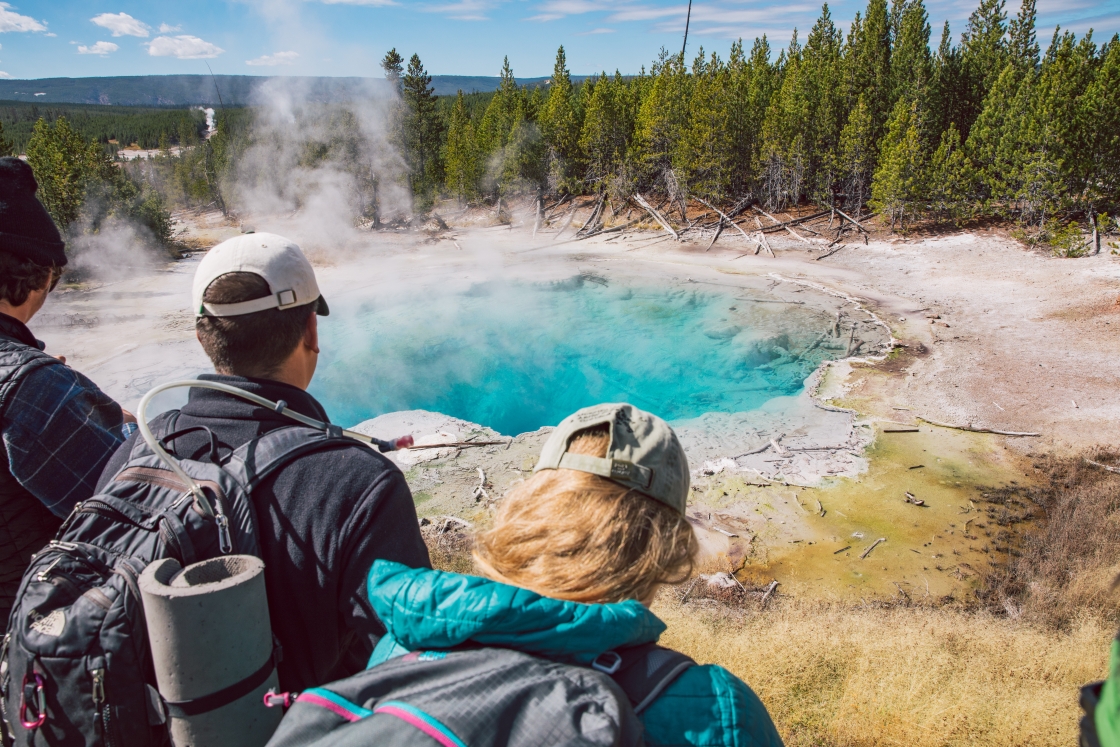 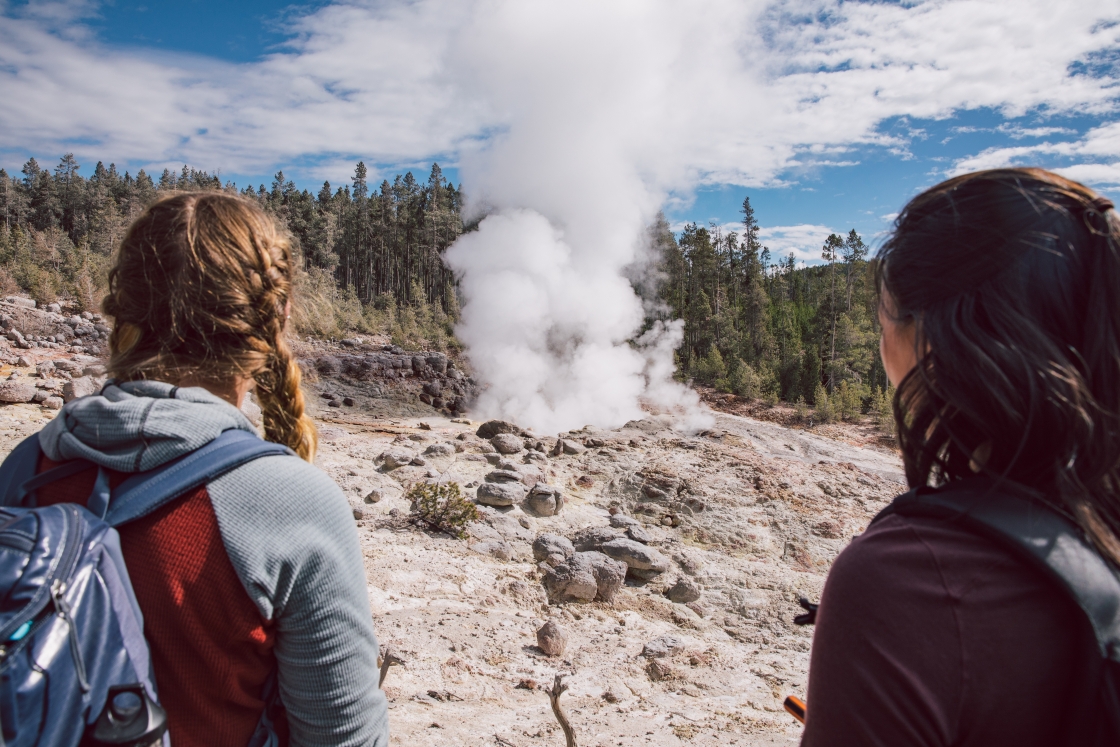 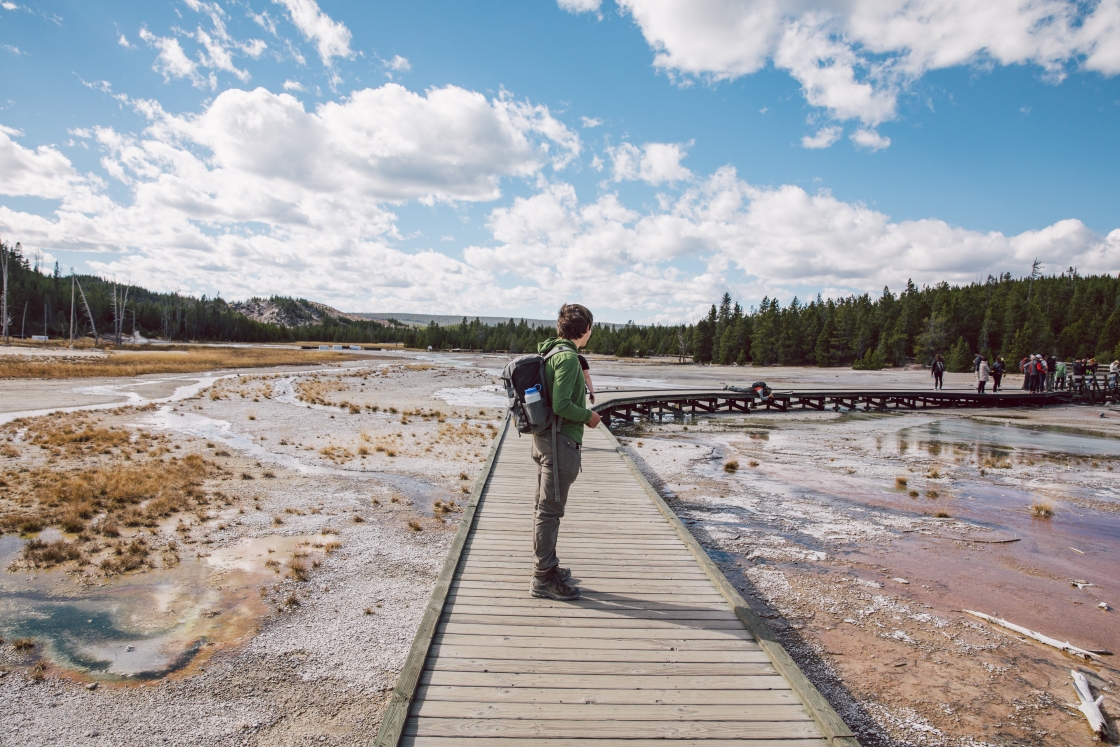 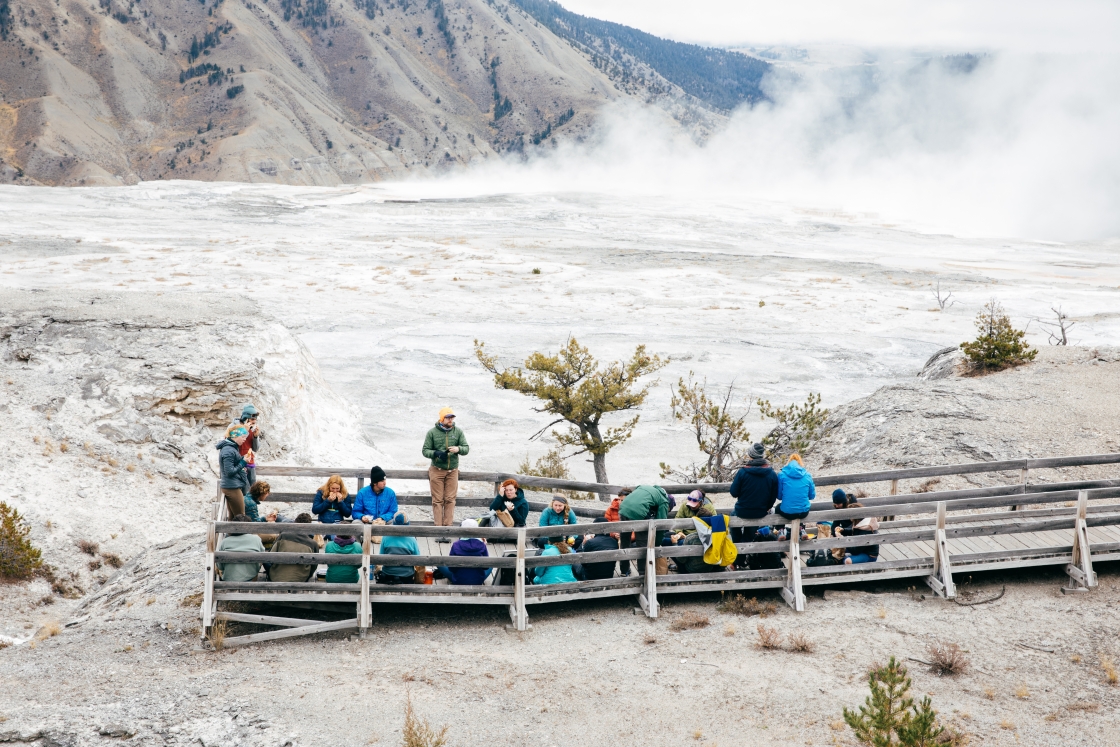 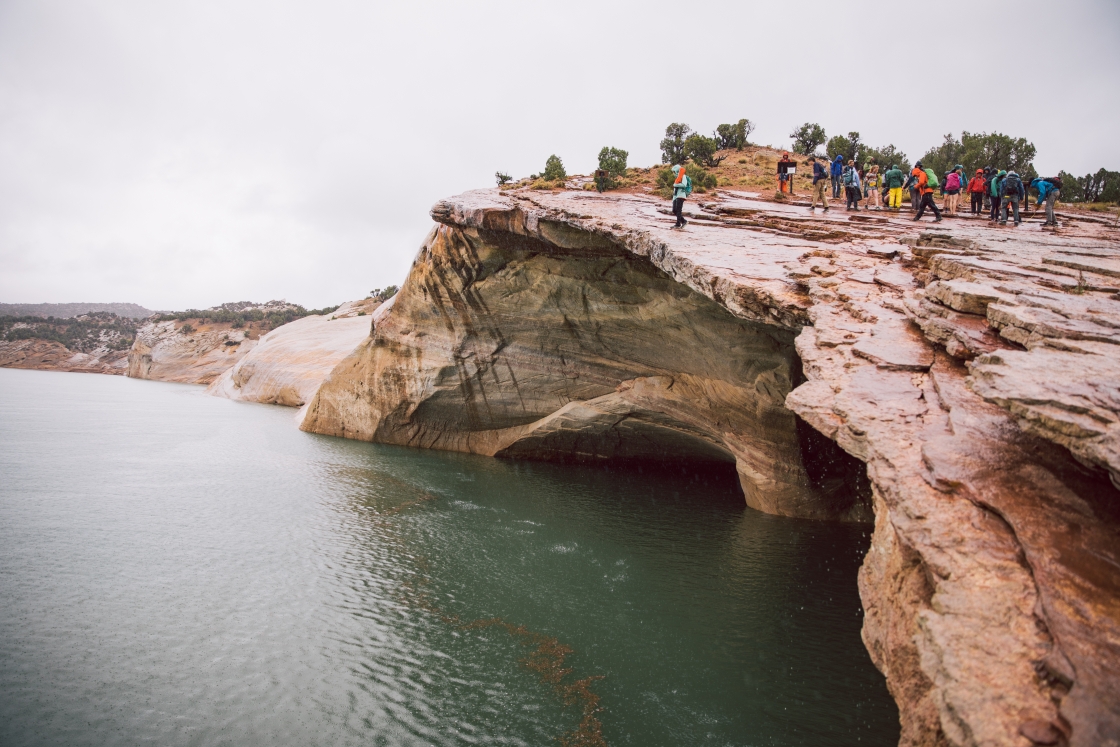 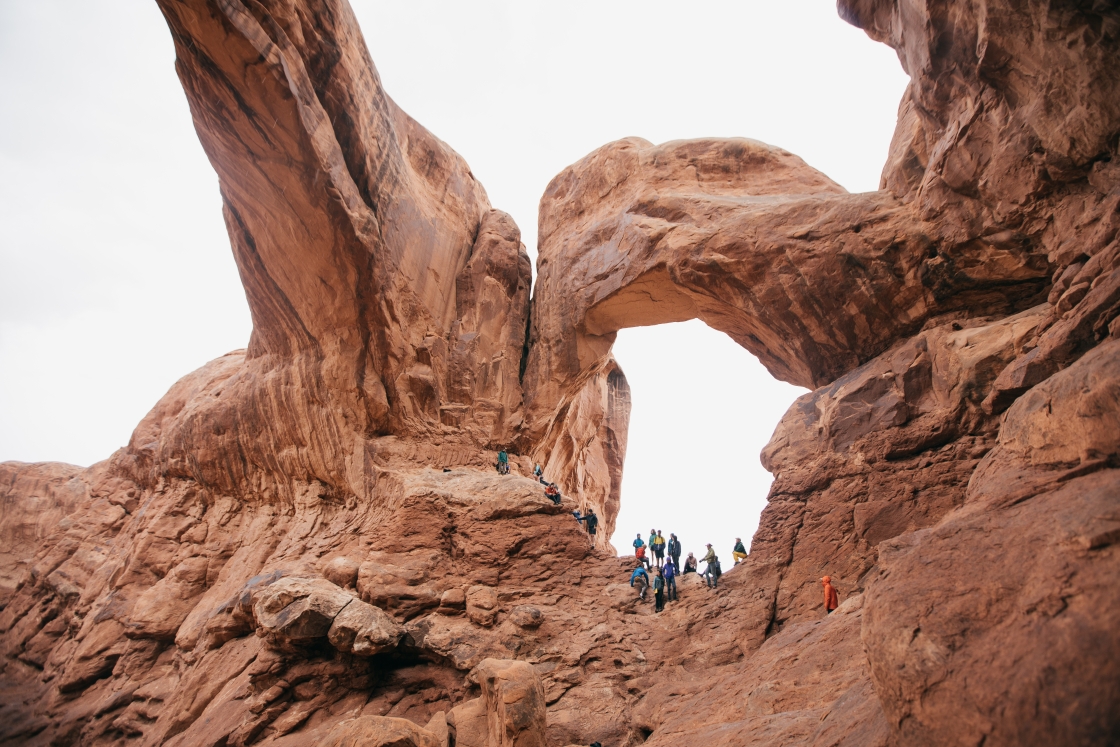 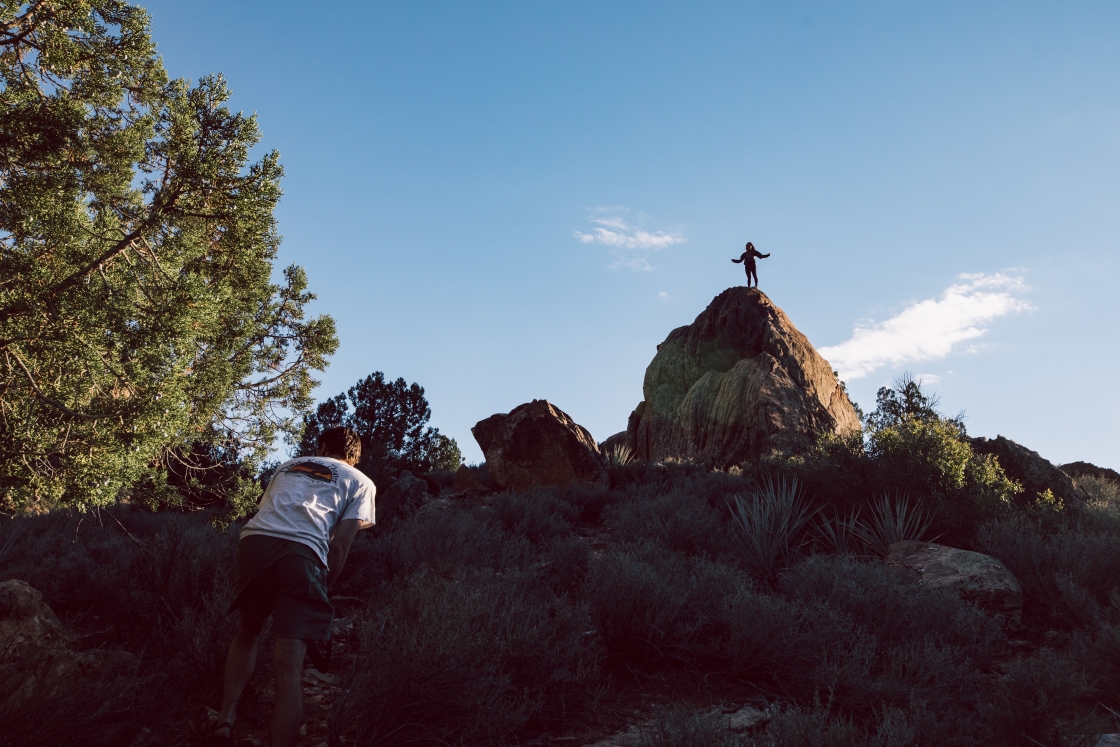 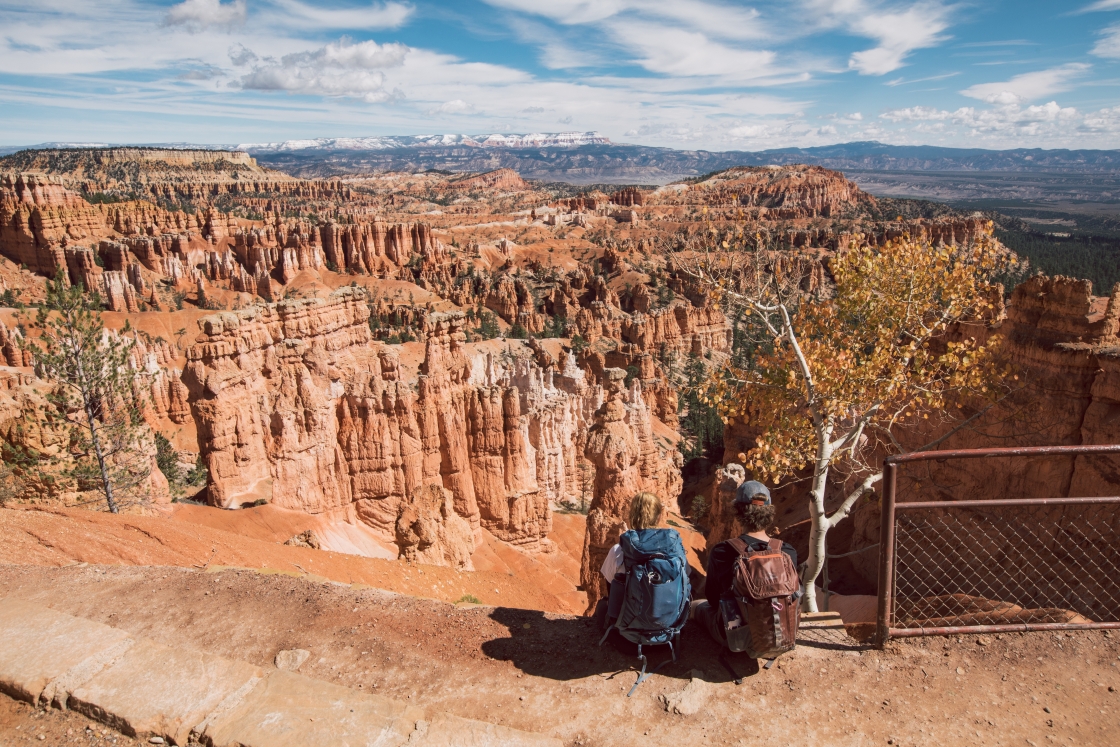 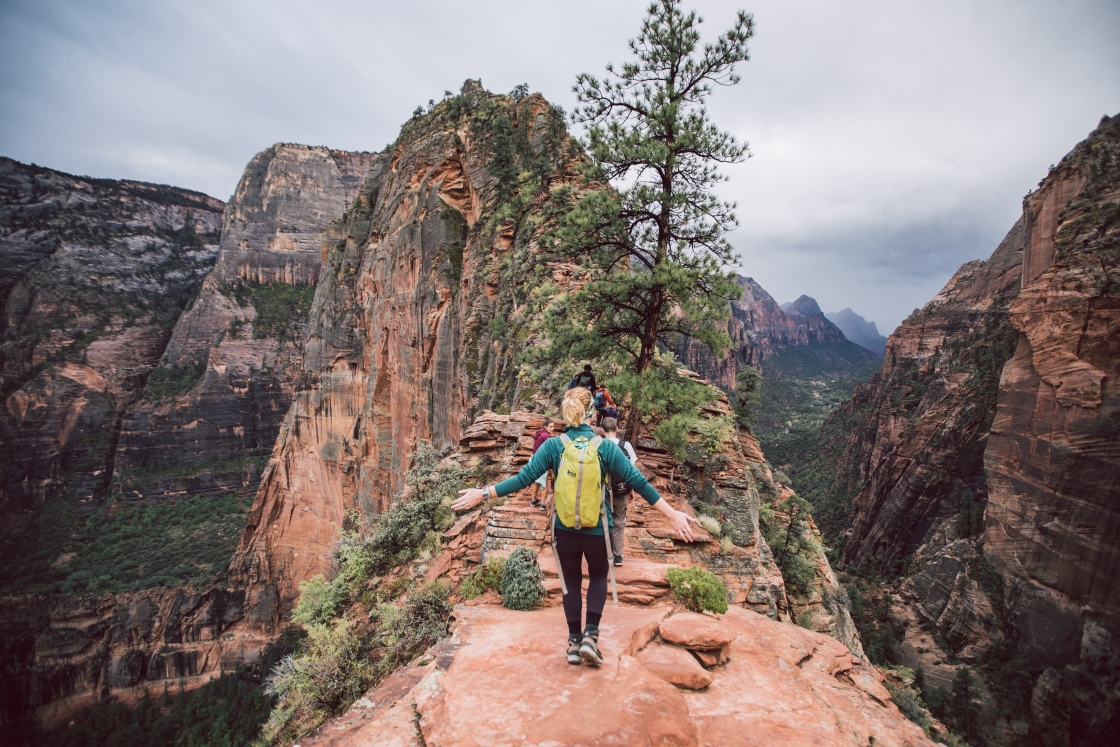 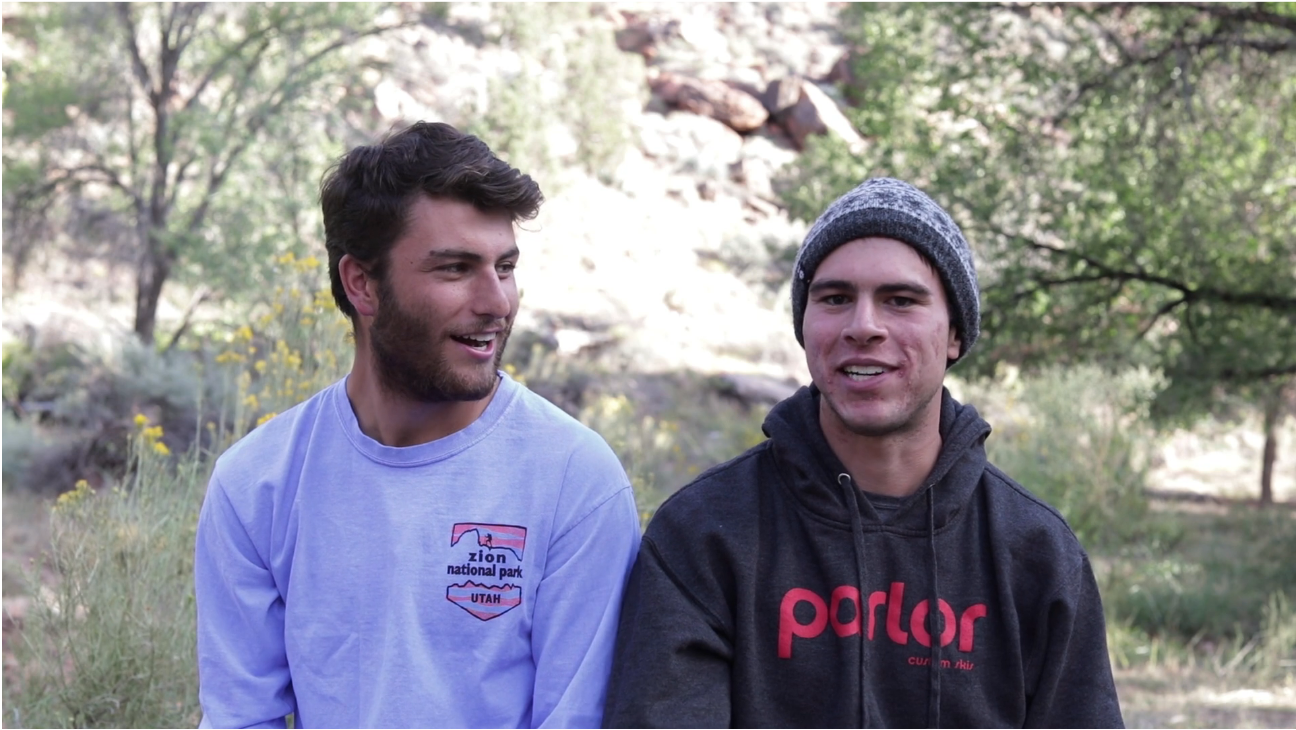 Mountain biking on the Slickrock Trail outside of Moab, Utah. (Photo by Robert Gill)

Back at Split Mountain Campground, the students finish breakfast and pile into the vans. Their destination: Echo Park—a deep canyon at the confluence of the Green and Yampa rivers, where (true to its name) sound waves reflect magnificently from the surrounding cliffs. The site is only about 20 miles upstream from Split Mountain, but it’s a two-hour drive by road—the last 13 miles on steep, unpaved switchbacks to the valley floor. A sign warns that this road is impassible when wet, but the traces of the previous night’s deluge have already evaporated. 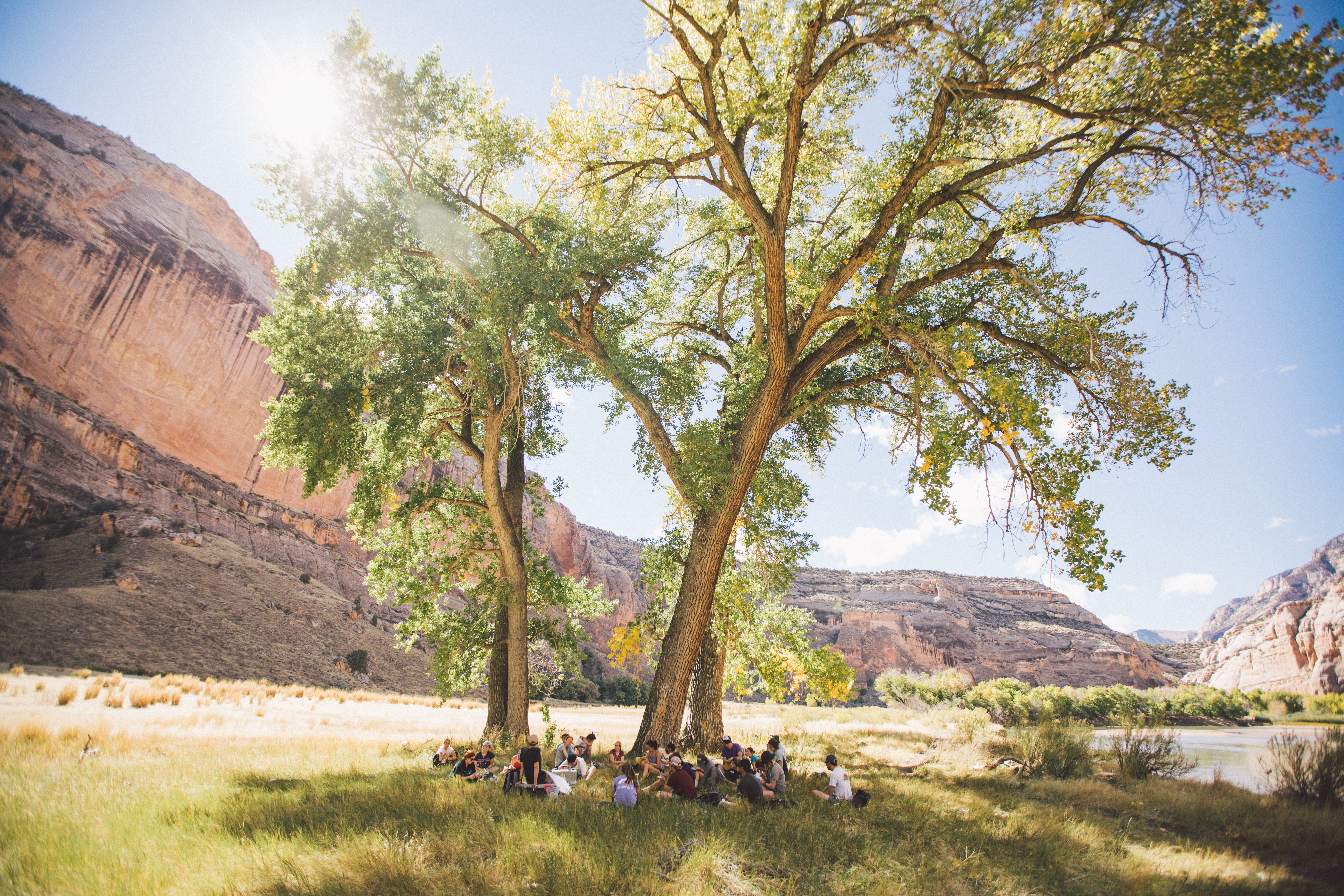 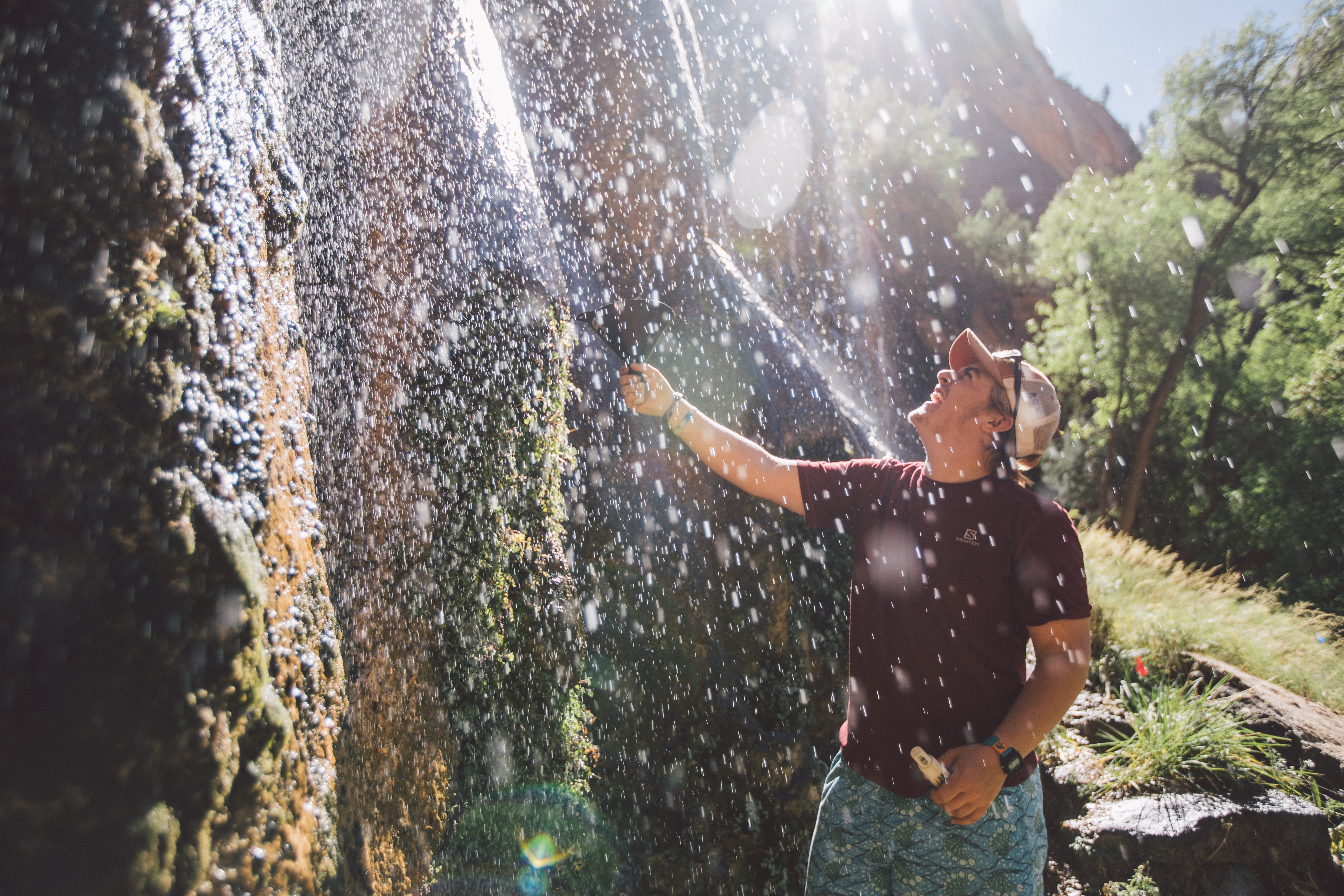 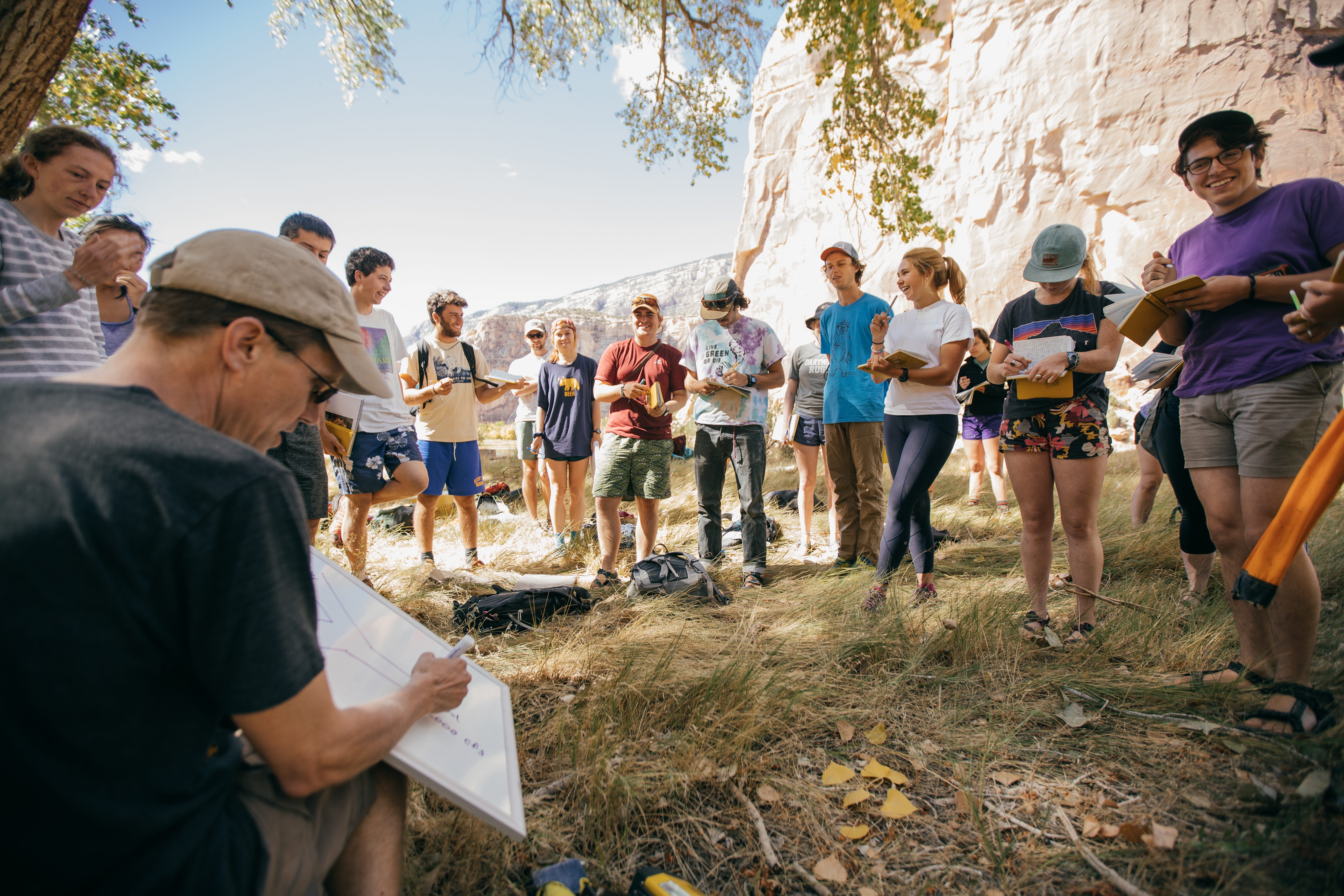 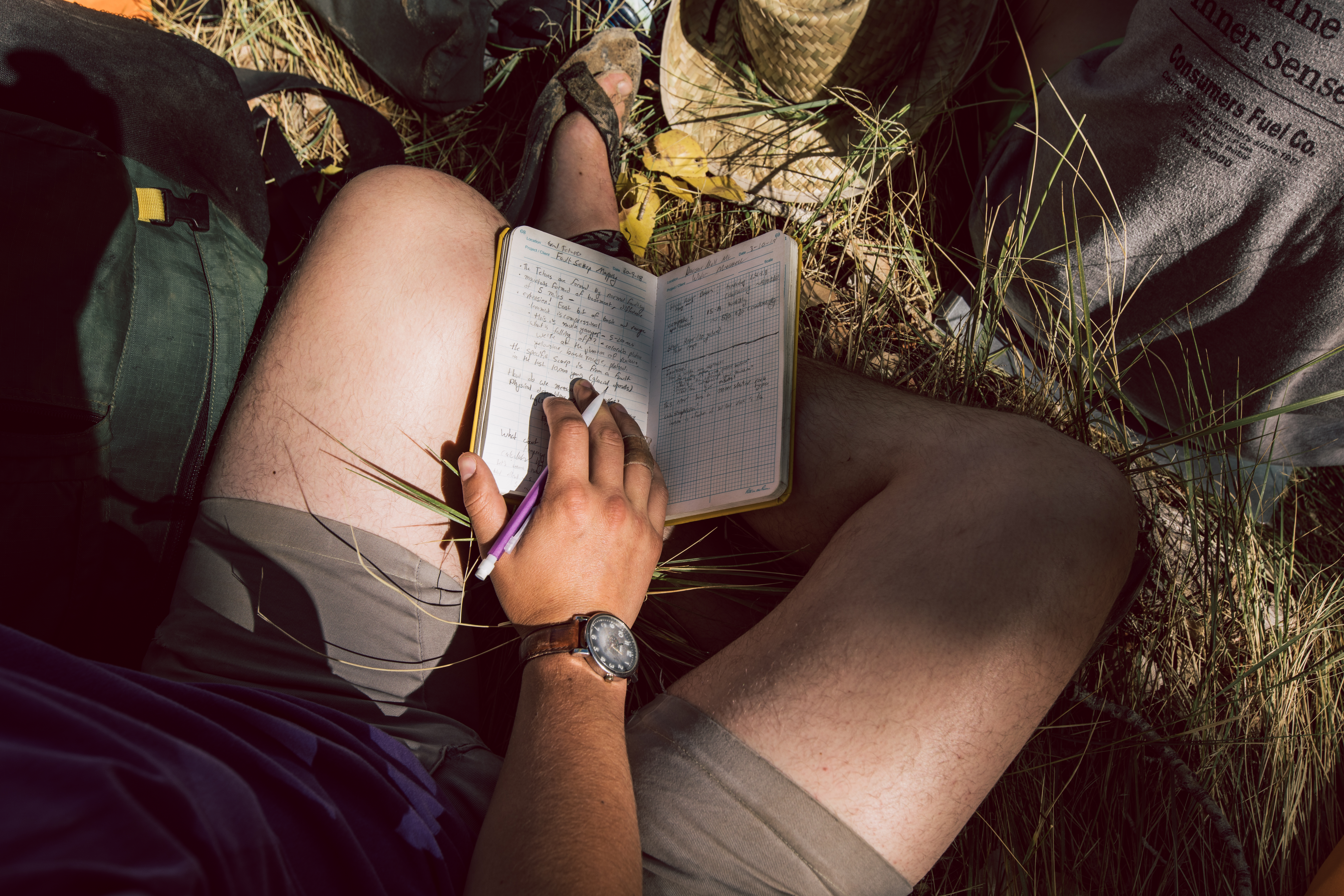 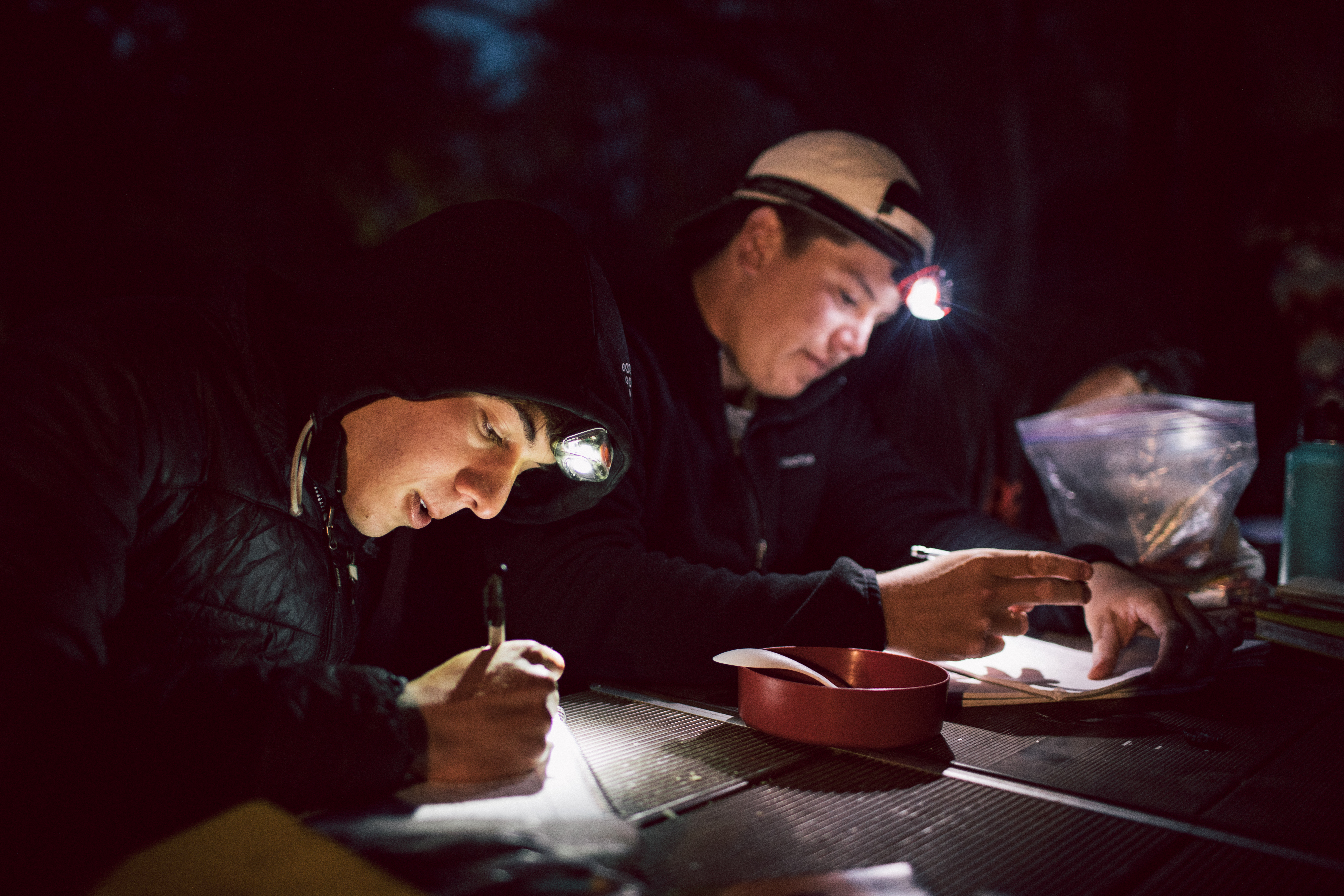 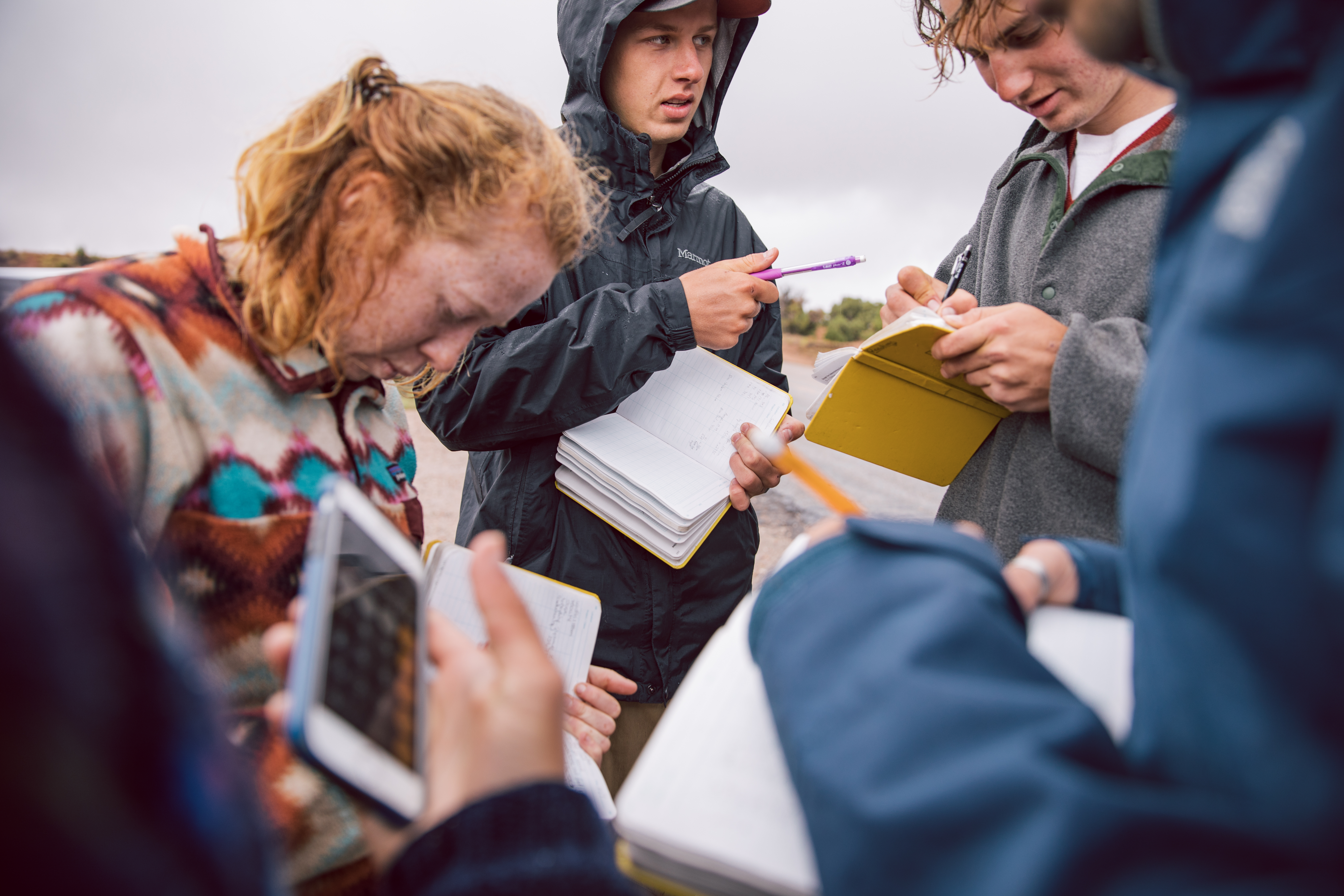 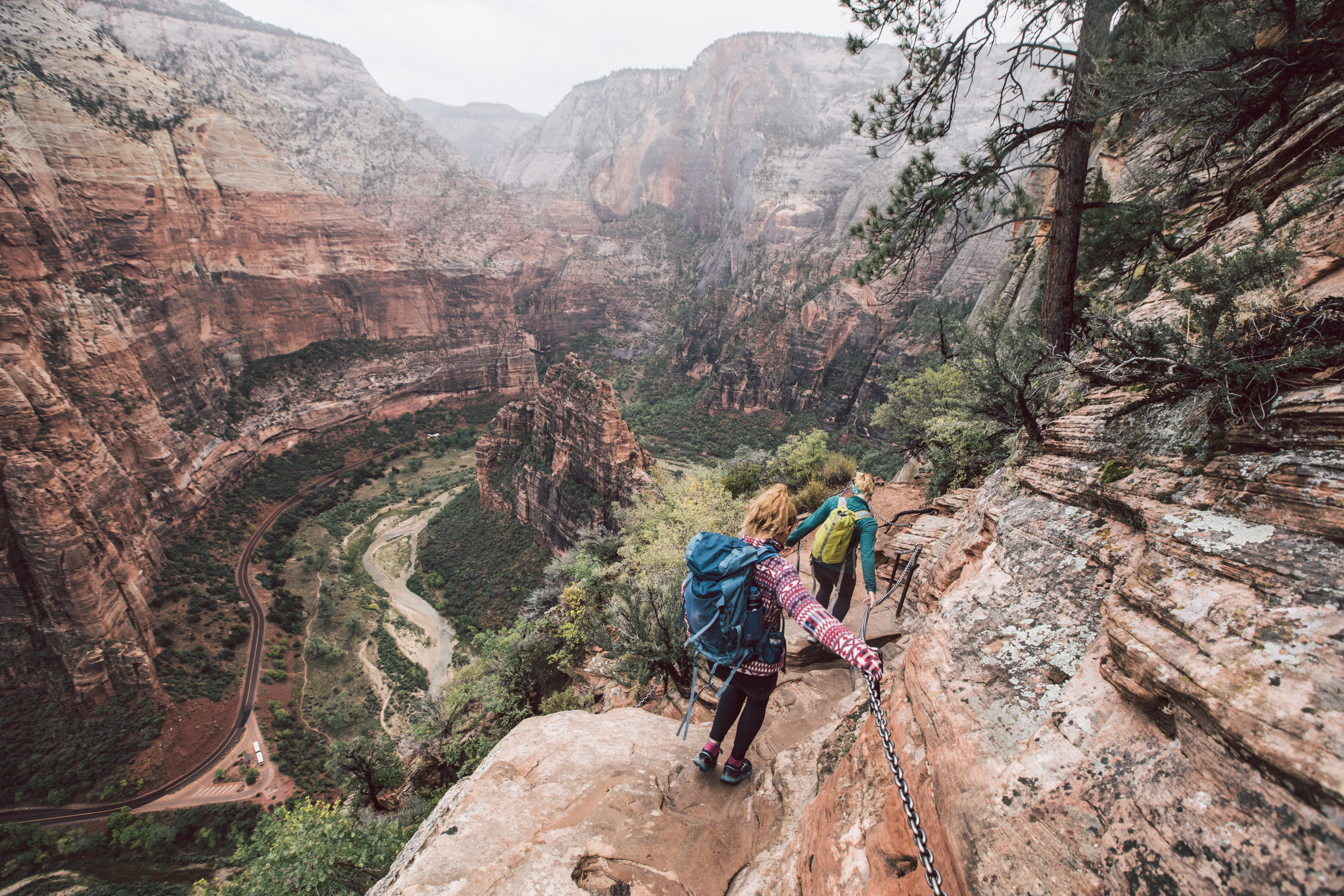 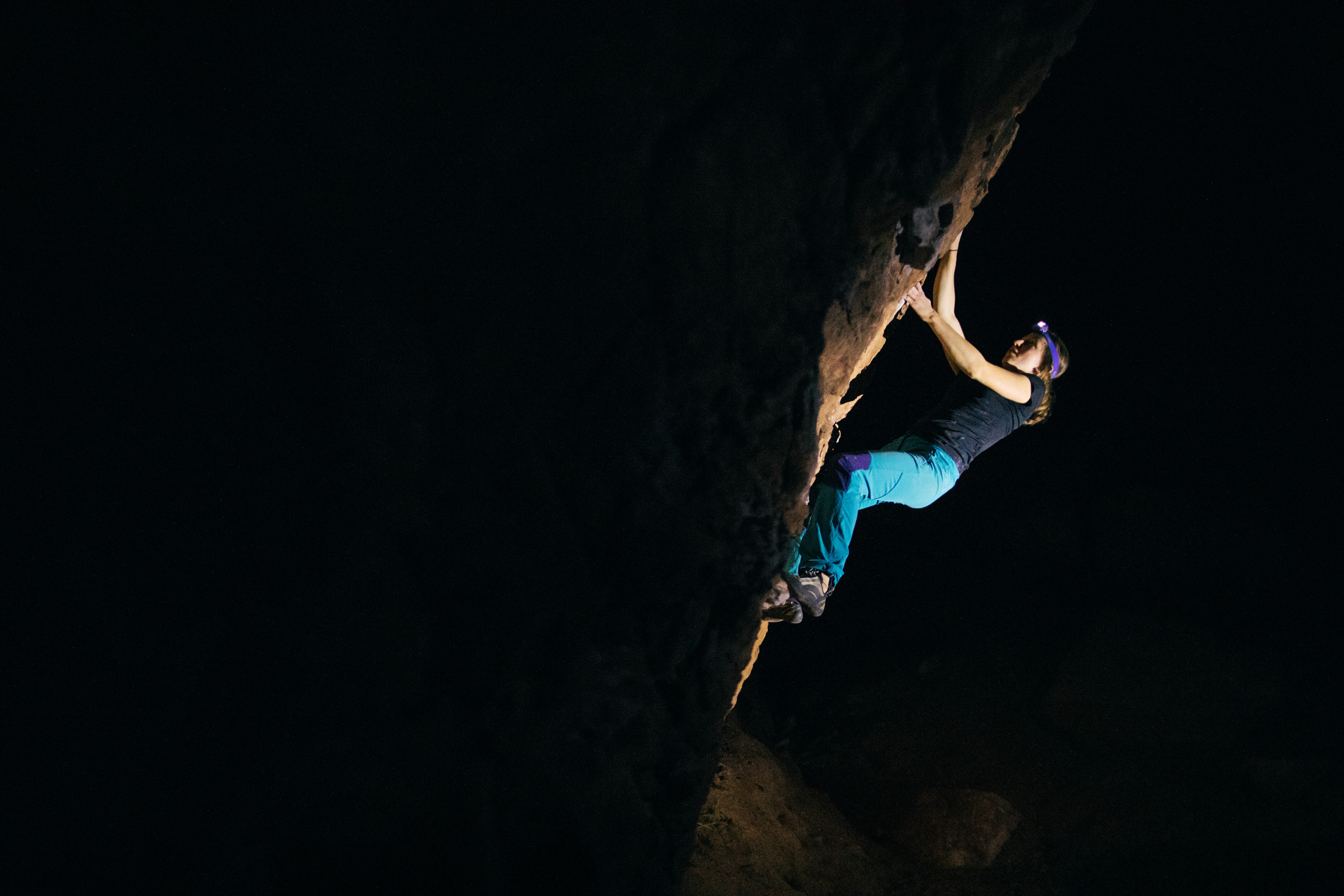 Under the shade of four tall cottonwood trees, Renshaw explains the day’s fieldwork: gathering data to determine how much sediment the river is carrying, and incision rates—that is, how fast its waters are cutting into the riverbed.

The students’ measurements will contribute to this segment’s culminating assignment: to write a scientific abstract estimating the age of the Grand Canyon using data collected here at Echo Park, from Yellowstone’s Soda Butte Creek, and in Zion National Park. It’s an exercise in both writing in a formal scientific mode and, Renshaw says, in learning to analyze and trust their own data.

“But we’re not near the Grand Canyon,” says Kyle Sullivan ’20. He seems to be speaking for many of the other students as he questions just how much can be inferred about the Grand Canyon from what they might learn here in Utah.

Learning to analyze and trust their own data. 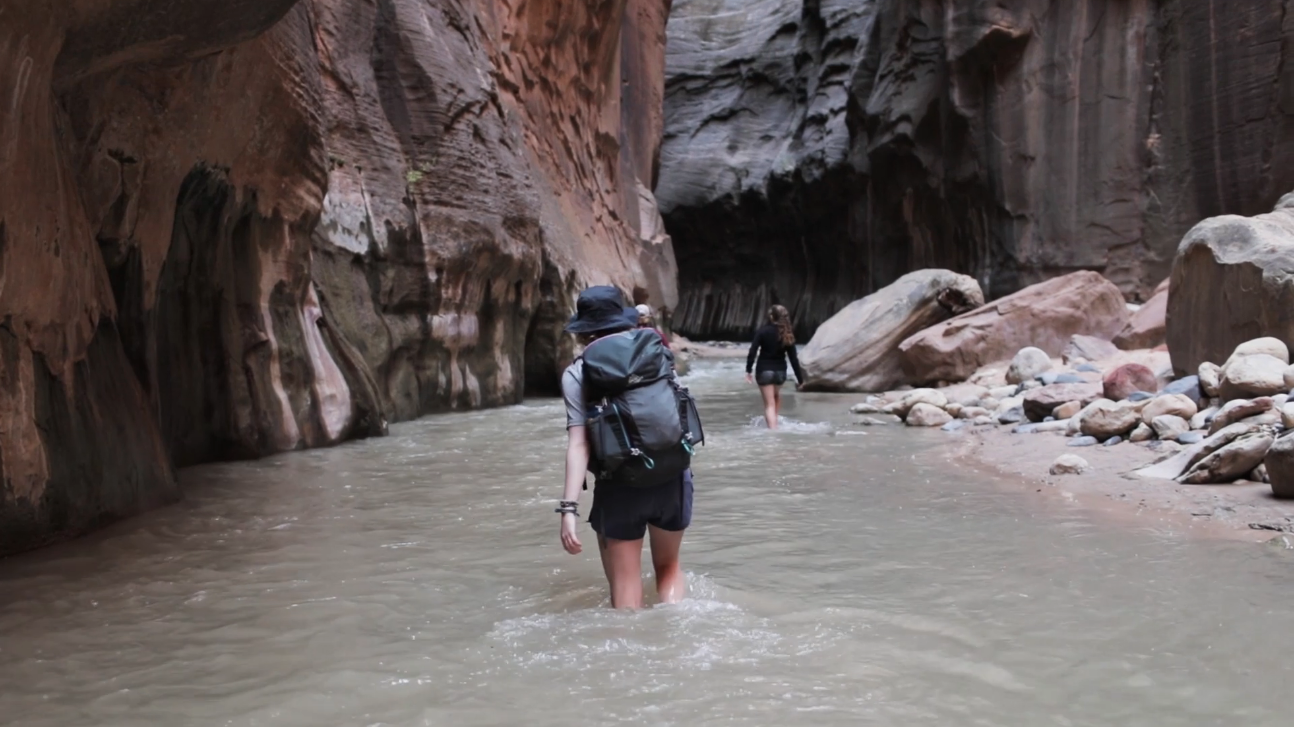 “You own your data; don’t be quick to discard it,” Renshaw tells them. What they have may be imperfect, he says, but the key is to understand its limits and to use that to narrow the range of possible answers to their primary question.

In short, Renshaw is teaching them to think like scientists. Even imperfect data, he says, can add to their knowledge—if they analyze them critically. For instance, he says, data they’ve already collected from Soda Butte suggest that precipitation patterns are important for understanding incision rates.

“A week ago, you would have had no idea that precipitation mattered, or most of you would have said if it were drier, the incision rate would be slower, when it’s actually the opposite,” he says. “That’s what I’m trying to get at. You now have a placeholder that’s telling you much more about the system than you knew.”

For several of the students, Sullivan included, it’s an aha moment. “Today was the first day I really became aware that we’ll be able to relate all this proxy data that we have to the Grand Canyon,” he says

Angela Li ’20 feels similarly. “When we were sitting in the grass talking to Carl, we were all struggling at first,” she says. “But that questioning ultimately led to this realization—like, whoa, we’re doing this because there are different factors of uncertainty in this kind of data measurement, and by going to different places that each have their own unique feature, you get a bigger picture.”

The group breaks into small teams to collect their measurements from the confluence of the Green and Yampa Rivers. By mistake, the Stretch tape measures have been left behind at the campground, so the students have to improvise, using whatever they can find on hand, including their own bodies.

“We forgot our tape measures, so we used stadia rods to make our measurements, and we floated ourselves and random things down the river in order to find out how fast the river was flowing,” says April Johnson ’20. “It was the perfect velocity to float down, and it was a gorgeous day.”

Many of the students finish their work quickly and continue playing in the river until it’s time to go.

“I think my favorite moment of the entire Stretch was in Echo Canyon when we were taking that river data,” says Kellen Appleton ’20. “People needed to measure velocity, so they floated themselves down the river like it was a theme park. We just swam for a long time. And then the next day we got up and did more science. It was great.” 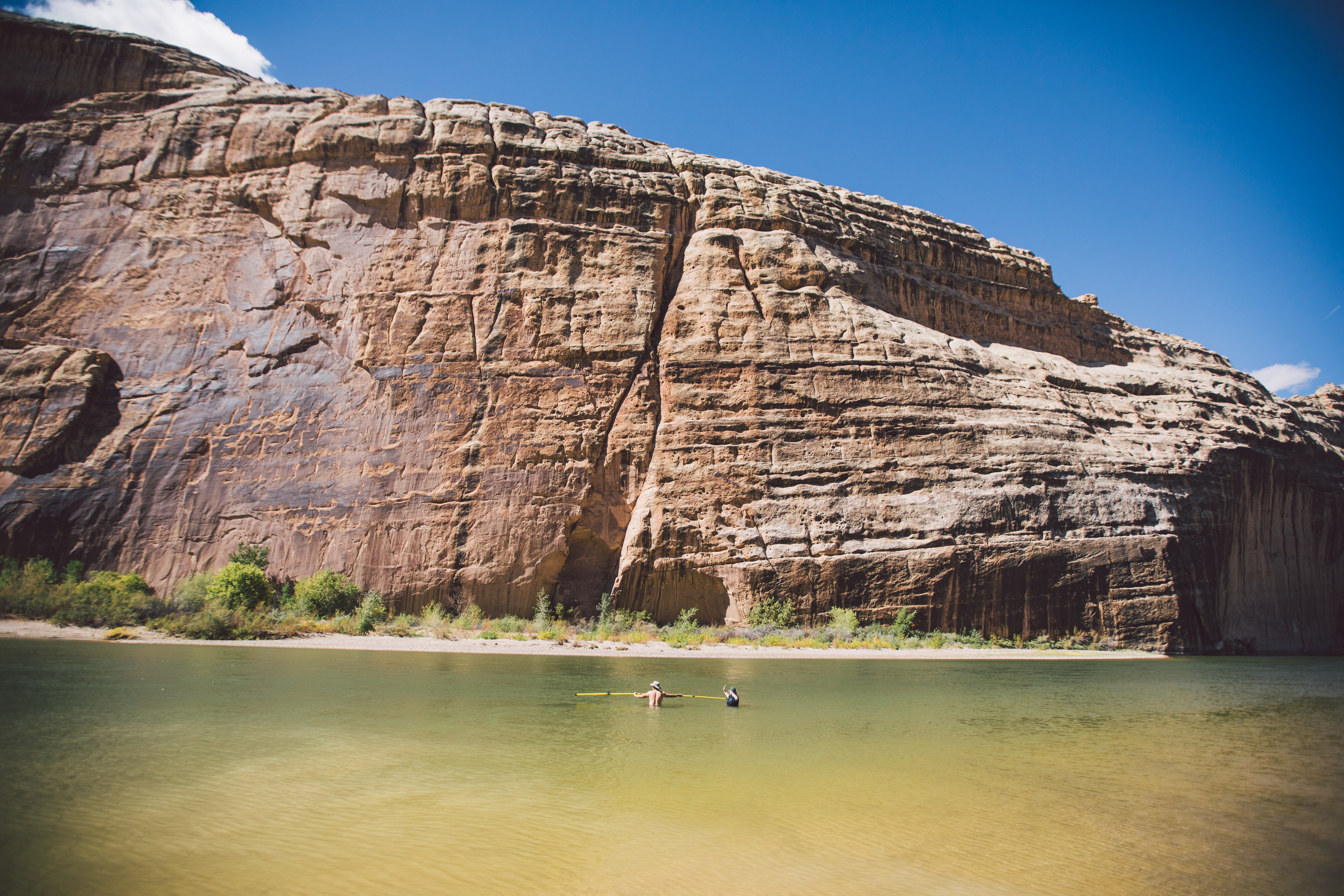 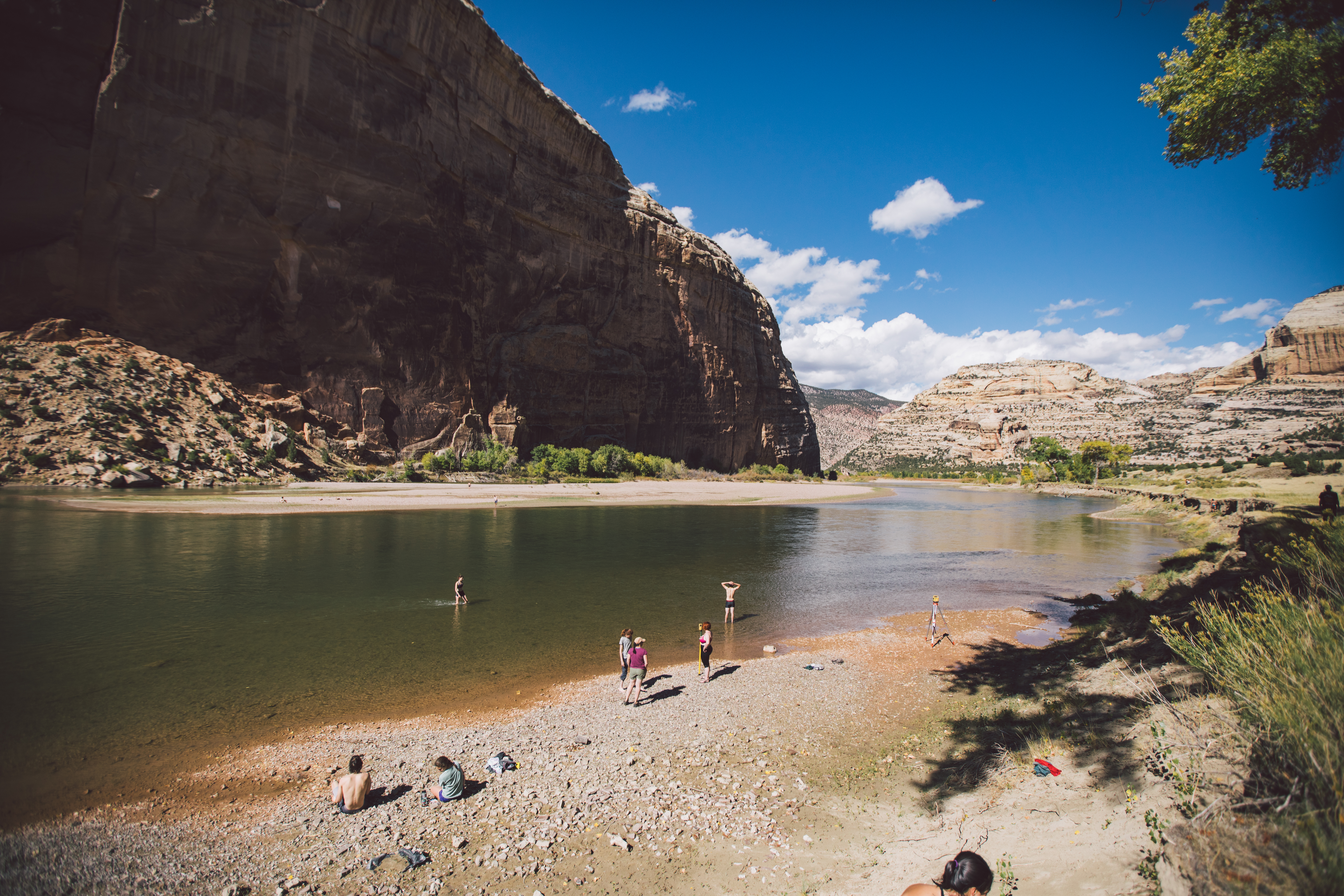 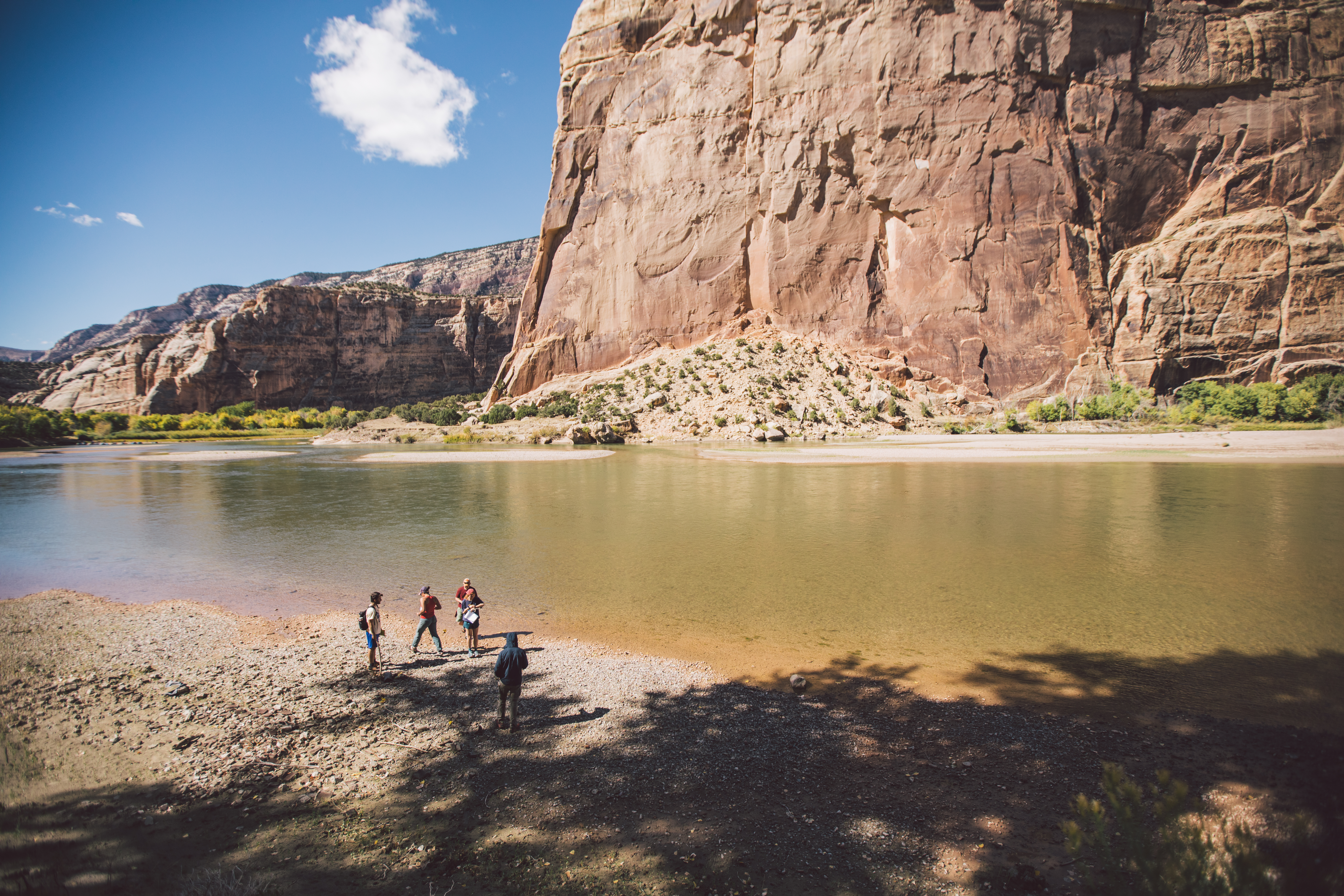 California to the Grand Canyon 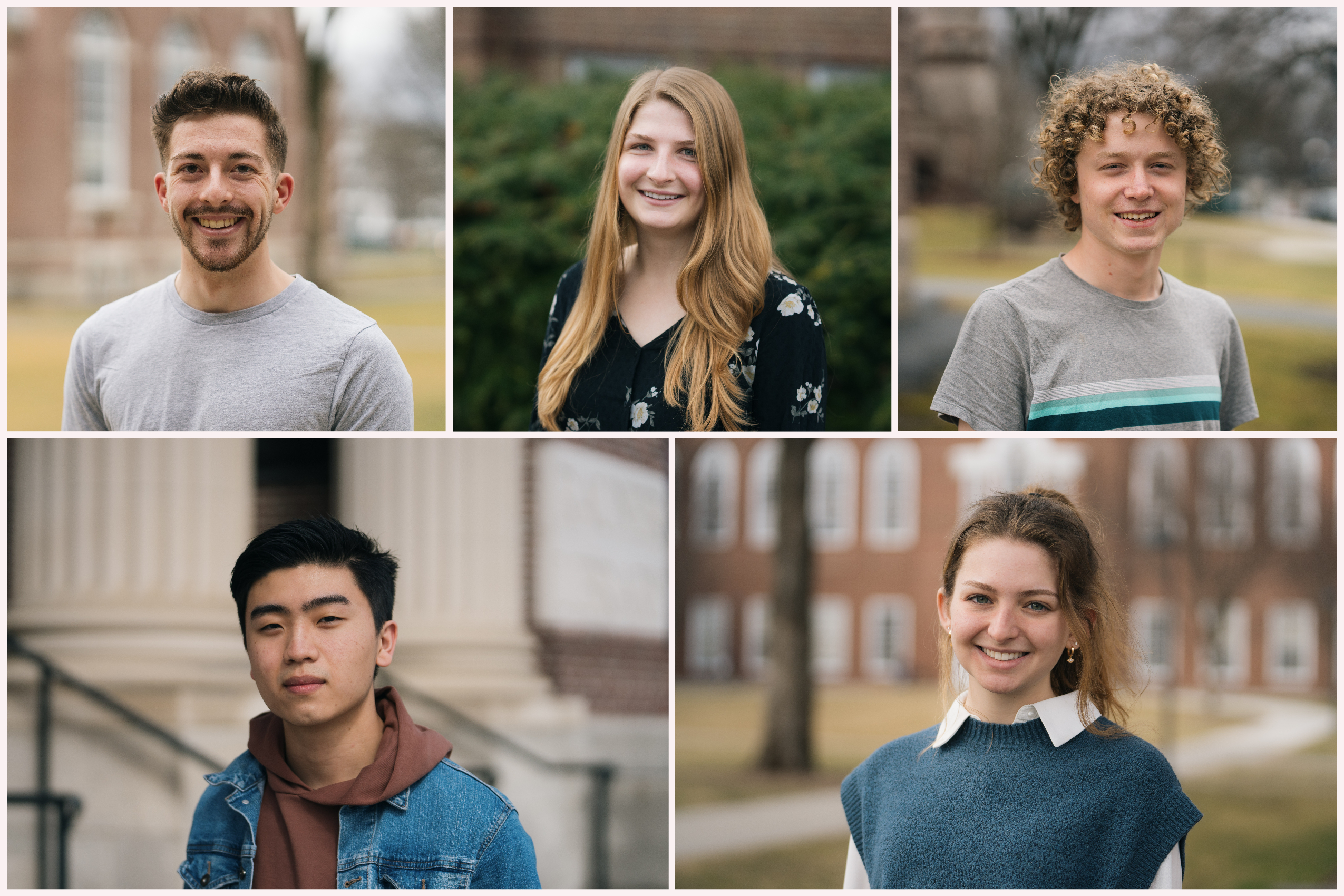 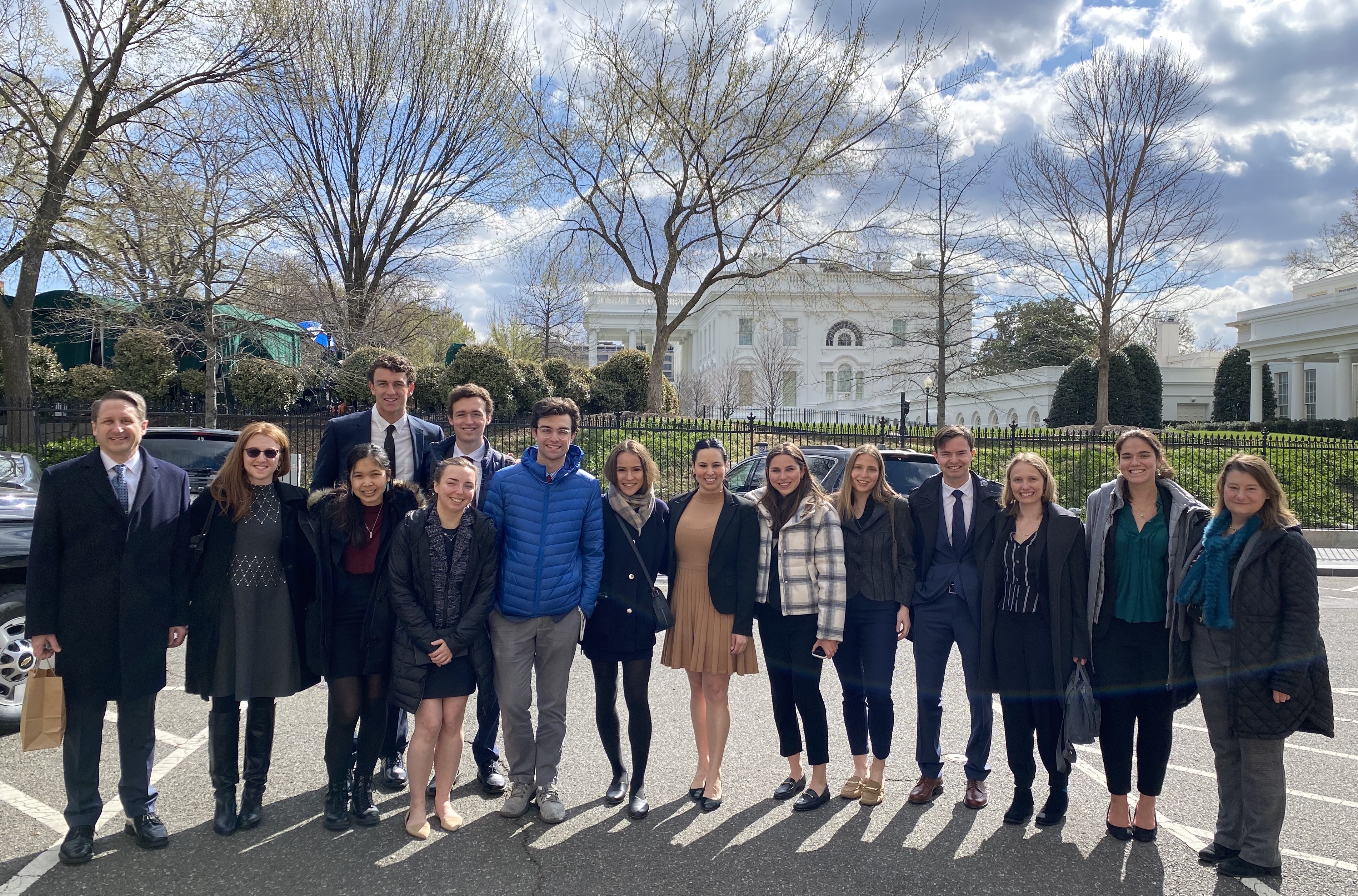