The Top Stories of 2022 at Dartmouth

The year in review includes celebrations and a repatriation. 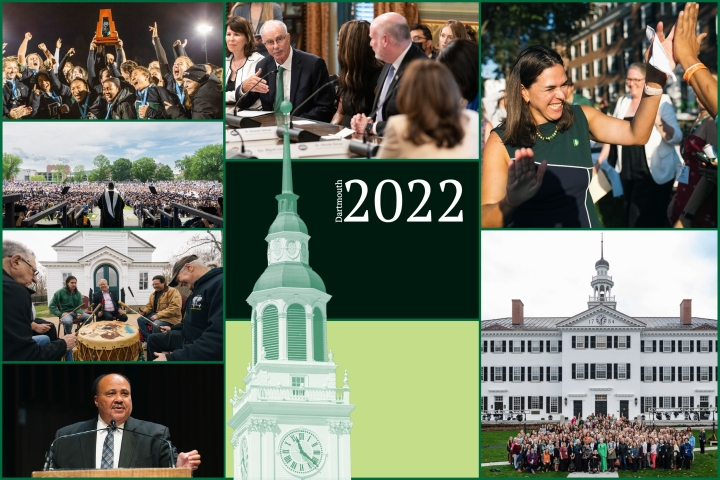 The year 2022 might be remembered as the great comeback. With most of the pandemic restrictions of the past two years finally loosened, the Dartmouth campus came roaring to life as students, faculty, and staff reveled in renewed opportunities to gather, work, and learn together.

Here’s a look at some of the highlights Dartmouth News covered in 2022.

First the big news: In January, President Philip J. Hanlon ’77 announced plans to step down at the end of the 2022-2023 academic year, spurring reflections on his accomplishments over his past decade in office. But Dartmouth’s 18th president had no intention of resting on his laurels, instead outlining an ambitious five-point agenda for the remaining 18 months of his tenure and announcing a historic gift to extend need-blind admissions to international students. 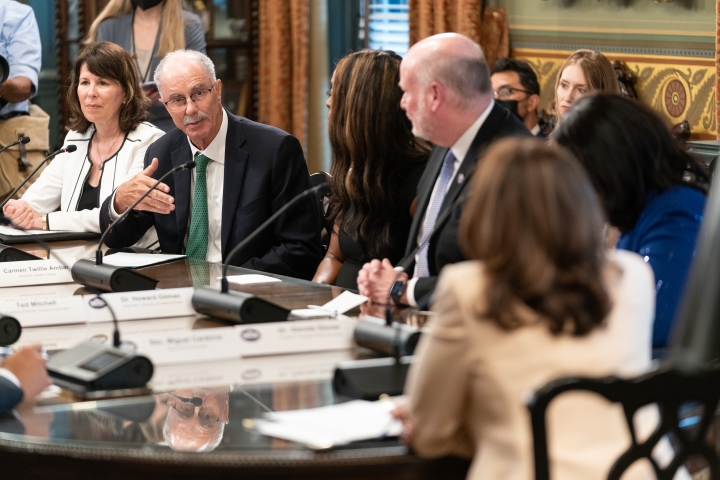 President Philip J. Hanlon ’77, shown here attending a roundtable discussion at the White House with Vice President Kamala Harris, announced in January that he will step down in June 2023 after leading Dartmouth for 10 years. (Official White House Photo by Lawrence Jackson)

Meanwhile on campus, winter carnival was back in its full glory, polar-bear swim and all. Students made letterpress valentines in the Books Arts Workshop. And students, faculty, and staff rallied on the Green in opposition to the Russian invasion of Ukraine.

In the arts, students performed in Rent, the theater department’s first live musical production in three years, and the Hopkins Center for the Arts staged the avant-garde opera The Force of Things, composed by Associate Professor of Music Ash Fure. The community also watched as eight athletes and two coaches with Big Green ties competed in the Winter Olympics in Beijing.

Highlights of Dartmouth student and faculty research included student linguists conducting field work via social media, construction of a Bronze Age-style oven, a study of how Earth’s atmosphere became oxygenated 2.3 billion years ago, an investigation of the scientific basis for climate liability claims between nations, and a senior thesis featuring interviews with members of Egypt’s Jewish community. And to encourage the next generation of researchers in science, technology, engineering, and math, graduate students from the Guarini School of Graduate and Advanced Studies prepared science kits for local middle school classrooms.

Twenty-eight scholars joined the faculty this year. Dean of the Faculty Elizabeth Smith signed up for a second term as head of Arts and Sciences, Duane Compton was reappointed dean of the Geisel School of Medicine, and Nancy Vogele ’85, a former director of religious and spiritual life, returned to Dartmouth as College chaplain and director of the William Jewett Tucker Center for Spiritual and Ethical Living.

Spring term was bookended by two profound events: Dartmouth’s formal repatriation of the papers of Samson Occom, the 18th-century scholar and minister who helped raise funds for the school that would become Dartmouth College, to his Mohegan descendants; and the return of the annual commencement celebration to the Green, this year headlined by NFL quarterback Russell Wilson and featuring an address by a valedictorian who was the first in her family to attend college. 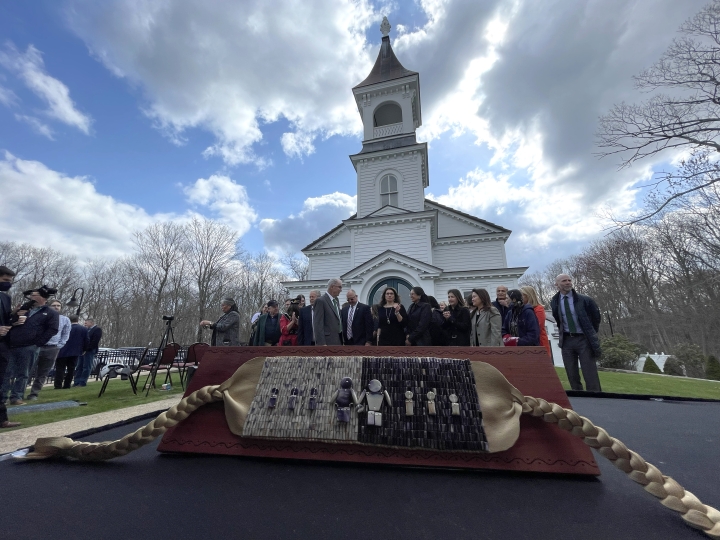 Members of the Mohegan Tribe and a delegation from Dartmouth gather outside the Mohegan Church in Uncasville, Conn., in April. In the foreground is the wampum belt that the tribe presented to President Hanlon as Dartmouth repatriated Samson Occom’s papers to his Mohegan homeland. (Photo by Erin Supinka)

The Hop hosted a festival of new music, sponsored by the Department of Music and the Digital Musics Program. Sixty years to the day after Martin Luther King Jr. spoke on campus, his son delivered the keynote for the Social Justice Awards in Spaulding Auditorium. National Security Advisor Jake Sullivan returned to campus for a Dickey Center-sponsored forum on international security. And the debate team won the national championship for the second year in a row.

After a pandemic hiatus, off-campus programs resumed, including Green City, a Berlin-based interdisciplinary program combining German language study and sustainability engineering. Undergraduates participating in the Dickey Center’s War and Peace Fellows Program traveled to Washington, D.C., in April, where they had a surprise opportunity to meet with U.S. Agency for International Development Administrator Samantha Power.

Dartmouth named a new athletics director and a chief financial officer and a vice president for finance and controller. The Guarini School appointed a new director for the Society of Fellows. The community got its first insight into the incoming Class of 2026, and the College announced the elimination of student loan requirements for undergraduates on financial aid.

The spring also saw the official opening of two new buildings in the West End: the Class of 1982 Engineering and Computer Science Center and the Arthur L. Irving Institute for Energy and Society. And Dartmouth published renderings for the renovation and expansion of the Hop, set to begin in 2023. Irving and the Revers Center at the Tuck School of Business launched TuckLAB: Energy to introduce undergraduates to the complexities of modern energy systems.

Members of the Ukrainian Students Association displayed toys on Baker Lawn to remember the children killed in the Russian invasion.

After a nationwide search, the Board of Trustees made history, electing Sian Leah Beilock to be Dartmouth’s 19th president. When she takes office in July 2023, the cognitive scientist and current Barnard College president will be the first woman to join the Wheelock Succession. 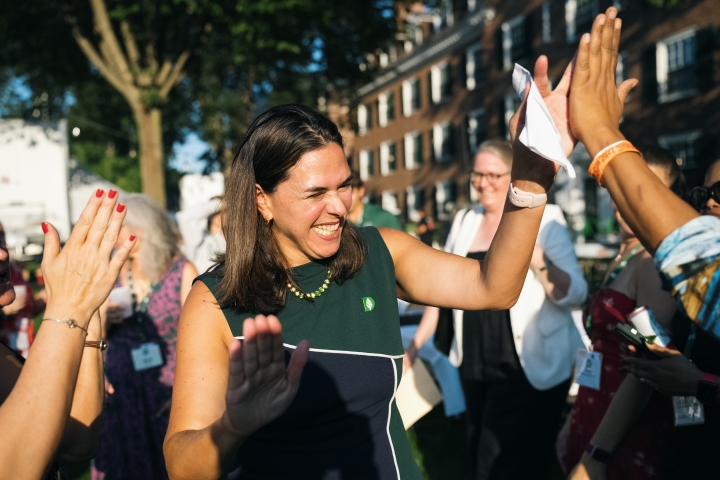 President-elect Sian Leah Beilock received an enthusiastic greeting when she visited campus after her appointment was announced in July, including exchanging high fives with a group of women outside the Class of 1996 reunion tent. (Photo by Eli Burakian ’00)

In other gender-equity news, Katie Colleran joined the Outdoor Programs Office as its director, and Dartmouth celebrated the 50th anniversary of Title IX, the law that protects people from discrimination based on sex. Members of the community had strong reactions to the U.S. Supreme Court ruling to overturn Roe v. Wade, and President Hanlon joined leaders of other colleges and universities at the White House for a discussion about how the ruling may affect students and higher education institutions.

The VoxLab summer theater residency celebrated its 10th anniversary, and Dartmouth welcomed back participants in the Young African Leadership Initiative after a pandemic pause. The Hop’s director talked to Dartmouth News about her vision for the arts as preparations for the expansion began. Dartmouth Dining Services expanded its local food sourcing, the Tuck School of Business received a major gift for a new summit, and one of Dartmouth’s oldest remaining elm trees lost the battle to Dutch elm disease.

Dartmouth researchers used new techniques to study supermassive black holes, and an undergraduate helped develop a new theory of quantum subsystems. For lighter reading, members of the faculty recommended some of their favorite books.

In August, members of the Class of 2020, many of whom had not been back to Hanover since the pandemic began, at last returned to campus for a long-delayed commencement ceremony.

In a season that saw the loss of several members of the Dartmouth community—including President Emeritus James Wright—students, faculty, and staff rallied to support one another. President Hanlon declared Oct. 21 a Day of Caring, suspending classes and inviting community members to take time to explore personal and collective well-being. Dartmouth continued to strengthen mental health services.

At the same time, the new academic year brought the Class of 2026 to campus, as well as four new postdoctoral members of the Society of Fellows. Dartmouth announced Toward Equity, a three-year strategy to unify diversity, equity, and inclusion initiatives across campus.

The Hop premiered The Ritual of Breath Is the Rite to Resist, an operatic collaboration between faculty at Dartmouth and Stanford that explores the search for justice in the wake of racist violence. September saw an influx of major contemporary poets on campus for a symposium on the legacy of poet Robert Hayden.

Several scholars from war-torn Ukraine found refuge in Hanover, thanks to some extended application deadlines and new scholarship and fellowship opportunities, and two world-renowned human rights activists spoke at a “Voices of Dissent” forum sponsored by the Dickey Center. The vice president of the student government was invited to a White House summit on reproductive rights.

Neuroscientist David Silbersweig ’82 and novelist Pico Iyer were in residence as Montgomery Fellows, and President-elect Beilock met members of the community and shared her research at a Geisel forum.

At homecoming, Dartmouth celebrated 50 years of women’s athletics, and in November, women’s rugby took the national title for the second year in a row. More than 500 alumnae returned to Hanover to commemorate 50 years of coeducation and to witness the rededication of Dartmouth Hall, whose renovation was funded by Dartmouth women. 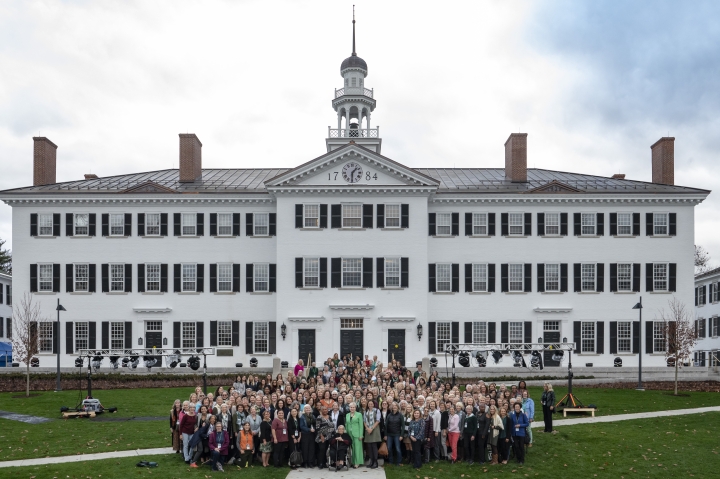 Dozens of alumnae and others on hand for the celebration of the 50th anniversary of coeducation at Dartmouth gather in front of the newly renovated Dartmouth Hall in early November. (Photo by Kata Sasvari)

Scott C. Brown was tapped as dean of the College and April Salas was named head of the Irving Institute, both after serving in those roles in an interim capacity. The Tucker Center hired a new Muslim chaplain and multifaith adviser, and Tracey Brant was named College ombudsperson. Plans to build apartment-style undergraduate housing on Lyme Road were presented to the Hanover Planning Board after several community listening sessions, and three new house professors were tapped to lead School House, East Wheelock House, and West House.

Finally, Dartmouth announced a $100 million program—anchored by a $25 million gift from Penny and James Coulter ’82—to increase leadership opportunities in STEM for historically underrepresented groups. A gift from the Donahoe family funded the inaugural E.E. Just Faculty Fellowship, which is recruiting faculty committed to advancing diversity in STEM fields across the institution. 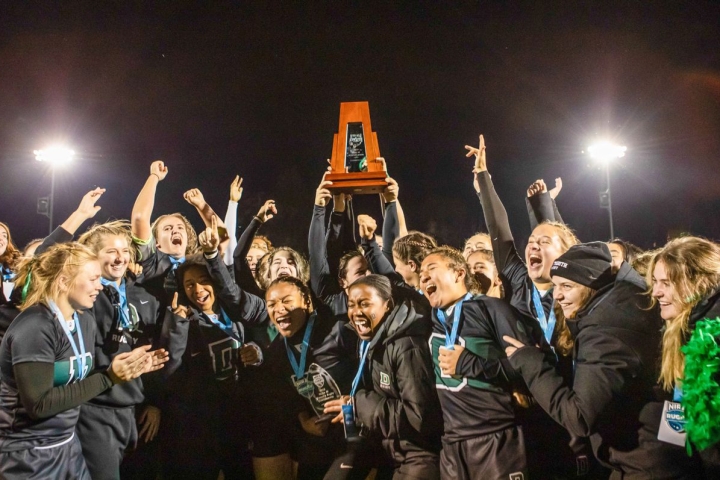 The Big Green women’s rugby team celebrates after repeating as National Intercollegiate Rugby Association Division I champions with a 15-10 victory over No. 2 Harvard in November.

The Year in Honors

Among the notable recognition members of the Dartmouth community received in 2022:

Twelve students and alumni received Fulbright grants to study or work in countries around the world. Adaeze Nduaguba ’17 and Michelle Wang ’21, Thayer ’22, ’23, won Schwarzman Scholarships to study in China. 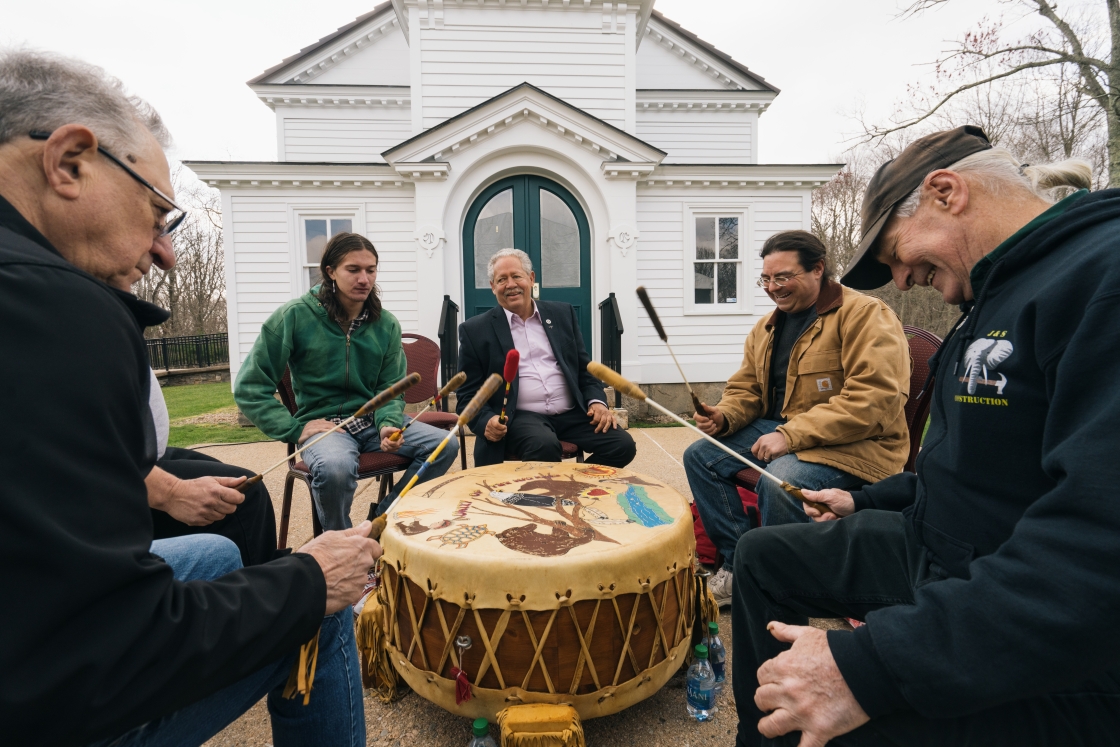 Caption
The Unity of Nations drum group performs outside the Mohegan Church before an April 27 ceremony where a Dartmouth delegation repatriated papers from the Rev. Samson Occom to his Mohegan homeland. Occom, who was born in 1723, helped the Rev. Eleazar Wheelock raise the money that was used to establish Dartmouth, though Occom felt betrayed that Wheelock strayed from the original vision of educating Native youth. (Photo by Eli Burakian ’00)
Image 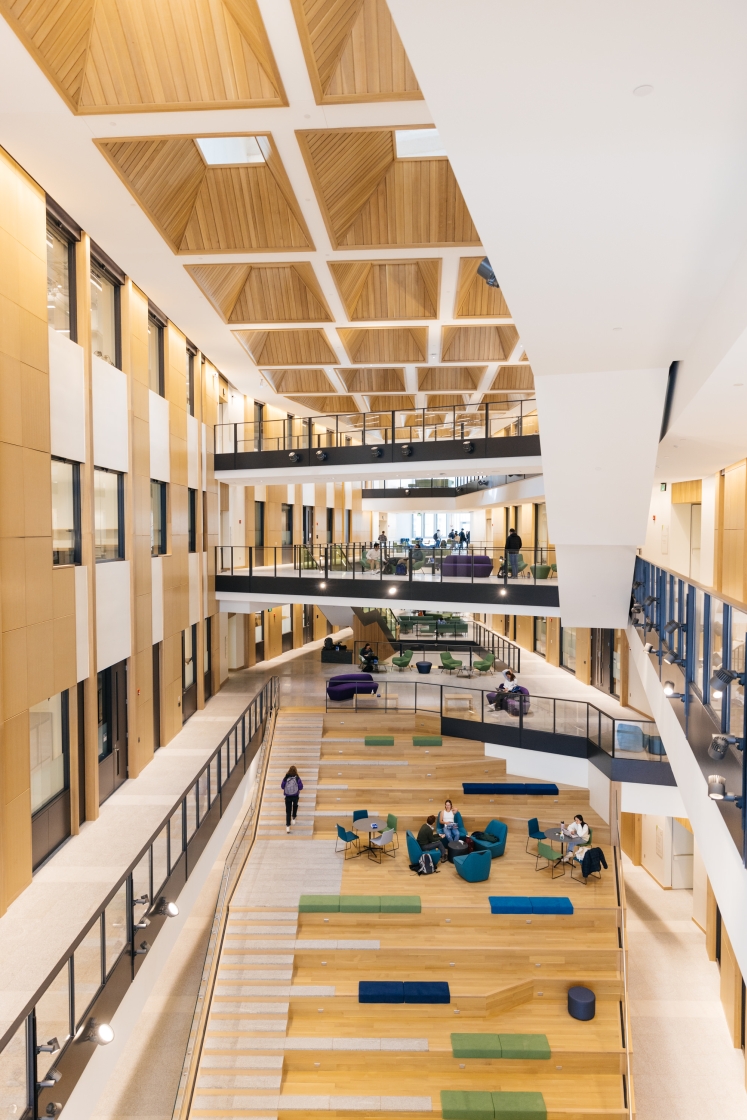 Caption
The Class of ’82 Engineering and Computer Science Center opened in early spring along with the Arthur L. Irving Institute for Energy and Society, drawing new activity and more high-tech scholarship to the West End of campus. (Photo by Robert Gill)
Image 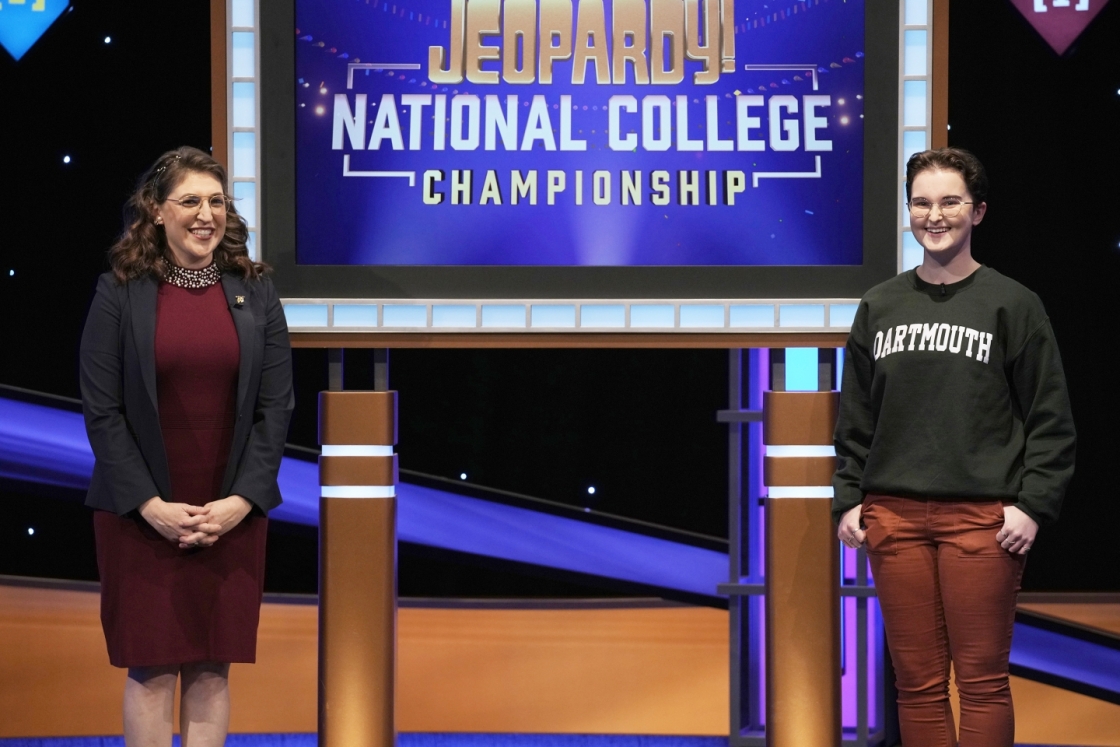 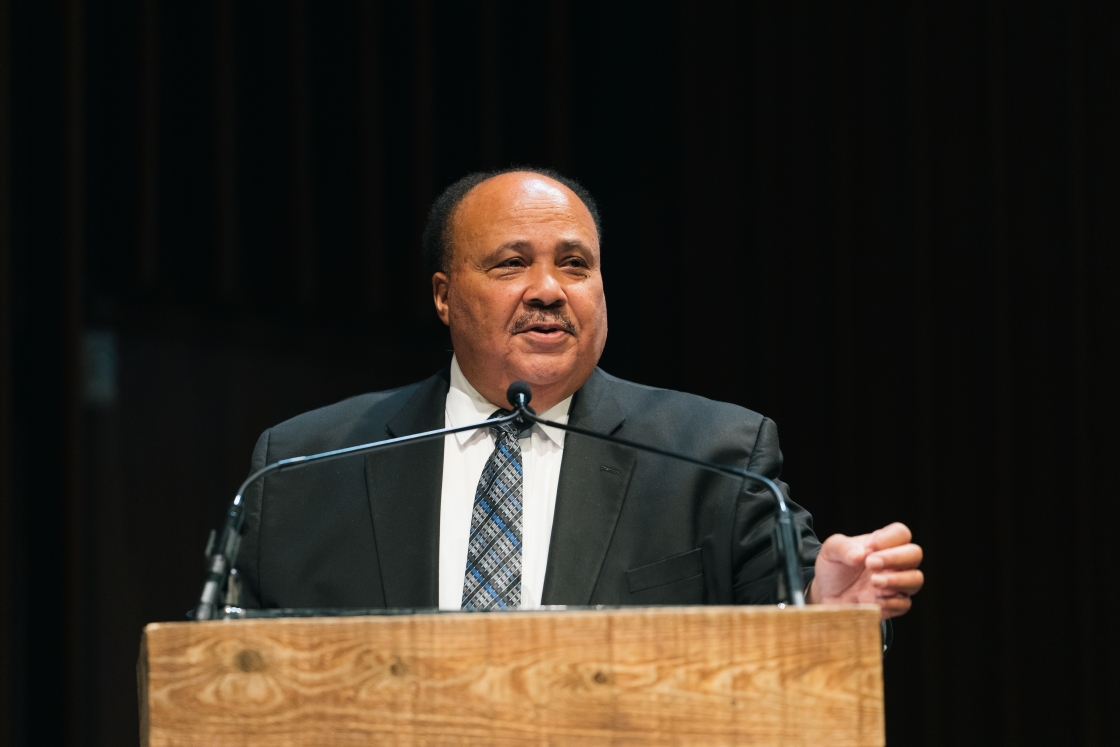 Caption
Martin Luther King III speaks at the Social Justice Awards ceremony on May 23, 60 years to the day after his father, Martin Luther King Jr., spoke to an overflow crowd in Dartmouth Hall about civil rights and voting rights for Black Americans. (Photo by Eli Burakian ’00)
Image 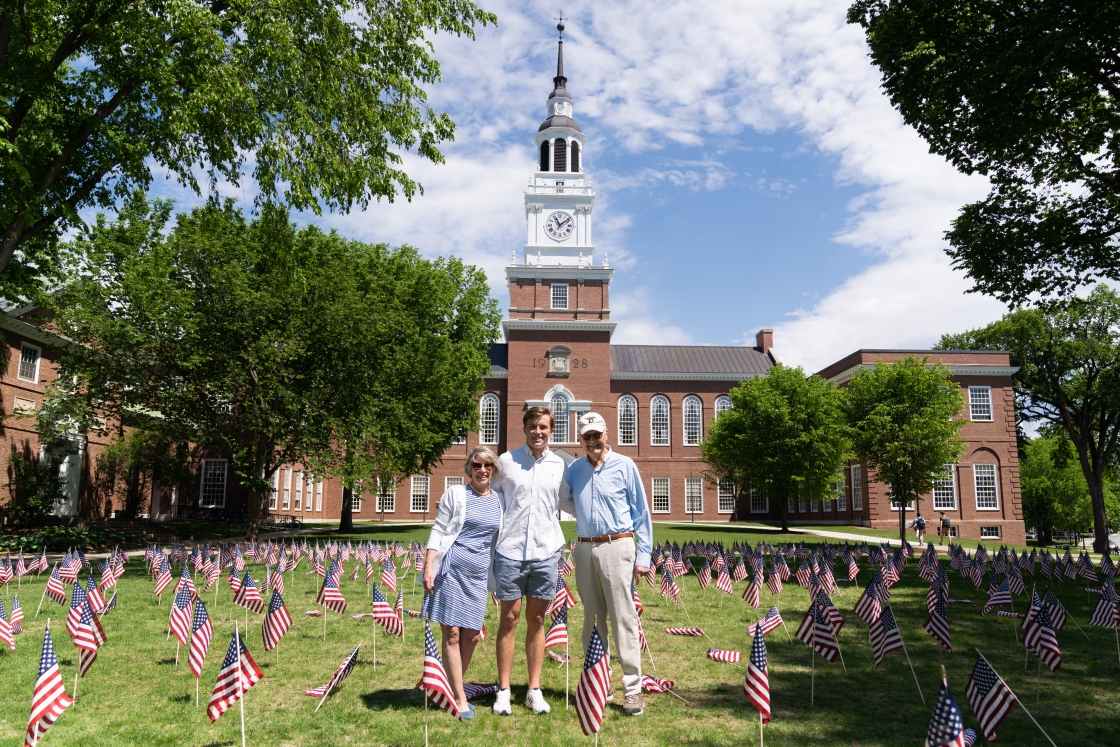 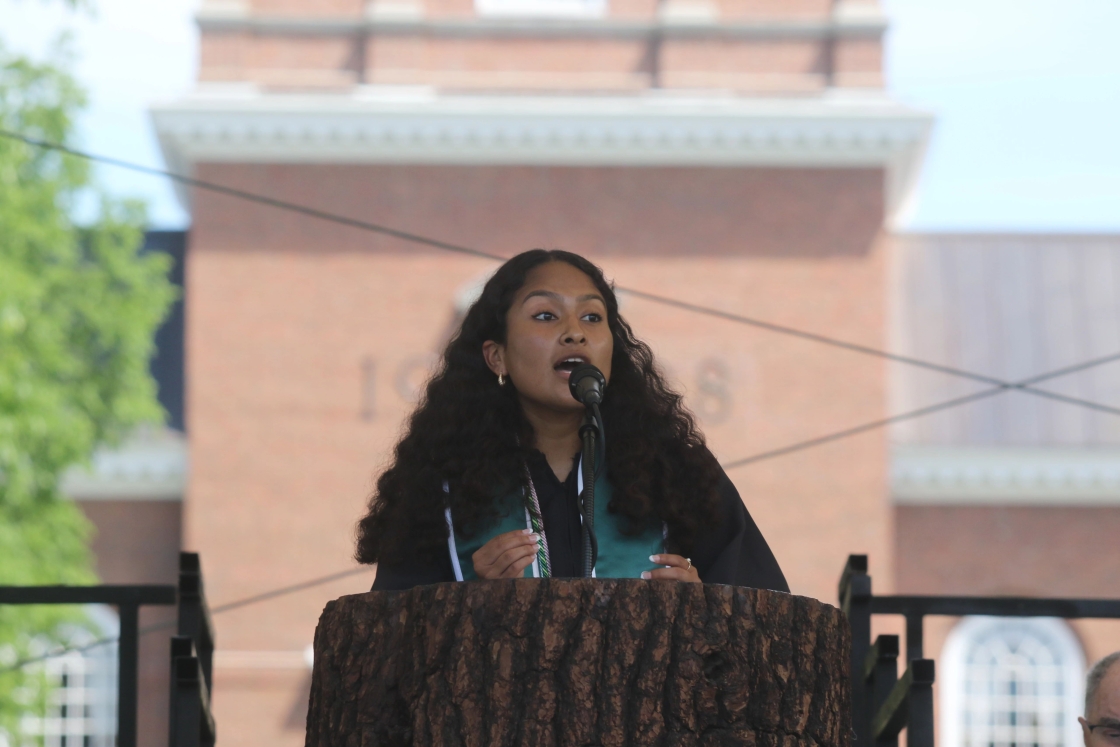 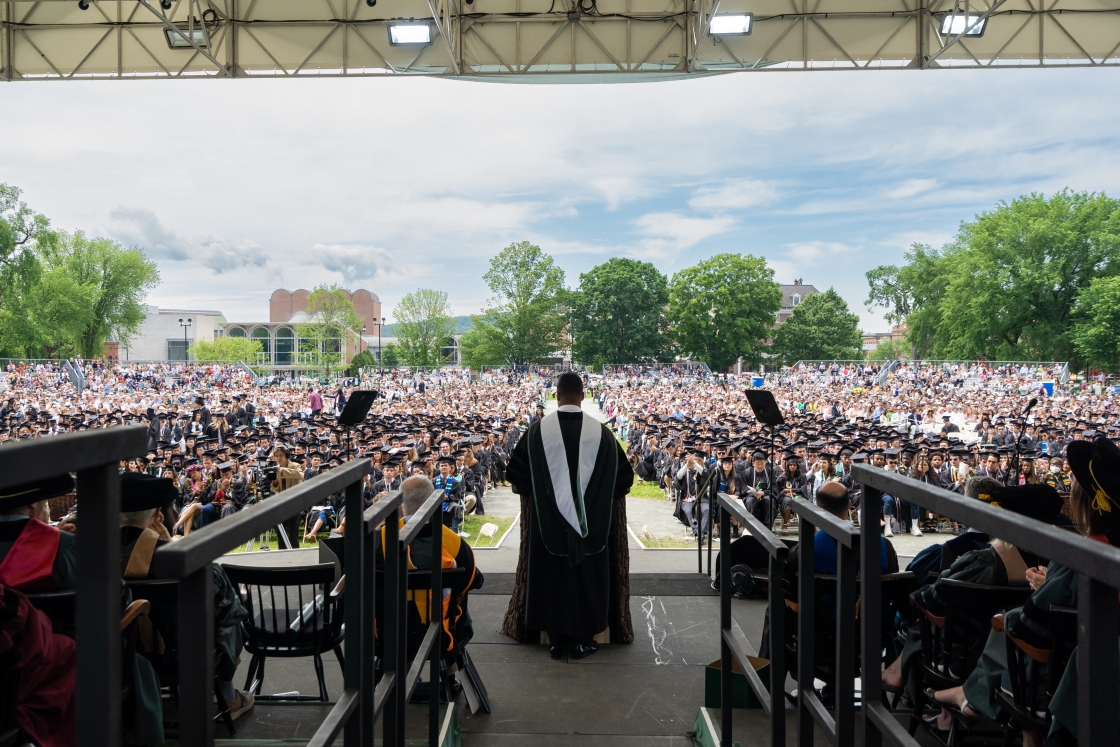 Caption
NFL quarterback Russell Wilson, who spoke about the importance of building a legacy, addresses commencement attendees on the Green in June. (Photo by Julia Levine ’23)
Image 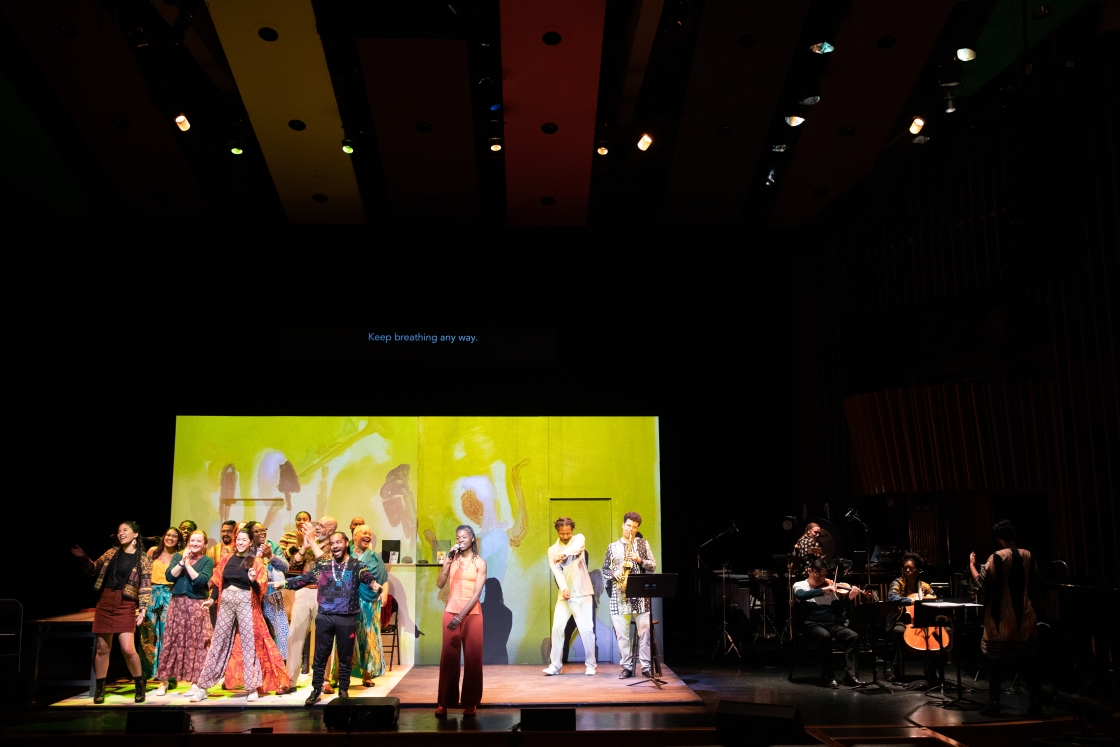 Caption
Actors perform the closing number of “The Ritual of Breath Is the Rite to Resist,” which premiered at the Hopkins Center for the Arts on Sept. 16. The opera recalls the 2014 death of Eric Garner after a New York City police officer placed him in a prohibited chokehold. (Photo by Katie Lenhart )
Image 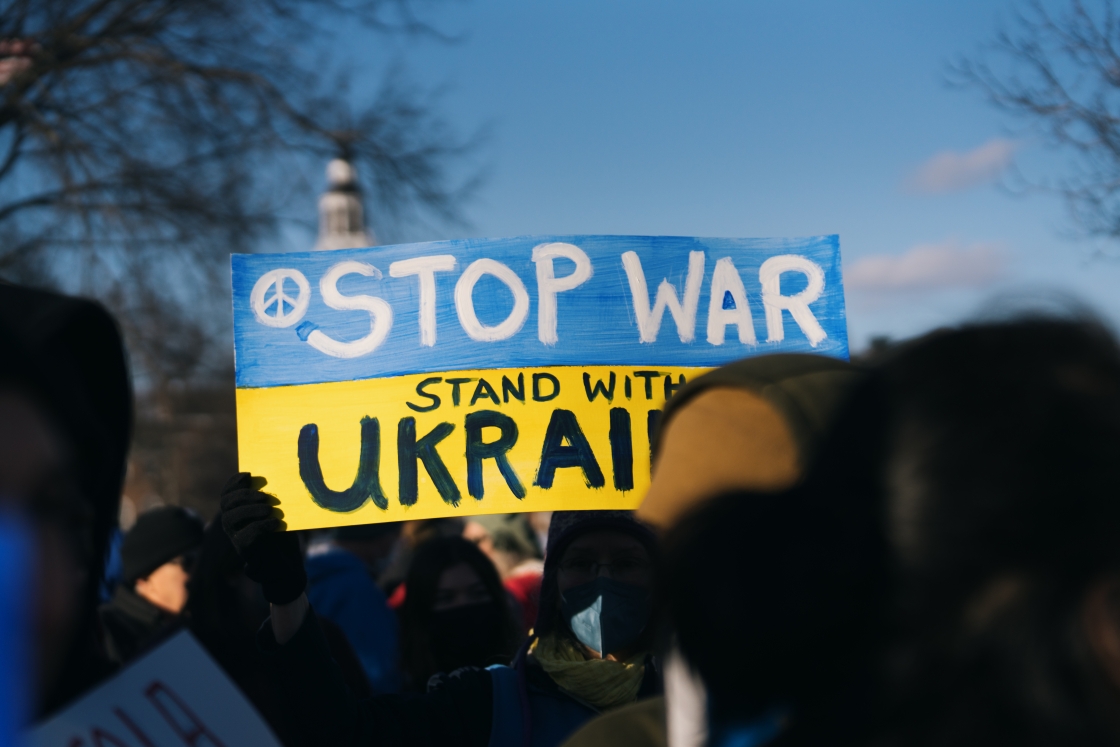 Caption
Scores of protesters, many holding signs, took to the Green on March 4 to rally support for Ukraine as deadly attacks continued following the Russian invasion. (Photo by Eli Burakian ’00)
Image 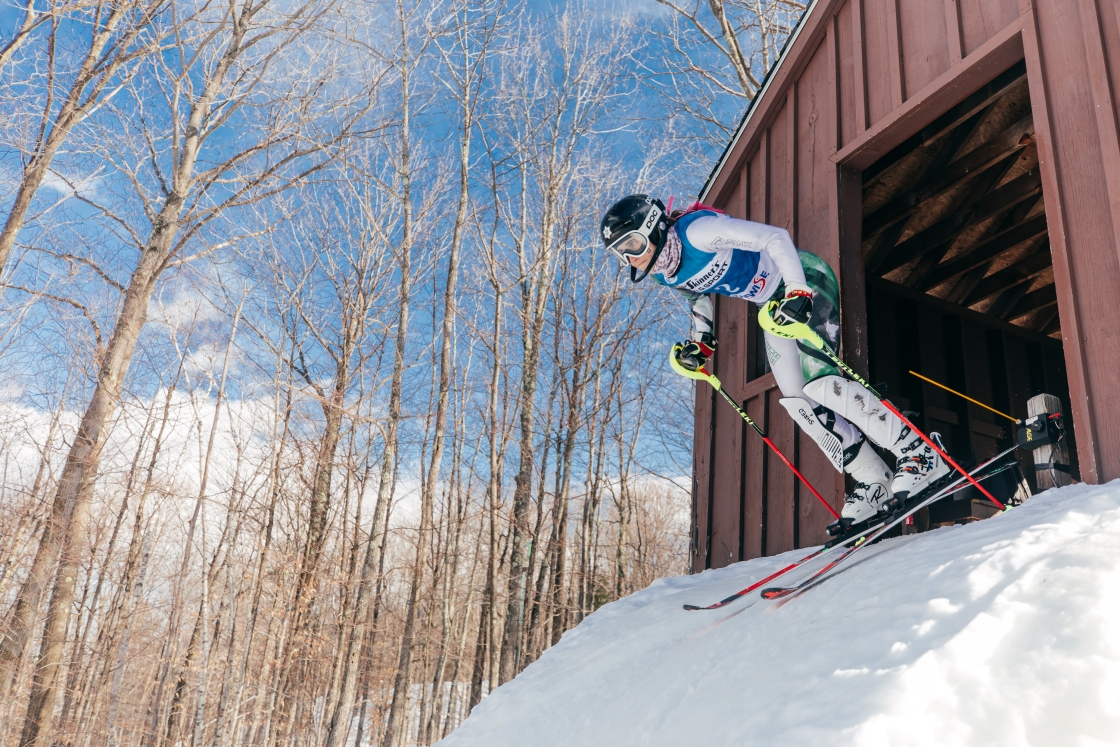 Caption
Winter Carnival 2022 included such Dartmouth traditions as the polar bear swim at Occom Pond and Alpine racing at the Skiway. (Photo by Robert Gill)